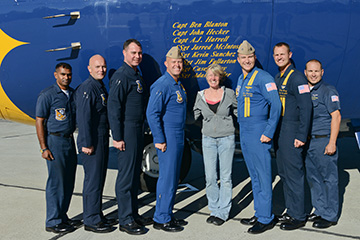 If you have ever visited the USS Hornet in Alameda for an event, you may have noticed a vivacious, funny, smiling blond, rushing around, interacting with people, talking at a mile a minute. You will also have noticed she had a large camera with a flash in her hand and a second one around her neck. You may have seen her chatting with Buzz Aldrin and the crew of Apollo 11 at the 45th reunion, and taking their photos, or at Veterans Day or a Pearl Harbor Day celebration. It’s Susan Wood, photographer extraordinaire.
Susan specializes in photojournalism. In addition to her work on the Hornet, she recorded for posterity the building of the new Bay Bridge and the tearing down of the old one, with some never seen before images. Thanks to her and the special access she was given, we have incredible pictures from the top of Yerba Buena Island, and inside the bridge structure itself. When both bridges were closed for four days while the final sections were joined, she was in the lead CHP vehicle making the final inspection and took the unique and probably once in a lifetime moment, of all toll booths closed.

Many of us living in Contra Costa have crossed the Benicia Bridge and noticed the huge collection of ships in Suisun Bay, affectionately called “The Mothball Fleet.” Now only nine remain, but there were up 350 at its peak.
Susan photos of the ships themselves are impressive, but her inside pictures tell a never to be forgotten story. It took her three years to obtain permission to go below decks. Of particular interest to naval enthusiasts are her photos of the now scrapped Sea Shadow (IX-529) an experimental stealth ship built by Lockheed for the United States Navy that was kept in a massive, eye-catching covered barge.

How many people can say they have flown with the Blue Angels? Nobody is ever allowed to ride in those special planes, but Susan flew in their support plane nicknamed Fat Albert, the C130 that carries all their spares, equipment and supplies. While her photos of their breathtaking displays at Fleet Week have appeared in many publications, what is perhaps more impressive is her record of what takes place behind the scenes. Given special and rare access, she has captured for all of us, the military precision and synchronization of every single action and moment of their preparation.

If you ask Susan what was her most satisfying experience, her face lights up and without hesitation says, “it’s working for my kids in Honduras.”
For the past four years, she has donated her time as a photojournalist and traveled to a very remote part of the country to work on a humanitarian project. Spearheaded by the Rotary Club of Concord and supported by other local clubs, including her own in Pleasant Hill, 30 schools are being provided running water for the first time. New bathrooms are being built and 800 teachers trained in a new hygiene/sanitation curriculum. She has already produced a short five-minute video on Youtube and is developing two short instructional videos for teachers.

When not traveling Susan’s services are in demand by local corporations and businesses and she frequently works in her studio in Pleasant Hill doing family portraits. Check out the website of this extraordinary lady, she’s your neighbor: www.susanwoodphotography.com.