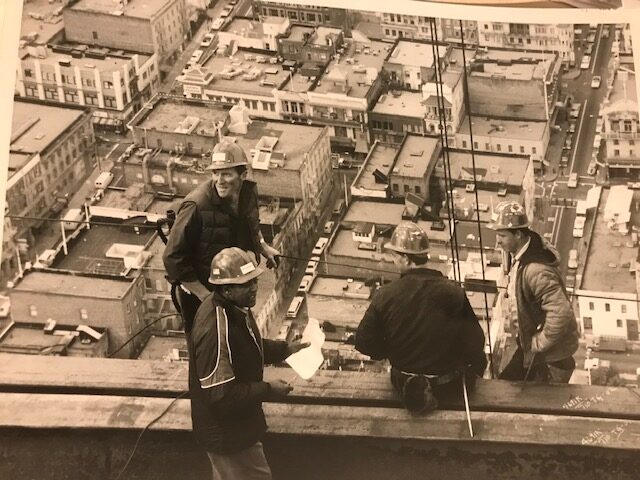 We think we know our neighbors. Even though we may have been living in the neighborhood for many years, if we dig a little deeper, we might find things that will astonish us, or reveal heroes among us. I recently discovered that the real Man-of-Steel lives in Clayton.
Gary Boswell is a tall, grey-haired, soft-spoken man, but get Boswell talking about construction and he becomes a different person. With Superman-like hyperbole describing his life’s work, there is not a bridge plus a few of the most iconic buildings in the Bay Area that Bowell has not help erect – feats so significant to our local infrastructure that it helped catapult the Bay Area into one of the world’s greatest economies.
His eyes lit up as he told me about his family. His grandfather, father, two uncles and a cousin were all ‘skeleton’ steel erectors, and he continued the family tradition, almost straight out of high school. A building skeleton is a steel frame constructed to support a large skyscraper or building made out of metal beams forming vertical columns crossed with steel girders for stability.
His first job was on the San Mateo Bridge, but later he worked on the Antioch Bridge, Bay Bridge, Benicia Bridge, Carquinez Bridge, Golden Gate Bridge and the Richmond Bridge.
After the Loma Prieta earthquake, he was a General Foreman on the Cypress Freeway working with UC Berkeley to stress test the remaining structure, and as he describes it, was one of the most nerve-wracking experiences of his career.

Until recently, the Bank of America Building was the tallest skyscraper in San Francisco. Boswell worked on that also. However, his real claim to fame is that he was responsible for the topping out moment on the 853-foot Pyramid Building in the financial district. When the last steel beam was raised in place at the highest point of the building, a small evergreen tree (known as the construction “Christmas tree”) was attached to the beam with an American flag put on the opposite end. The men working on it signed their names on the beam. In addition to having his name there for posterity, Boswell fastened the last piece of steel. Once a much-scorned project, the Pyramid is now a premier tourist attraction.
Boswell also worked on the massive structure at the NASA Ames Research Center in Sunnyvale. It is hard to miss as it is the largest of its kind in the USA. Its mouth sucks up air from across the Bay and spits it out with such force planes are not allowed to fly above it.

Yes, the real Man-of- Steel is our neighbor, a California native born in Pittsburg. He graduated from Pacifica High School in Bay Point where his football prowess as a wide receiver got him selected as All League.
Now enjoying retirement, when he is not playing golf with Branch 116 of the SIR Organization, open to all retirees (Social Activities for Retirees: https://sirinc2.org/branch116), he spends his time with his high school sweetheart – now wife of 57 years, Bonnie, two daughters and grandchildren.
Sometimes we think we know our neighbors and our neighborhoods. I love talking with people and getting to know a little of their background, their history, their interests and their dreams. I have found an amazing pot of gold, overflowing with riches of lives, of incredible experiences and a creativity after retirement that is off the richter scale.