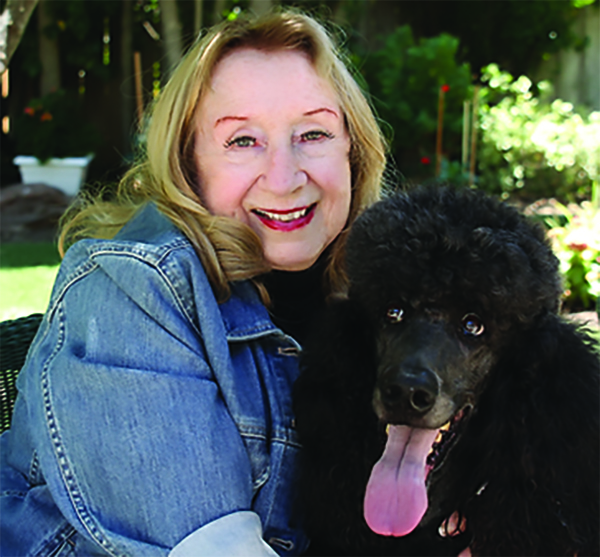 The dog rescue community recently suffered an inestimable loss of a leader. Patty Moulthrop of NorCal Poodle Rescue (NCPR), who passed away in February, 2022.
Blue Skies Standard poodle breeder, Patty Moulthrop, considered poodles to be bright, beautiful, sensitive, and graceful dogs. At Blue Skies, Moulthrop successfully bred and produced award-winning black standard poodles throughout the west coast including five multiple all-breed Best in Show winners. In 2000, Moulthrop had the highest-ranking poodle in the U.S., with 52 all-breed Best in Show wins.
In 1985, she founded NorCal Poodle Rescue (NCPR) in 1985 because she couldn’t justify breeding poodles when she knew there were poodles in shelters that needed homes.
Moulthrop became an advocate for homeless poodles. She printed announcements and distributed them to local vets, shelters, and groomers and soon began rescuing poodles. She initially rescued and rehomed poodles by herself and then enlisted the help of other poodle lovers. But when she began receiving 20-30 calls a day, she realized she couldn’t do it alone. Moulthrop reached out to other poodle owners and established NCPR. Under her watch, about 3,000 poodles and poodle mixes have found their forever homes.
Through the dedication of two dozen volunteers, NCPR rescues all three varieties of poodles and poodle mixes from private individuals and shelters. They’ve recently seen an increase in surrenders from the ill or elderly who are no longer able to care for their dogs.
NorCal Poodle Rescue is a tax-exempt organization under Section 501(c)(3). Most of their funds goes to veterinary care and only 3% of their budget is allotted to administrative costs. In addition to tax-deductible donations, you can support their rescue efforts by sponsoring a poodle, or volunteering to photograph the dogs. Fosters are needed in Concord and elsewhere in the Bay Area. Contact them at norcalpoodlerescueinc@gmail.com.
You will be missed Patty Moulthrop.

Bone to Pick
Possible Distemper Outbreak in Bay Area. According to SFgate.com, San Rafael rescue group WildCare has noticed an outbreak of the distemper virus over the past two years. Distemper is often fatal to dogs, and those that survive usually have permanent, irreparable nervous system damage. Fortunately, canine distemper is not transmissible to humans. Please make sure your dog is up to date on his/her vaccines. If you see skunks, raccoons, foxes, coyotes acting abnormally do not approach, but please call the California Department of Fish and Wildlife Bay Delta office at (707) 428-2002.