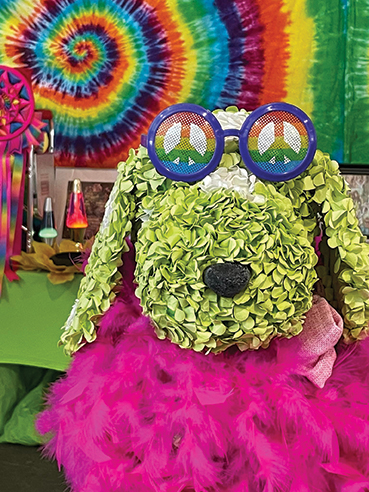 Woofstock, ranked as one of the top American Kennel Club (AKC) dog shows in the United States, is a favorite of confirmation dog show judges and the dog exhibitors from across the country (and internationally) who are vying for the coveted Best in Show title.
Yet, this amazing four-day event hosted by Contra Costa Kennel Club (CCKC) at the Solano County Fairgrounds June 9-12 is surprisingly understated locally.
With roughly 2400 dogs each day, tallying over 8000 entries, it is a dog lover’s paradise adorned in iconic fashion.
The show’s theme is a parody of the infamous Woodstock. Owners, handlers and judges alike come out in full hippie regalia including bell bottoms, fringe jackets, paisley and tie dye attire, and floral headbands. Continuous Woodstock era music is playing over the PA and in the rings. Sixties era merchandise is everywhere. Who doesn’t need a new lava lamp? Or to score some CBD for your canine to feel fine?


Over 350 RVs were snuggled in the fairground parking lot. Most of the participants know each other as they compete in several shows throughout the year.
The process of selecting the best of the best is fascinating. For a first-time attendee, the judge’s task may seem impossible. How does one compare the attributes of a Chihuahua to a Great Dane to pick a winner? It turns out the dogs are competing to best meet a written standard for their own breed. Connecticut-based Judge Abby Patrizio, one of 60+ judges, sat with me in the judge’s observation area, and gave me a crash course in the judging process.
According to Mireille Bischel, the Show Chair and President of Contra Costa Kennel Club (CCKC), Woofstock launched in 2008. This year’s show was jointly hosted with the Yosemite Kennel Club.

Bichell introduced me to Bob Birdwell, a long-term CCKC volunteer who’s overseen the music since Woofstock’s inception. To select the Woodstock era tunes, he sometimes makes a bit of fun of the judges.

“For example, for Judge John Ramirez,” Birdwell explained, “…maybe ten years ago, he was in a dog show calendar called The Naked Truth that had a picture of him laying on a bed, so for him I played Calendar Girl.”

Birdwell further explained his selections. “When she makes a cut for the 6 or 7 dogs that she wants to consider further, I usually play a song that’s got a theme like “Why do I have to choose?”

A separate competition called Junior Showmanship is where handlers between the ages of 8 to 18 are judged on how well they show the dog. But Junior handlers can also show in rings where the dog is judged. Best Junior Handler, Brielle Villarreal, has been showing dogs since she was 8 years old. She and her bulldog, Olive, have been learning the ropes for seven years now.

“I take a lot of pride in bringing recognition to my breed, and that’s what I intend to do in the future,” Villarreal said. Villarreal went on to Westminster with her bulldog the following week.
Group competitions slate the best individual dogs within a specific breed against other breeds in their designated group. The seven groups are working, herding, toy, hound, terrier, sporting and nonsporting. The top four dogs in each group receive an award, with the first-place winner moving on to the Best in Show competition.
“What the judge is looking for is how does each of those individual breeds meet the described standards of the AKC?” Patrizio said. “Can that dog do what it was bred to do? She also described the importance of temperament. “Does the dog have confidence? Is it unsure of itself?
The next group entering the ring was the working group, which includes up to 31 breeds. Every judge must also be a breeder and Patrizio’s breed is Bernese Mountain Dog. Because the largest dogs are often judged first in the group competition, a Great Dane was up.
“Great Danes should be the Apollo of the group,” Patrizio said. “It should be noble and regal and stand proud. They were originally bred to take down wild boar.”
As applause erupted for a Bull Mastiff, Patrizio indicated judges should also not be influenced by the crowd’s cheers.
When asked about the hazards of judging, Patrizio said very few people bring a truly aggressive dog to a dog show, but an Akita puppy once bit her forehead. It never returned to the ring, she explained. But AKC has procedures for reinstatement.
It is no small feat to become an AKC conformation judge. Prospective judges must have a minimum of 12-years’ experience in the breed they propose to judge. Besides taking workshops and gaining ring experience, they must have bred and raised at least five litters in their own home, and breed or own four or more champions.
Whistles and clapping filled the air, drawing our attention to the ring as the seven winners entered. The Sporting Group was represented by a Weimaraner, the Working Group by the Standard Schnauzer, the Nonsporting Group by the Keeshond, the Herding Group by the Shetland Sheepdog, the Terrier Group by the Smooth Fox Terrier, the Hound Group by the Long-haired Dachshund, and the Toy Group by the Affenpincher.
The Judge first selected the Affenpincher as the Reserve Dog. If the Best in Show winner is disqualified, the title and ribbon go to the reserve dog. Then with the giant Best in Show Ribbon in hand, she pronounced Roam, the Weimaraner, as Best in Show.

Pautz and Roam, as were many other exhibitors, rushed off to travel to the Lyndhurst Estate in Tarrytown, NY for the upcoming Westminster Dog Show, where they will pursue another Best in Show title—this time without the tie dye.

Jill Hedgecock writes Diablo Gazette’s dog rescue column, Ruby-dooby_do to the Rescue and is the author of two dog inspired novels, Between Shadow’s Eyes and From Shadow’s Perspective.