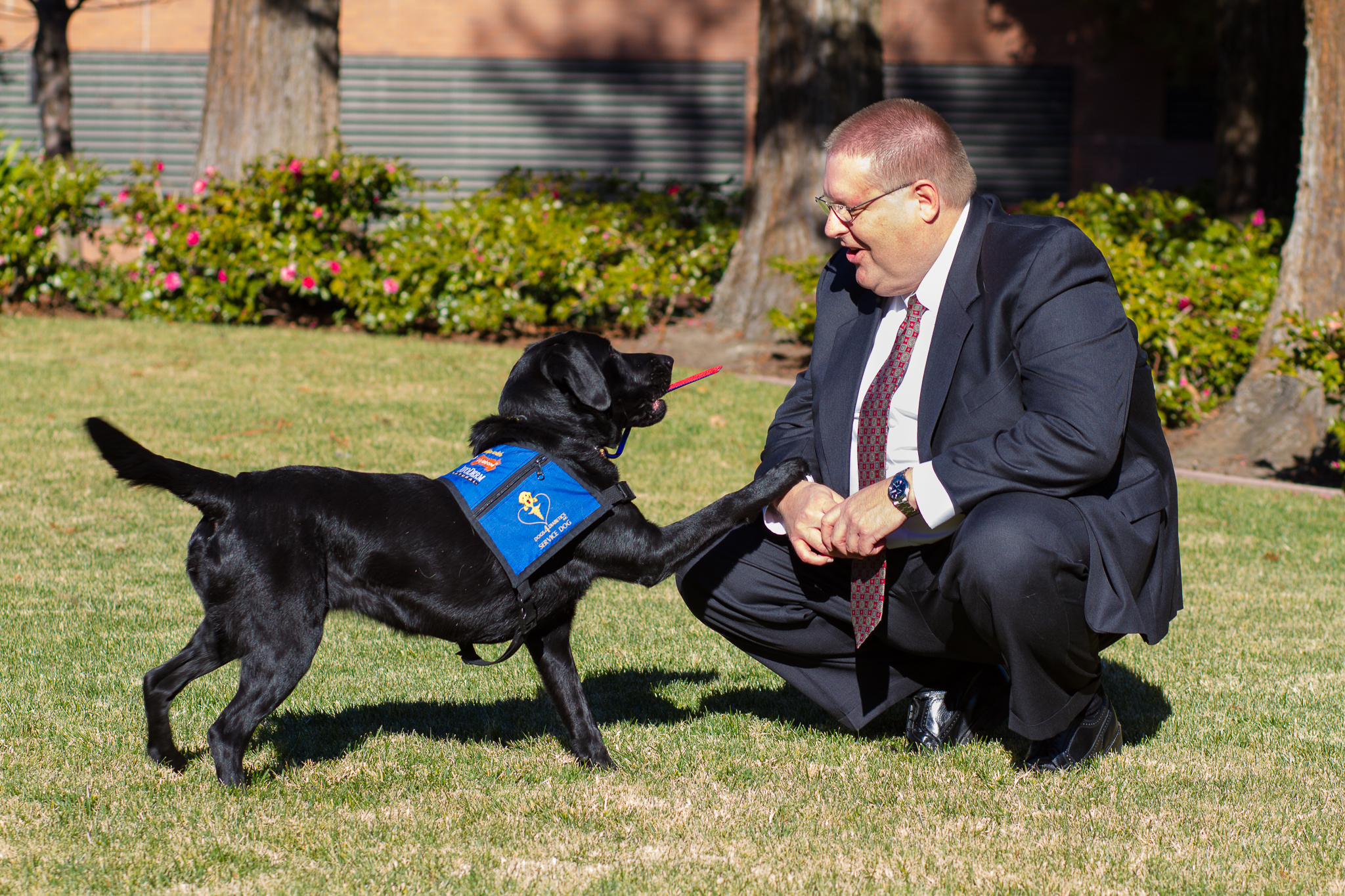 Clayton’s Mark Ruefenacht’s unique background as a self-described science nerd with expertise in criminal forensics, a diabetic, and a man with expertise in training guide dogs combined with Jeannie Hickey, a diabetes specialist from Kaiser who is also a diabetic, led to the discovery of a life-altering breakthrough of the decade for diabetics: diabetic alert dogs.
Dogs4Diabetics (D4D) was established in October 2004 and provided the first accredited service dog for insulin-dependent diabetics under Assistance Dogs International. Little did Mark Ruefenacht know that 11 years later, he and his dog, Armstrong, would be recognized in the Guinness Book of World Records as the first scientifically trained diabetic alert team.
Ruefenacht, a Clayton native, is an insulin-dependent diabetic with a family history of blindness because of diabetic retinopathy. It makes sense that he would volunteer to raise puppies for Guide Dogs for the Blind of San Rafael, California. Mark’s career, which entails quality assurance of precision measurements, involved testing breath analyzers to ensure the devices gave accurate readings for alcohol content back in 2000. During a business trip around this time, Mark’s blood sugar dropped and his Guide-Dog-In-Training sensed something was wrong. This was a moment of inspiration for Ruefenacht when a simple question arose: I wonder what a dog can smell on a diabetic’s breath?
Mark didn’t let this musing slide away as idle curiosity. Four years of research ensued.
“We were interested in training the dogs on low blood sugar because that is the most debilitating,” Ruefenacht explains. “Within 30 minutes you can be unconscious, within an hour to two hours, you can be dead.”
Insulin therapy triples the risk of hypoglycemia or low blood sugar. Because all insulin-dependent diabetics are guaranteed to have hypoglycemic episodes, and 2 to 4 percent of diabetic deaths are due to hypoglycemia, a D4D dog can save lives. In fact, 55 percent of hypoglycemic episodes occur at night and most diabetics do not awaken, so an alert from a D4D dog can be crucial.
Ruefenacht and Hickey were able to prove that dogs could indeed smell a change in diabetics when their blood sugar changes in both their breath and their sweat. But Mark had another hurdle in his quest to train diabetic detection dogs.
“The question we were pursuing was if we trained a dog on my odor would it be universal to another diabetic?” Mark explains.
The opportunity arose to test this hypothesis when Jeannie had a hypoglycemic or low blood sugar event. She dotted her sweat on a paper towel and brought it to Mark. Jeannie marked it with a small x and buried the scented towel in a trash can in his bathroom with other towels. Then he told his dog, Armstrong, to find the scent. When Armstrong picked out the correct paper towel and brought it to Mark, he knew that he was on the path to establishing his first diabetic detection dog.
But there was yet another obstacle to solve. How would he train the dog to alert its human that there was a problem? Barking was not an option because service dogs are not permitted to make noise in indoor public places. Natural behaviors such as sitting or pawing could be misinterpreted. A bell or buzzer would not be available when the human partner was performing day-to-day activities such as grocery shopping. An object on a belt also wouldn’t work if the human was in bed.

Mark landed on a bringsel, a soft canvas stuffed sleeve that hangs from the dog collar. When the dog senses a problem, it puts the bringsel in its mouth and makes physical contact with his human.
While technological advances such as insulin pumps and continuous glucose monitors are now available, D4D’s scent-trained dogs can detect changes in blood sugar 20 to 30 minutes before the newest medical devices. Once a diabetic receives a D4D dog (at no cost), the organization supports the team for life. To date, D4D has placed about 200 dogs with qualified diabetics. One client, Kim Denton, described how life changing her D4D dog has been.

“I cannot tell you how exciting it was to once again be able to take day-long drives into the country with my camera (and now dog) in tow, to go for hikes along the Berkeley Marina/Bay Trail, and even to just be able to exercise – all without having to worry about my blood glucose tanking just as I got started!” says Denton.

Kim went on to describe how special her relationship with her D4D canine partner is.
“Troy always has my back,” she says. “When home alone, Troy sits in my lap and won’t get up until he knows my glucose has reached a safe level again. Plus, if I ask him to, Troy brings me my glucose tablets as soon as he alerts me to my rapid drop. The worry of being alone with a dangerous low is next to nil with Troy by my side. We have a trust that is amazing, and I love this guy tremendously.”
Ruefenacht understood early on how critical it is for the dog to be accurate for the sake of the diabetic. While many Medical-Alert Service Dogs only perform at 50 percent detection, D4D dogs are trained to detect changes in blood sugar at a minimum of 90 percent accuracy and a reliability as high as 99.73 percent . They strive for this high standard of performance to ensure the safety of the diabetic.
The dogs are “career change” dogs that are repurposed from their trusted partners, Guide Dogs for the Blind and Canine Companions for Independence. Professional trainers train the dogs using humane practices, like positive-reinforcement, marker-based training, and food rewards. It isn’t all work for the dogs, D4D take them on adventures that expose them to a wide range of life experiences.

D4D has evolved and is now the National Institute of Canine Service and Training (NICST). A trailblazer in medical and wellness service dogs, they also support First Responders dealing with post-traumatic injuries and are working on cancer detection. First Response trained dogs provide stability to those who serve us during times of crisis and emergency. NICST and UC Davis are currently conducting a study to determine if dogs can detect head and neck cancer. These cancer types can be very hard to diagnose, and the goal is to train dogs that are able to screen for this disease, for early diagnosis and treatment.
Ruefenacht has received many accolades for his pioneering work. In addition to being listed in the 2015 Guinness Book of World Records, in 2010, Bark Magazine recognized Mark as one of the 100 most innovative dog trainers in the world.
D4D spearheaded the concept of medical assistance service dog. Prior to Mark’s innovative use of dogs to help diabetics, except for seizure response dogs, the concept of medical assistance dogs didn’t exist. Mark describes a defining moment in his endeavor when the American Diabetes Association described his discovery as the breakthrough of the decade. But Mark added that wasn’t the most important outcome of his work.
“There’s a child walking today because of the dog,” Mark says. “And it’s not just a child. I’ve heard this story several times from adults. ‘The dog saved me.’ That’s the pleasure in the whole thing.”

Mark laments that demand for diabetic service dogs can often outweigh community needs. Fortunately, a new arrival to D4D, Captain America, an 8-week old puppy will soon mature and learn the ropes. Because of this pup and many other dedicated dogs, the lives of more diabetics will be forever enriched, and perhaps, saved. To learn more about NICST and D4D or make a donation, visit https://ourdogssavelives.org.
Jill Hedgecock writes Diablo Gazette’s dog rescue column, Ruby-dooby_do to the Rescue and is the author of two dog inspired novels, Between Shadow’s Eyes and From Shadow’s Perspective.