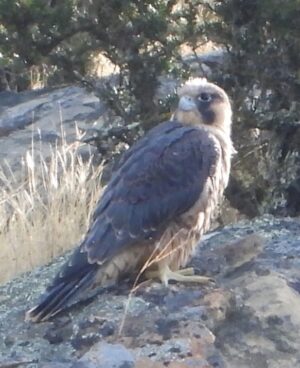 If you ask most people what the fastest animal is, they’ll say the cheetah. And that would be true for land mammals, but the animal with the “Ferrari F40” title is the peregrine, a bird of prey about the size of a crow with a wingspan of 2 to 3 feet.

During an aerial dive, this bird can reach over 200 miles an hour. Peregrines need for speed comes from their unique mode of hunting on the wing called stooping, which requires them to generate high aerodynamic forces that enable them to perform precision maneuvers to catch airborne prey, mostly other birds and bats.
Researchers at the University of Oxford have discovered that peregrine falcons engaged in stooping use the same steering mechanisms as guided missiles. In essence, the birds remain on target with their prey by tracking changes in their line-of-sight. Interestingly, high-speed stoops do not require faster reaction times than slower attacks.
Unfortunately, populations of these marvels of the sky plummeted in California after World War II. Dating back to the late 1800s, peregrine falcons had nested locally in specific rockfaces in the Pine Canyon area of Mount Diablo. But breeding peregrines disappeared by the 1950s due to a variety of human interferences.
Doug Bell, a Bay Area native, long-time birder, and the Wildlife Program Manager for East Bay Regional Park District since 2005, indicated that historically, the rust-colored peregrine eggs produced at this nest were highly sought after.
“Oologists, or egg collectors,” says Bell, “could sell these eggs to collectors worldwide for a high price. Historical records indicate that competition was so fierce for falcon eggs that two oologists had a shootout over peregrine eggs at Pine Canyon in the 1800s. Fortunately, no one was hurt.”
Up until the 1940s, private individuals in the U.S. could legally collect and sell birds’ eggs without a permit. It is now illegal in most countries, but the problem persists in England.
Bell indicated that confiscated eggs have been put to good use. To support research and education, many otologist’s collections have landed in museums and universities, including the California Academy of Sciences and U. C. Berkeley.
Egg collection resulted in the reduction of peregrine populations over time, but it didn’t explain the dramatic declines in the late 1940s. Scientists soon discovered the culprit to be the pesticide DDT.
When peregrines ate birds that had eaten DDT-laden insects, the breakdown product, DDE, accumulated in the falcons’ tissues.

The elevated DDE concentrations altered the female falcon’s calcium metabolism, which resulted in thin eggshells that cracked during incubation, preventing the fertilized eggs from developing into chicks. By 1965, the peregrine was extinct east of the Mississippi and there were only 39 known pairs west of the Mississippi. The decimation of their populations also took the birds to the brink of extinction in California. Only one nest could be found in our sunny state in 1970.

Bell remembers riding his bike to Castle Rock as a kid and looking for the nesting peregrines. “One of the saddest things was going to the cliff site, looking at the beauty, and not finding the peregrines. I had this feeling like something was missing. The silence was deafening.”DDT was banned in 1972. This action, along with captive-breeding, and the bird’s adaptability to utilize manmade buildings as nest sites, allowed peregrine populations to bounce back.
Peregrines were removed from the Endangered Species List on August 25, 1999. The U.S. Fish and Wildlife report that there are now about 400 breeding pairs across the Golden State. Nonetheless, peregrines remain a fully protected species in California.
In the 1990s, the East Bay Regional Park District and Save Mount Diablo teamed up to plant captive-bred peregrines into the nests of the more common prairie falcons. Rock climbers added peregrine chicks to these nests and the prairie falcons fed them as their own. The prairie falcons occupied the peregrine’s former nesting grounds at Pine Canyon at the foothills of Mount Diablo and the hope was that the peregrines raised in these nests would return to mate someday.
Peregrines have specific breeding requirements. At about 2 years of age, the male, called a tiercel (only females are technically called falcons) will perform aerial courtship displays. If the female chooses him, they will generally mate for life, often using the same nest site. The nest is typically a depression in a cliff ledge so nest-building is essentially nonexistent.

The female will lay three to five eggs and the incubation period is about a month. At about six weeks of age, peregrine chicks will learn to fly and about four weeks later can hunt their own prey.
Life is precarious for young peregrines in the wild and only about four in ten will live to one year of age. The survivors that beat the odds can live to be up to 15 years old.
At the Mount Diablo breeding site, it was found that the birds were highly sensitive to human disturbance during their nesting season. As a result, since 2015, a section of Pine Canyon on Mount Diablo is closed to all access from February 1st to July 31st, giving the birds time to select a nest site, lay eggs, hatch their young, and then raise them until their offspring become independent.
To keep people away from the nests, volunteers in a program called The Peregrine Team, are stationed near trailheads to divert rock-climbers and hikers from the area. The Peregrine Team was formed and is currently led by Staci Hobbit, a natural history docent for Mount Diablo Interpretive Association.

One member of the team, Rosita Ortega Harvey, has been volunteering since 2016. The experience has been life changing for her.

Harvey has learned a lot about peregrines since she started volunteering. She and her Peregrine Team partner use a spotting scope to monitor the bird’s behavior. She was curious about where the adults stay at night. She learned that when the chicks have enough feathers, the adults sleep in different cavities from the chicks. This year there were four chicks on the nest. The female, who does all the incubating, left the chicks at night after a week.
“The learning comes from observation,” says Harvey. “I never learned this in books, only from watching.”
In 2020 two breeding pairs of falcons were observed in Pine Canyon. Unfortunately, no chicks were hatched. This year four chicks appeared in the nest. Let’s hope this trend continues in 2022.

The area closures, along with volunteers have clearly helped the breeding pairs on Mount Diablo. To learn more about peregrines at Mount Diablo, watch the You-Tube film called “Return of the Pine Canyon Peregrines.”To become part of the Peregrine Team in 2022, visit www.mdia.org/peregrine-team.
The Peregrine Team banded 7 chicks on Mt. Diablo this month. Only two pairs existed in CA about 50 years ago, now there are 400. The remarkable recovery of an endangered species is a testament to the resilience of wildlife and the dedication of many biologists and concerned volunteers. Out of this amazing success story, one can only wonder what else is possible. Will our Bay Area skies someday hold soaring California condors again?

Jill Hedgecock has a M.S. degree in Environmental Management and a passion for wildlife conservation. She is the author of the novel, “Rhino in the Room.”