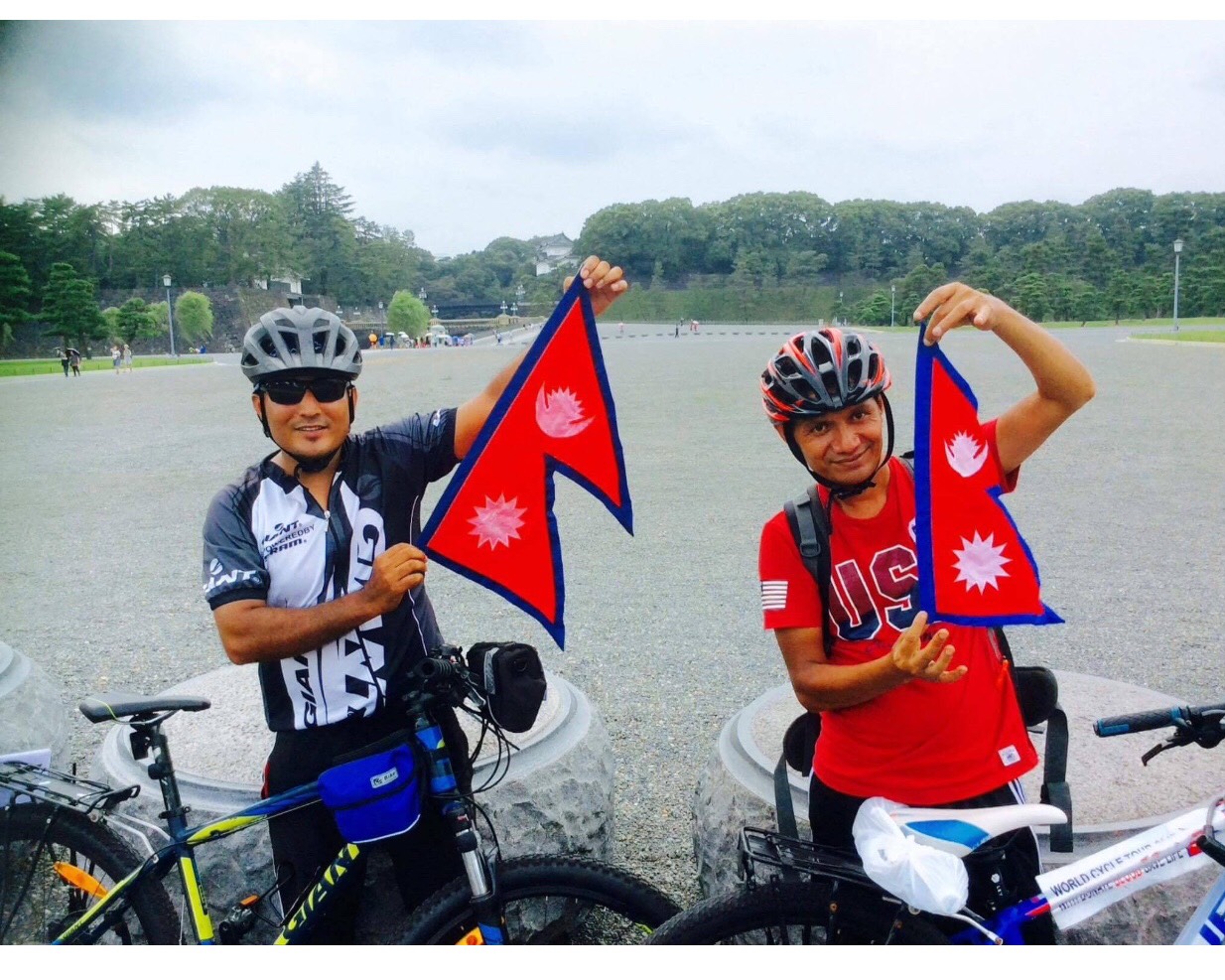 Two Nepalese cyclists who are two years into a 5-year mission that began in Nepal to travel around the globe on bikes found their quest temporarily stalled in Concord. Concord was never on the destination plan. It’s part of the experience of executing an impromptu publicity campaign meant to raise global awareness for blood donations for Red Cross.
Nepal suffered a devastating 7.8 earthquake in 2015 that killed 9,000 and injured nearly 22,000. Yubaraj Mainali, of Jhapa, Nepal was a volunteer to gather food, water, and supplies for its people. One of the issues Nepal suffered in the aftermath was an acute shortage of blood in the blood banks.
“In Nepal, there’s a misconception among the citizens that donating blood harms the body. So, there is a shortage of donors in Nepal,” explained Mainali, who is a regular blood donor himself.
Mainali decided to help the Red Cross in a bigger way. He embarked upon a publicity campaign to raise awareness about blood donation by cycling across his country of Nepal. “As a regular donor, how can blood donations be bad for the body if I can ride across the country,” he rationalized.
He bought a bike for about 10,000 rupees (roughly $1000) and started his trek with approximately 1000 rupees in his pocket, ($10). He packed lightly, including a light, sleeping bag, medical kit, repair kit, and water. The rest he would rely on the generosity of the locals for food and room and board. Each day, Mainali pedaled his way roughly 100 miles from town to town.
He has run into issues. “There are days that you have to go without food, Mainali said. “In the city of Pokhara, my bike was stolen.” Fortunately, someone gifted him a new bike to continue his mission. These are just part of the experiences and the thrill of the journey to a traveler.
Along the way, he met Bhesh Bahadur Kadel who joined the cause. After finishing the tour in Nepal, the two decided to continue the mission and set a new goal for themselves, 150 countries in five years relying entirely on the generosity of the citizens of each country.
“There should be no scarcity of blood in the world,” Mainali insisted. “We would make a light plan, but couldn’t be certain we would do this or that at a particular place because when we reached that place, the situation would be different.”

On March 11, 2017, the two entered into India. There they met and was photographed with Govinda and his wife. Govinda is a popular movie actor in India. “That was exciting.”
Each day they received love and took risks, but it gave them insights about a different world. “The unimaginable visits and incidents were like dreams,” Mainali said.
In Tokyo, Japan, a girl proposed to him. In Korea, they had to work for 15 days to earn $300,000 rupees ($3000) to manage money for travel.
In rich European countries, they spent nights sleeping in the cold.
They were looted in the jungle when going to Singapore from Malaysia.
While on a highway in Singapore, they were stopped by the police. “You are not allowed to ride a bike on the highway there.” After explaining to the police that they were unaware of the law and of their mission, the police decided not to punish them and instead escorted them reiterating the countries rules.
Going through poverty in Laos, Cambodia, and Vietnam was very risky. Thailand they enjoyed.
In Taiwan, Japan and Korea they had language problems. In Korea, he tried using sign language when asking for a bathroom. He used his small finger to indicate he needed to pee and was scolded by the offended woman that told him that sign meant “I love you.”
Out of money in Japan, they met Korean honeymooners in Fukuoka who gave them a ride in their motorboat into Busan, South Korea.
They’ve since learned when entering a country to start at the Nepalese Embassy to gain Visas and get a list of Red Cross and Nepalese community groups which has been very helpful.
They flew to Washington DC from Germany. After meeting with the Nepal Embassy there, they toured around Maryland and raised enough support to fly to San Francisco.
In San Francisco, both bikes were stolen. Sameer (Sam) Devakota, owner of Momo n’ Curry, a Nepalese restaurant in Concord, has been helping them. “It’s been a long time since we have had authentic Nepalese food,” Mailani joked.
They hope to receive new bikes and the plan is to head north through Lake Tahoe and then into Canada.
So far, they have visited 42 countries in their two years of their mission to reach 150 countries by 2022. If you would like to support them contact Sam at 510-303-6546, or support the mission by making a blood donation to Red Cross.

2 thoughts on “Nepalese Cyclists World Quest Gets Stalled in Concord”