Hitchhiking from Clayton to Dartmouth!  Are You Crazy? 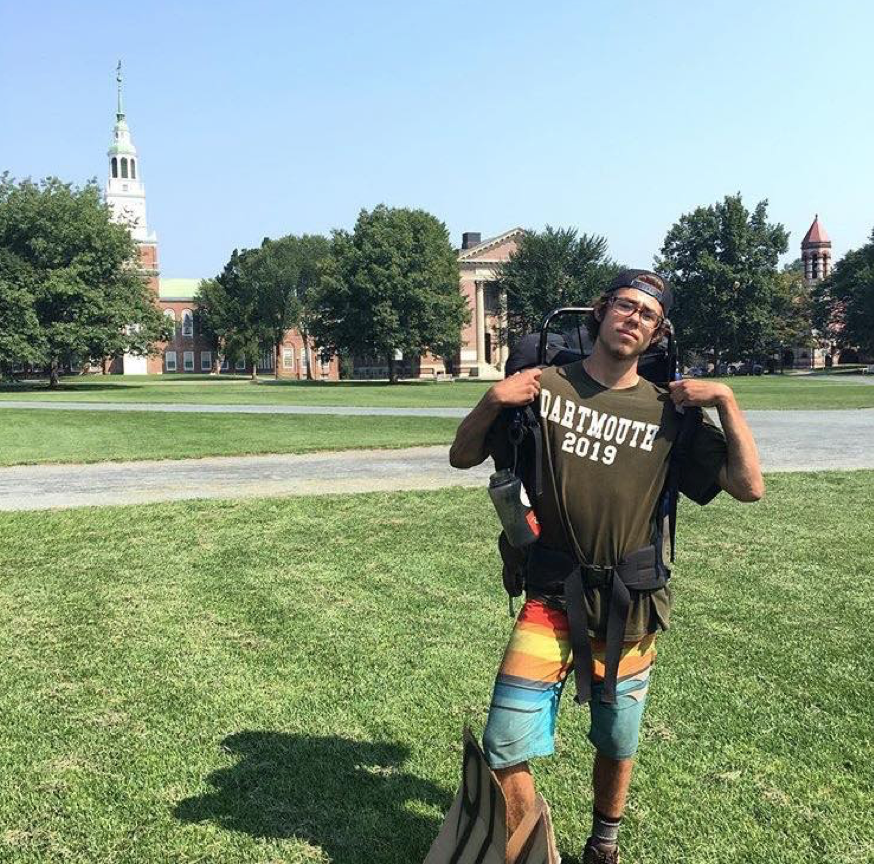 Having your children move out to go to college is nerve-wracking.  As they begin their life’s journey, you just hope and pray for the best. Fortunately,  few will start that journey the way Sam Albertson of Clayton did.  His journey/ adventure began when he decided to hitchhike 3,400 miles across the country, from Clayton to Dartmouth College, New Hampshire.

Inspired by a YouTube video called “Hitchhiking Across America”,  Albertson decided he had no plans for the remaining summer, so he thought this was his opportunity to explore the country.

“I planned on a maximum of 30 days to make it without missing any days of school.  I had enough money on a debit card to get a bus ticket if I got in a bind,”  he said.  In preparation, Albertson announced his plans on a Dartmouth Facebook page for new students and was able to find fellow students who would agree to host or meet up along the route.   He planned not to sleep in a hotel or motel — only on sidewalks, parks, alleys, and bushes.

Albertson was no stranger to hardship.   He grew up with his mother in a 300 sq. feet, 1950’s antiquated RV trailer in Morgan Territory.   Their water came from a well, but it often ran dry. Their landlord would truck water up to them tapped from a fire hydrant on Marsh Creek Rd.  Because he had no transportation,  he would have to stay at school each day until 6:30 pm, until his mother could pick him up.  He would use the time to do his homework in the school library at Clayton Valley.   Sam graduated with a 4.25 weighted GPA.  He scored a 34 on his ACT and was rewarded with a scholarship to Dartmouth.  With no car, his Mom had assumed he would just fly.  She did not know about his new plans.

Albertson packed his backpack, a sleeping bag, sleeping mat, tarp, cooking supplies and a pair of clothes and was on his way.    He packed typical backpacking food such as quinoa, pasta, peanut butter, and pita bread.  His plan would be to shop once a week to restock his backpack.  He was leaving the state of California for the first time in his life.

The journey started slowly, very slowly.   The first day he made it all the way to Vacaville. “I walked a lot that day, mostly just getting through Concord.  However, I spent the night with the person that gave me the ride to Vacaville which was a nice end to the first day.”

Day 2, he made it to Lake Tahoe where he found a campsite that he was able to negotiate for $5 with the campsite operator.  This gave him a fire pit and access to a shower. 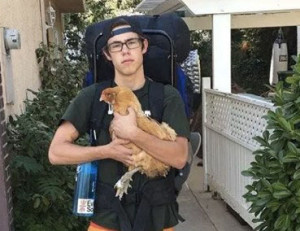 Day 3, He met up with one of the Dartmouth Facebook students at an In-and-Out Burger in Reno.  Later that evening, Albertson was picked up by a truck driver outside of Reno and traveled all the way to Iowa over the next  2 1/2 days.   He slept in the back cabin of the truck on a bunk bed.

In Iowa, he met up with another Dartmouth Facebook friend and stayed with him on his farm.  He worked on their farm for a week and experienced a bit of the Midwest life.  He was paid $120 for his work,  which he spent going to the Iowa State Fair.

Chicago.  “I made it into Chicago, where I was pretty frightened.   I had to walk through Southside Chicago at night. Southside is like the murder capital of the world,” he warned.  It was a sketchy neighborhood.  Fortunately, he was seen by a police officer but scolded, “What are you doing?  You can’t be in this place, you’re going to get shot.”

“He took me to his station where I spent that night camped on the sidewalk in front of the police station,” Albertson said.  Chicago proved to be a low point of the trip. “The homeless scene in Chicago is bad.  It’s a big issue. Chicago is tough on the homeless population. They do a good job making sure there are not people sleeping on the streets. One of the things I did for safety was pretended to be kind of crazy among the homeless.   I was dirty, with unwashed clothes, no shower, unshaven and messy hair… people tend to leave you alone.”

The next day’s forecast warned of flash flooding.    He was looking to go underground for cover.   “I was chatting with a homeless woman, and she advised that unless I was comfortable doing drugs and having all my stuff stolen, not to go underground.”  So instead he found an old storage shed in a back alley and climbed in there and slept through the storm.

Albertson’s next ride was with a tough, gruff hunting and fishing guy.  They made it into Ohio, but “About 100 miles into the ride, the driver made a (sexual pass) at me.   So I got out right after that.”   He was in Sandusky, Ohio.  “I spent the next day at Cedar Point, the roller coaster capital of the world.”

From Ohio to New York was pretty smooth.  No incidents.  In New York, I met up with another Dartmouth Facebook friend in Brooklyn and stayed for a few days.  He had a place to stay, went out to nightclubs and had food other than peanut butter to eat.

“I really enjoyed my time there.  I played chess with homeless people in Central Park who play for a living.  It was fun to meet them.” he said.   “I found the homeless people to be like other people except that life circumstances just didn’t work out for them. Most are good, sane normal people.” 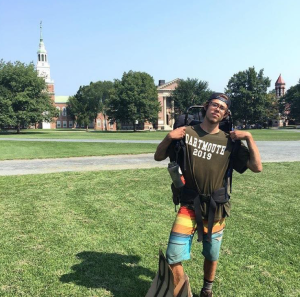 His rides through Connecticut,  Massachusetts, Vermont, and into New Hampshire were also uneventful.  Albertson said the best point of the journey was getting into New England.  “Seeing the water of the East Coast for the first time was amazing.  I then realized that I’d actually done it.”  He made it to Dartmouth in 29 Days …one whole day to spare.

Sam had taken precautions along the way.  Albertson definitely learned a few lessons and experience along the way. If I saw a river or lake, I would bathe with bio-degradable soap in them.  He bathed in both Lake Michigan and Lake Erie.   He would ask truckers to swipe their shower card to let me him in the showers at truck stops,  a tip he learned from the first trucker who picked him up.

“I would call my mother a couple of times each week, and I had a group chat with friends to update them on my progress.”  He would take a picture of the license plates with his phone before accepting any ride.   If the drivers refused,  then he would pass on the ride.  “That happened a couple of times,” he said.

He also enjoyed meeting people and experiencing the different cultures. “Each part of the country was incredibly different.  The trip  made me open to meeting new people and trying new things.”

You have to admire Albertson’s sense of adventure. Was he brave or foolish… perhaps a little bit of both? At least he arrived safely and is now enjoying Dartmouth.  The Dartmouth College paper has already written about his adventure and some NYC students are making a movie about this whole ordeal.  Godspeed Sam Albertson.