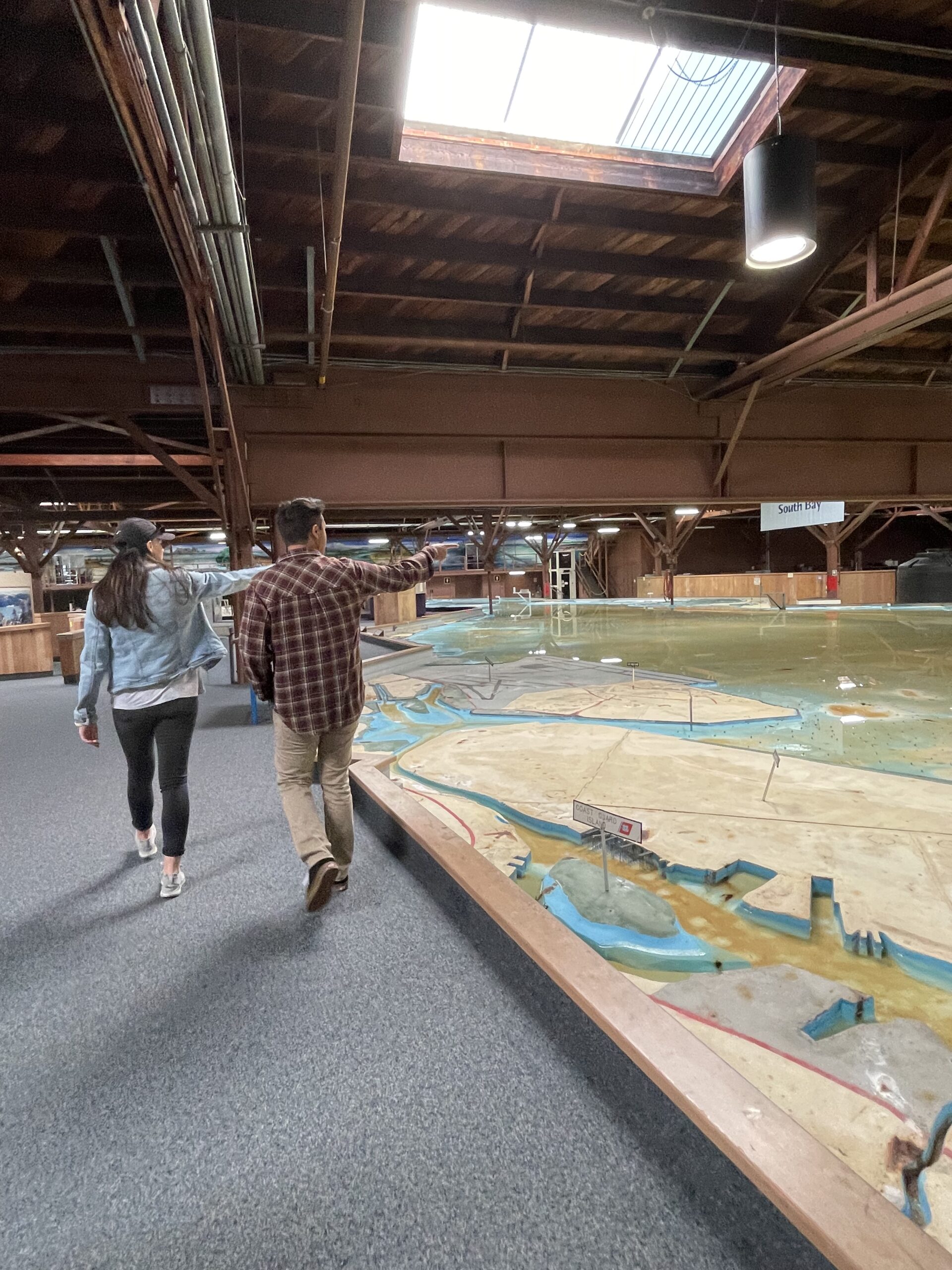 A visit to Sausalito’s Bay Model, which is operated by the U.S. Army Corps of Engineers (ACOE), might sound about as fun as attending a dry scientific lecture on tidal movement. After all, the Bay Model’s claim to fame is that it hosts a working hydraulic model of the San Francisco Bay and Sacramento – San Joaquin River Delta System. But this little-known specialty museum reveals all sorts of fascinating facts about one of the Bay Area’s most important resources: water.

A visit to the Bay Model isn’t only an opportunity to learn interesting trivia such as that Suisun Bay houses the largest remaining CA tidal wetland, because there are also exhibits about World War II, models of specialized ships operated by the ACOE, and informative signs describing the politics of water rights. There are even aquariums with live fish.
After watching a short, and very interesting, introductory video that describes the types and history of waterways of San Francisco Bay and the purpose of the model, I exited to an elevated view of the sweeping expanse of this one-of-a-kind, 1.5-acre, representation of our Bay watershed. The sheer size of the model system is impressive. The experimental equipment encompasses an area of about two football fields. It is comprised of 286 five-ton, 12’ by 12’ concrete slabs—a mass of concrete that is equivalent to a 4-feet wide sidewalk that extends for more that 2.5 miles.
The model underwent two major development phases. Between 1956 and 1957, the model represented the area from the Golden Gate to Suisun Bay. From 1966 to 1969, the Sacramento-San Joaquin Delta portion to the Bay watershed was added. Between 1958 and 2000, the model served as an important research tool to better understand water movement and other dispersal mechanisms, such as the movement of oil spills and waterborne contaminants. It has proven to be accurate in predicting the migration paths of treated wastewater and the extent of saltwater intrusion into the Delta.

To say the model is an engineering marvel is an understatement. Every 15 minutes, a full tidal cycle of the San Francisco Bay is replicated. The masterminds and dedicated workers went all-in on this project. Bert Lewis, an experienced concrete worker, became a model molder in 1957 and spent nearly his entire working life on the project until his retirement in 1995. While computer simulations have largely replaced this physical model, the Bay Model remains an important educational tool about the Bay-Delta Watershed.

Models of various ships important to maintain navigable waterways are on display in one section of the building. Of note, is a model of the Raccoon, which removes floating hazards in bay waters, and the smallest hopper dredge in the Army Corp of Engineers fleet, the “Yaquina”. This type of dredge sucks sand, silt, and mud off the bottom of navigable waterways to create deep channels for larger ships.
Informative displays about the controversial politics of water rights indicate that almost half of California’s surface water flows through the Delta. The contentious nature of dividing California’s limited water supplies is described on one information board by quoting Mark Twain: “Whiskey’s for drinking, water’s for fighting over.”

History buffs will want to visit the significance of this Sausalito property. The building housing the Bay Model was originally a shipyard warehouse that operated during World War II. An exhibit celebrates the historical importance of this key wartime facility and the women who stepped up to fill the workforce shortage.

The construction of the 210 acres of waterfront property to create Marinship entailed moving an entire residential neighborhood and a rocky hill, installation of 1000s of pipes and power cables, and dredging the Bay. Within weeks of receiving an urgent telegram, Marinship Corporation embarked on the construction of 21 buildings, 6 shipways, 2 docks, and railroad tracks. During its operation between 1942 to 1945, Marinship produced 93 vessels (15 Liberty ships, 16 fleet oilers, and 62 tankers).

As I headed toward the exit, several aquariums of live fish caught my attention, including one holding rainbow trout. This amazing specialty museum is sure to delight children and adults of all ages.

The Bay Model is located at 2100 Bridgeway in Sausalito, but the building itself is actually located off Marinship Way. Admission and parking is free. Currently, the Bay Model’s hours are Tues.- Saturday 9 a.m. – 4 p.m. Visit the website for holiday closures.

Jill Hedgecock has degrees in the Biological Sciences and Environmental Management. Her love of the natural world is exemplified in her newest novel, “Queen of the Rhino.”