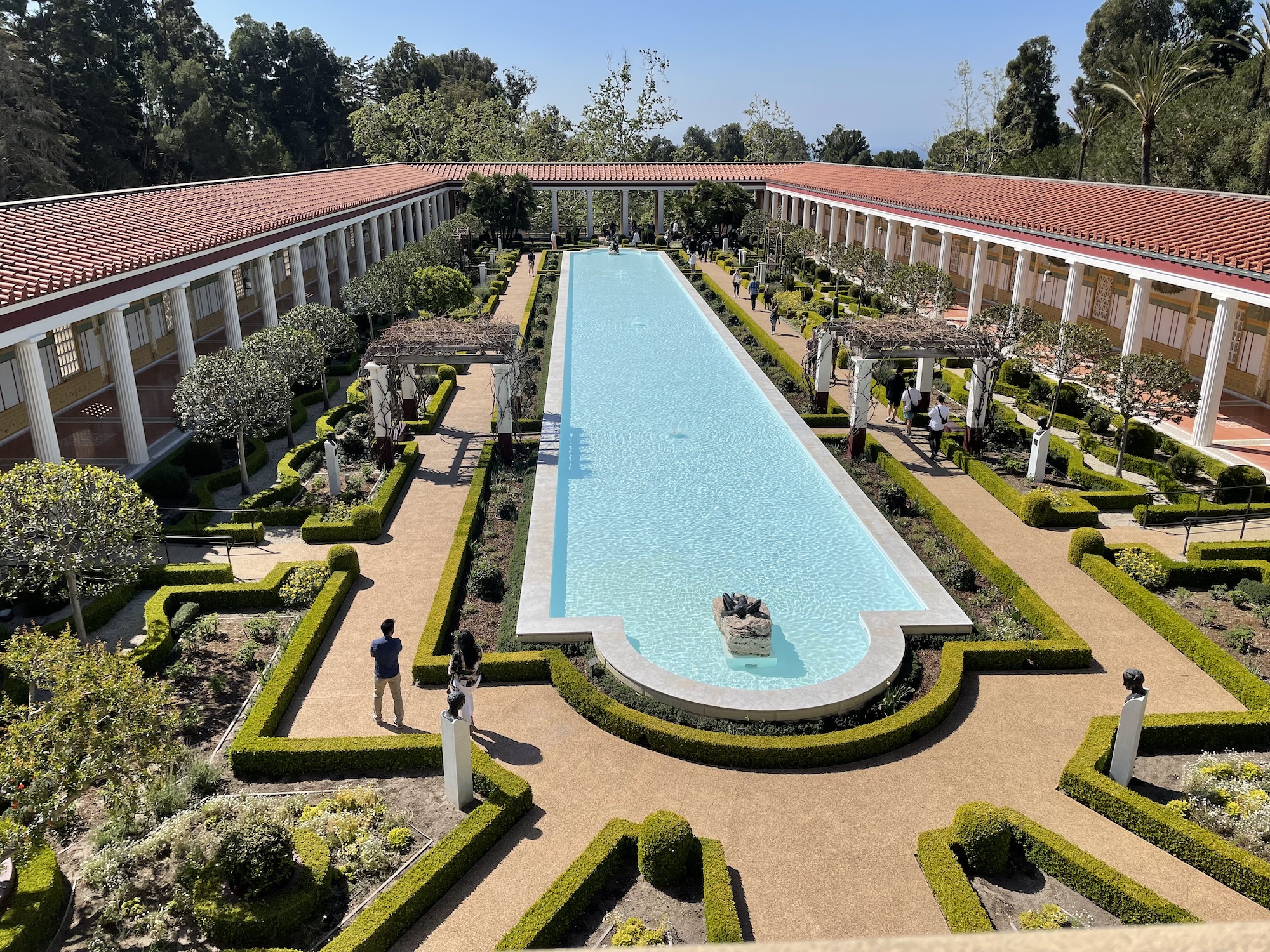 I used to hesitate to travel to L.A., all that traffic and driving through the Grapevine, but the discoveries I have made there make it worth the effort. I took a recent trip to Santa Monica and Los Angeles with my husband. We hit up the Getty Museum, The Getty Villa, The Petersen Automotive Museum, and the new Academy Museum of Motion Pictures. I found each of these to be wonderful places to visit, and only about five hours from the Bay Area, if timed right.
A charming place to stay, the Channel Road Inn in Santa Monica, was a perfect jumping off point for my excursions. With the beach less than five minutes from the front door, my husband and I took early morning strolls on the biking/walking trail known as The Strand.

They say nobody walks in L.A., but they do in Santa Monica. In fact, the beach isn’t the only place to get a good workout. We used the steep Santa Monica staircase (also used by firefighters in keeping fit) to climb out of the Santa Monica Canyon and meandered to Palisades Park. When we returned famished, the delightful innkeeper, Dominique, cooked up a five-star breakfast.

For our first excursion, we headed about 10 minutes north on the Pacific Coast Highway to the Getty Villa where I felt transported to another time and place. This fabulous world-class museum was originally built by J. Paul Getty adjacent to his home to display his personal art collection to friends and family.
The building and gardens, inspired by the luxurious Villa of Papyri at Herculaneum, covered by the eruption of Vesuvius in AD 79, were reason enough to visit. The central garden of Mediterranean plants and replicas of Greek and Roman statuary surrounds a 220-foot-long shimmering blue pool.
No small museum, the Getty Villa’s art collection consists of Greek, Roman and Etruscan pieces exhibited in 48,000 square feet of galleries. Built on a hillside, the views are beautiful. The property is handicapped accessible but has many sets of yet more stairways inside and out to explore. Entrance to the Getty museums is free. However, parking is $20/day.

Unlike the romantic Getty Villa, The Getty Center feels like an ultra-modern collection of buildings housing an art museum and educational and research facilities. A quick tram ride up the hill from the parking garage dropped us at the main grounds.
I loved the huge plazas with fountains, walkways, and stairs everywhere that give a feeling of vast, Romanesque spaciousness. Everything is composed of white travertine stone imported from a quarry in Tivoli, Italy. Over a million tons of it. Each block of stone is cut to matching sizes giving the entire compound a geometrically unified appearance.
At the south museum pavilion, I walked through a giant cactus garden framed by city views. At the always-changing central garden, rolling green lawns and a stream led to a waterfall which fed a floating azalea garden shaped like a labyrinth.
These spectacular gardens provided us with plenty of places to rest in between viewing the galleries of artwork starting with pre-1300’s European artworks, and early-to-present American art. The collection is enormous.
I felt sure I would be dining with celebrities at the Getty Center Restaurant — alas none I could recognize. But wraparound views of the Santa Monica mountains add to the simple but elegant ambiance and menu.

After so much art, the Petersen Automotive Museum on Wilshire Boulevard was altogether different.
Everything I could imagine, from antiques to concept cars, is there on four floors. The very first mass produced electric car, the 1996 General Motors EV1 with a range of 100 miles and top speed of 80 mph is there. An exhibit dedicated to the 90 Years of Pininfarina displays, a breathtaking collection of luxury car designs in mind-blowing colors.
Another exhibit features exotic hypercars with price tags over $1 million. A collection of movie cars including the 1989 Batmobile, the 1981 DeLorean DMC Time Machine from “Back to the Future”, and the “Ghostbusters” ambulance, plus planes, boats, motorcycles and even a submarine or two were on display.
My favorite was the Bond in Motion Exhibit running until October 30th. These are the original vehicles used in the 007 movies. Some are bashed and smashed. Monitors mounted behind the vehicles show clips from the scenes where the cars appeared in the movies.

Academy Museum of Motion Pictures
By now, it might sound like I’d had enough of museums. But who could resist seeing the actual ruby slippers worn by Judy Garland as Dorothy in “The Wizard of Oz”, or the extraterrestrial from the movie “Alien”, or C-3PO and R2-D2 from “Star Wars”, or study up close the uniform of Okoye from “Black Panther”? These are just the tip of the iceberg.
Millions of items are on display at the recently opened Academy Museum of Motion Pictures, just across the street from the Petersen Automotive Museum.

There are special exhibits such as tributes to Spike Lee and Judy Garland, darkened galleries to wander through and watch ongoing film clips, and getting up close and personal with the objects, creatures and costumes of movie lore.
A gallery honoring the animation filmmaker Hayao Miyazaki is an impressive collection of video, storyboards, and amazing artwork.

A room dedicated to the Oscars displays many of the glamorous-to-outlandish outfits worn by the honorees over the years. I stood a foot from Cher’s wild and iconic Bob Mackie-designed feather headdress and barely-there sequin “gown” worn for the 1986 Academy Awards ceremony. That is as close as I could ever hope to get to one of my all-time favorite performers.
Where did the weekend go? There was so much more to see. I had so much fun, I can’t wait to go back.