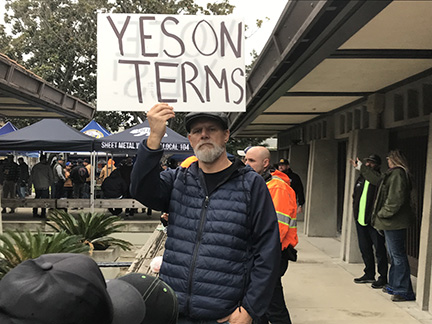 The much-anticipated vote on the Concord First Partners (CFP) proposed Term Sheet for the Base Reuse project planned for Saturday, January 7 ended in a 5-0 vote to continue the discussion at the next Special County Meeting on January 28.
Starting at 9 AM, the meeting went as far as hearing the Term Sheet presentation, answering questions by members of the council regarding the presentation, and then hours of public comments, appearing both in-person and via Zoom with each person given two minutes speak on the subject.

The Council Chamber and overflow room were at capacity, mostly filled with members of local trade unions who arrived early to guarantee a seat plus fill the Chamber with supporters of the proposed Term Sheet.

Various labor unions set up pop-up canopies outside the Chamber, some offering coffee and donuts to host the many supporters relegated to standing outside due to room capacity.

With the seats filled with Union members, most in-person comments came from them advocating for Council acceptance of the Term Sheet. Meanwhile, many who opposed were appearing via Zoom eight hours into the meeting.

Officers from the Concord Police Department were on hand to keep the peace of what had the potential to become quite the contentious meeting.

Most commenters, both for and against favored the project for its promise to deliver 40 years of jobs, new homes – especially affordable homes, and needed prosperity for the City of Concord in retail and community benefits.

The Term Sheet is a non-binding document that basically sets a vision of development and a plan for its financial feasibility. While some objected to the changes from the original RFP (request for proposal) such as building 3700 more homes, the majority to lobby for to Vote NO rest their complaint on the fact the Seeno Family’s Discovery Builders is one of the entities within the CFP consortium.
Save Mount Diablo recently sent 37,000 flyers to Concord residents concerned about the potential problems looming if Seeno is involved based on their history of convictions and litigations. A few opponents have also complained of intimidation and filed recent police reports claiming to have received personal threats for their opposition.
In addition, the East Bay Times published two Dan Borenstein editorials revealing a previously unknown legal dispute pitting Albert Seeno Jr. vs. Albert Seeno III over control of the company.
“Seeno Jr. says his son previously had taken hundreds of millions of dollars without permission from his father and his father’s companies, has debt of over $100 million, bullied his father to hire him as CEO under threat that he would otherwise never see his grandchildren, and has been abusive and misogynistic toward employees.”
Seeno III, 48, in his legal filings, denies that his father was bullied into signing the employment contract and disputes that Seeno Jr. was inadequately represented by an attorney. The son says claims that he is diverting money, mismanaging workers and construction jobs, concealing documents and otherwise breaching obligations to his father’s companies are untrue.”
According to Borenstein, case management conferences are scheduled for March in the litigation over control of Seeno Jr.’s companies and for Jan. 12 in Seeno III’s lawsuit accusing his father of trying to disrupt the operations of Discovery Builders.
Guy Bjerke, Director, Economic Development and Base Reuse, offered not to answer Council questions regarding litigation, dismissing it as a private matter.
Council was assured that the outcome would not impact their commitment to the project.
At the end of public comments, Council was then to discuss the issue amongst themselves, but after nine hours, Councilman Edi Birsan moved to continue that part of the meeting on the special meeting planned for Saturday, January 28. All five councilmembers happily approved that motion.

More on this story here. https://www.diablogazette.com/2023/01/marathon-base-reuse-ninehour-marathon-discussion/