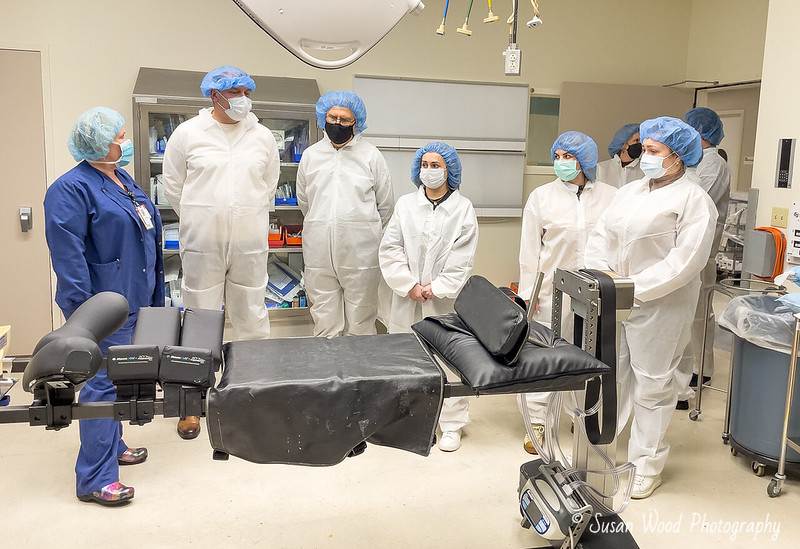 From November 4 – 11 the Rotary Club of Concord assisted by the Rotary Club of Pleasant Hill hosted a delegation of healthcare professionals from across Ukraine. As part of the Open World Program, funded by the Federal Government, four women and two men stayed with individual members and during the day visited medical centers in the Bay Area.
Seeking to learn more about emergency and trauma services, they received presentations from heads of departments and made site visits to UCSF San Francisco, San Francisco General Hospital, San Ramon Medical Center, UC Davis Medical Center, John Muir Concord campus and Stanford University Medical Center. The team made many new friends and were given promises of future collaboration from their US peers.
There was also an extraordinary opportunity for a group of high school seniors from Mt Diablo HS who are on a special track showing them careers and options in the medical field; they got to meet the delegation and ask questions.
For those of us working with the team daily, it was a sobering, informative and very humbling experience as each one repeatedly shared their stories describing their working situations and how each had been forced to adapt to wartime conditions. It brought the whole tragedy of Ukraine forcibly home. I was particularly struck by the simple straightforward manner in which each person spoke without drama or fanfare.
Anastasia, an oncology specialist, was forced to send her eight-year-old daughter into Poland with her grandmother, at the beginning of the war just so she would be safe. Volodymyr’s 750 bed hospital in Kyiv uses an emergency generator for electricity. In addition to constant air raids and drone attacks, and having to rush to a bomb shelter, his main problem is lack of gas for the generator. Never sure of a delivery, he has to shut it down for four or five hours each day.
Natasha is the director of a one-thousand bed hospital close to the front lines in the eastern region and receives about three hundred military casualties a day. Every week she sends away three train loads of stabilized patients to safer areas while three more trains bring in new ones. During the first two months of the war, she and all her staff lived in the hospital, they did not go home.
The country was not prepared for war and had to improvise and move quickly to adapt. In a matter of months, Natalia’s hospital moved all essential medical services into newly constructed bunkers below ground, and in Kyiv, similar bunkers were constructed. Three of the team members were hospital directors and each one held the military rank of major. They told us that they have special permission from the Ministry of Health to leave the country and that at any given moment they could be called upon for active duty.
In addition, they offered their showroom as a venue for an evening when Ukrainians got to share their stories with Rotarians from Contra Costa. With both the women and men wearing traditional national dress, they held the packed audience spellbound as each one personalized what it was like to live in a war zone.
But not all was work. The Concord Rotarians gave the team a tour of San Francisco in a Cadillac Escalade provided by Lehmers. They visited the State Capitol and were also treated to a private tour of the USS Hornet in Alameda. One request they all made was to have some time for shopping, especially at the Apple store.
As a footnote, since their return, I have just received an email from Oksana, the team leader who lives in Kyiv on the 12th floor in a high-rise apartment building with her husband and three-year-old son. Due to a drone strike she no longer has water or electricity.
Once there is peace in Ukraine, local Rotarians will visit with some of these team members and assess how they will be able to offer helps and assistance.

Michael Barrington is a local author, www.mbwriter.net. His upcoming novel ‘The Baron of Bengal Street’ will be published in January 2023.
Photos by Susan Wood, Susan Wood Photography, susan@susanwoodphotography.com