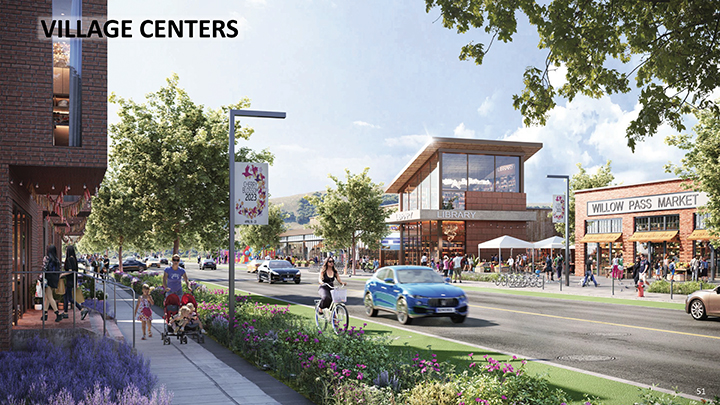 The delayed and long awaited Term Sheet the City of Concord has required of its chosen master developer, Concord First Partners (CFP), for the development of the Concord Naval Weapons Station is being presented to the community and will be voted on by the City Council at a special council meeting on Saturday, January 7, 2023.
This is the biggest land development in the Bay Area – a roughly $6 billion dollar project. The term sheet is a conceptual estimate of residential and commercial densities as well as a conceptual and reasonable assumption of financial feasibility. It is a vision and a development road map so that the US Navy will transfer the 2300 acres of land to the City after the Navy’s clean-up of the area.
The term sheet was originally due in May of 2022. CFP was granted two extensions to complete the term sheet and at one point in August had threatened to pull out claiming it was not an economically viable project for them.
However, at the December 1 meeting at the Concord Senior Center, Concord First Partners presented some surprises beyond the original expectations including a plan to build 15,595 homes, 3,300 more homes than the original plan.
City staff has recommended approving the non-binding document and its conditions for a future sale and development agreement. Here are some of its highlights.
This plan calls for a five-phase development, to be completed over 40 years, which would build 15,595 homes, create an estimated 16, 920 jobs, and 6 million square feet of commercial space while restoring Mount Diablo Creek.
Concord First has partnered with Related California to build affordable housing. They have agreed to use union labor to build 3,020 affordable homes for low-income households defined as those earning 80 percent of area median income or below.
CFP will provide Affordable Housing “Development Ready” pads which they contend equates to a contribution of $187 million in infrastructure. The plan has included 879 Junior Accessory Dwelling Units (JADU). These are attached mini homes that the property owner would lease at the affordable housing rate.
Also, it has pledged $50 million to affordable housing projects in Concord, $100 million toward a Tournament Sports Park/Citywide park and $65 million toward a Community Center/Library.
The first phase will consist of 2,873 new homes, of which 693 would be affordable, on 423 acres. It would also feature 80 acres of parks and greenways. This is part of the first 1400 acres the Navy is expected to be approved by the US Navy for transfer to the city by next year. The developer will be expected to reach certain milestones to continue on the remainder of the land to be transferred.
The plan states that at least 50% of market-rate residential is to be sold to unaffiliated third parties but prioritized to local builders.
The development partnership seeks an 18-percent return on its investment, according to the term sheet, slightly lower than the previous master developer threshold of 20 percent.

The selection of Concord First Partners as Master Developer was controversial. Discovery Builders, has a 45% stake in the consortium and is owned by the Seeno family, who has a history of environmental and other legal violations.
The deliverable of local union jobs, residential and commercial development, affordable housing and community benefits were required no matter which developer was chosen.
On paper, their Term Sheet presents an exciting vision complete with renderings and photos of the proposed development.

While most of us will not be around at its projected 40-year completion, your understanding of the project, including its risks and benefits is important. Your input is necessary to properly guide the city council on how to move forward. There are many details still to be defined and questions to be answered, some of which can only be resolved as the development proceeds.
The December 1 presentation was only lightly attended but it can be watched online at concordreuseproject.org.

The next presentation is on December 15, at 6:00 p.m. at the Concord Senior Center, 2727 Parkside Circle.
Will council give CFP the nod to move forward?