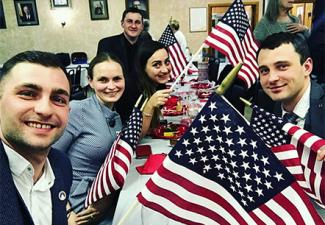 Six years ago, Dr. Michael Barrington brought to the Rotary Club of Concord the idea of being part of the Open World Program. The program is operated and implemented by the Federal Government and several non-profit organizations (NGOs), the largest being Rotary International.
Open World is a ten-day program which brings emerging leaders from Eurasia to the United States to engage with professional counterparts. The program was established in 1999 to foster cultural and political ties with Russia but has since expanded to other countries of the post-Soviet region. Since its inception the program has brought over 24,000 delegates to 2,300 communities throughout all 50 states.
As such, on November 4-12, a delegation of six Ukrainian professionals accompanied by a bicultural/lingual facilitator and an interpreter will come to Concord after receiving a one-day orientation in Washington D.C.  Hosted by the Rotary Club of Concord, they will home-stay with local Rotarian families and participate in an intensive eight-day program of meetings, interviews, presentations, and panel discussions with experts in their fields. A professional interpreter is also provided.
The focus of this delegation is “Healthcare Administration,” and the delegation is composed of doctors, all hospital administrators. Among the local facilities they will be visiting will be the campuses of the John Muir Health Care System both in Walnut Creek and Concord.
Delegates will collaborate on best practices for Health Care Administration with visits to Davis Medical Center, John Muir Medical Center, San Ramon Medical Center, Stanford Medical Center, and UCSF/San Francisco General. They will also visit Sacramento where they will tour the State Capital and meet with local Assembly Members.
In the past the club has hosted groups from Uzbekistan, two from Tajikistan and this will be the second one from the Ukraine.
The Open World Program is the only exchange program within the US legislative branch and receives annual funding from US Congress. Open World provides programming in areas such as Rule of Law, Accountable Governance and Social Services.
Rotary is a global network of 1.4 million neighbors, friends, leaders, and problem-solvers who see a world where people unite and take action to create lasting change – across the globe, in us communities, and in ourselves. Rotary members believe that we have a shared responsibility to take action on our world’s most persistent issues.
They provide service to others, promote integrity, and advance world understanding, goodwill, and peace through our fellowship of business, professional, and community leaders.
The Congressional Office for International Leadership (COIL, formerly known as the Open World Leadership Center) maintains a vast network of more than 30,000 alumni in strategic countries including Russia, Ukraine, and others in the Balkans, Caucasus, Central Asia and Eastern Europe.
Program participants are provided with exposure to the work of Congress, American politics, accountable governance, and volunteerism while being home hosted by American families. To learn more about the Open World program, please visit www.openworld.gov/