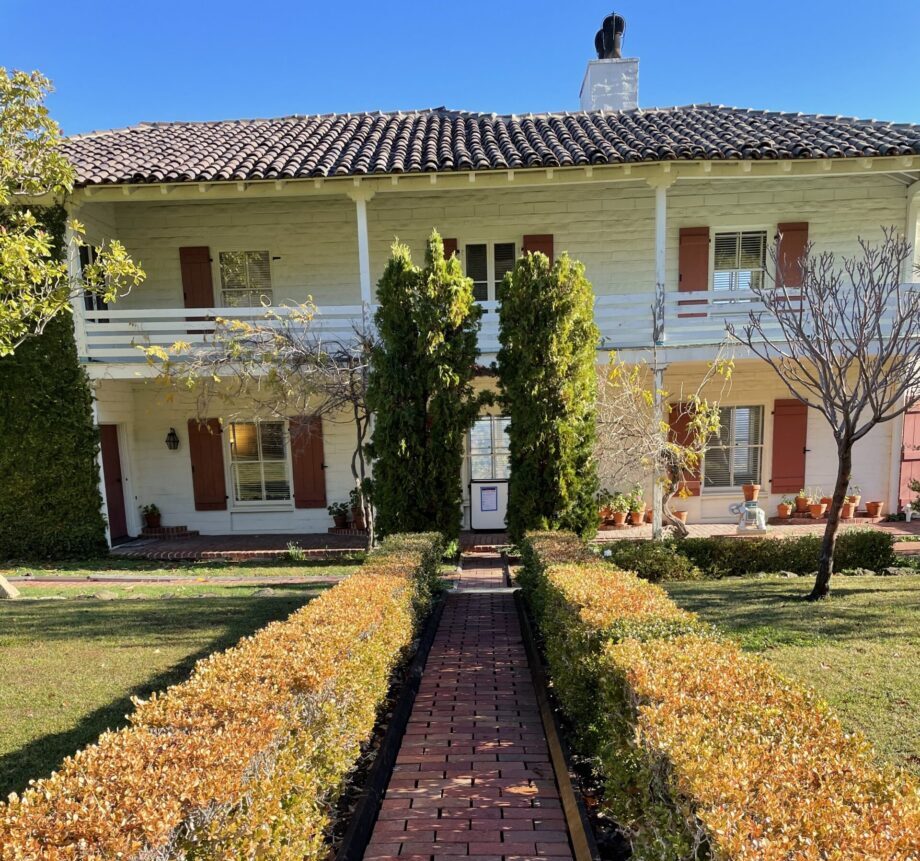 Back in the early 20th Century, playwright Eugene O’Neill’s name was as recognizable to the public as film director Stephen Spielberg’s is today. O’Neill’s genius in bringing realism into the theater was unparalleled in the 1930s and well after his death in 1953. Over the course of his lifetime, he was honored with four Pulitzer Prizes, an accomplishment he shares with only a few fellow authors, including poet Robert Frost. Eugene O’Neill is also the only U.S. playwright ever to win the Nobel Prize for Literature, the highest international award.
Between 1937 to 1944, O’Neill lived and wrote in a secluded home in the bucolic hills of Danville with his third wife, the former actress Carlotta (Monterey) O’Neill. While living in Danville’s Tao (pronounced “dow”) House, O’Neill produced three works that are considered his greatest achievements, including O’Neill’s autobiographical and most well-known play, “Long Day’s Journey into Night”. Carlotta and Eugene did not have children together, but both had children from earlier marriages. One of Eugene’s daughters (Oona O’Neill) married Charlie Chaplin.
The house and a portion of the property that O’Neill purchased with his Noble Prize money has been designated as a National Historic Site which is open to the public for free tours. Access to the property is provided by the National Park Service (NPS) which operates a shuttle through a narrow, gated road to the two-story, three-bedroom house and the grounds.
NPS tour guides provide a general overview of O’Neill’s life and the property, and provide brochures for the self-guided tour of the house. A small gift shop is operated at the rear of the house. Private vehicles are not permitted to drive to the property, but the effort to make a reservation on the shuttle is well worth the effort.
It is fortunate that this historically significant Bay Area treasure still exists. Without the hard work of dedicated volunteers, political leaders, and East Bay Regional Park staff who banded together to prevent the house and a portion of the O’Neill property from being bulldozed for development, including the house, old barn and their beloved Dalmatian’s gravesite would not have been preserved.
In 1974, a group of O’Neill supporters organized the nonprofit Eugene O’Neill Foundation. Its purpose was to buy the Tao House and historic grounds and use the site as a center for performing arts and study.
Shortly after the property was purchased, actress Katharine Hepburn, initiated the idea of opening the Eugene O’Neill National Historic Site to artists after the late Travis Bogard, professor emeritus of Dramatic Arts at UC Berkeley and The Eugene O’Neill Foundation’s first artistic director, invited Katharine Hepburn to visit the newly acquired Eugene O’Neill property.
In 1962, Hepburn had played the part of Mary Tyrone in Eugene O’Neill’s autobiographical play, “Long Day’s Journey into Night” and had become an honorary Board Member to the Foundation.
“After the Foundation acquired Tao House,” said Linda Best, a Eugene O’Neill Foundation Board Member, “Travis Bogard asked Katharine what the Foundation should do with the site. Hepburn said that you should open the place to artists so they can experience the ambience that inspired Eugene O’Neill.”

However, people don’t have to be artists to appreciate the serenity of the site. The architecture and furnishings of the house and grounds was inspired by Daoism, a philosophical and religious belief that emphasizes existing in harmony with nature. If tourists take a moment to observe their surroundings, they might hear the lowing of cattle, raucous calls of acorn woodpeckers, or the shriek of a red-tailed hawk.
In the courtyard, evidence of the O’Neill’s love of gardening remains. Many of the types of plants that they would have nurtured are on display.

The entrance door to the house is red, a color Daoism believes helps ward off evil spirits. It’s clear O’Neill found inspiration from his Danville home when writing his play, “More Stately Mansions”, when he describes a garden courtyard and red door similar to those found at Tao House.
The Asian influence seeps into the interior design of the house with guardian lions, or foo dogs, decorating the base of the staircase. These mythical creatures represent prosperity, success, and guardianship.

To the right is a living room and a music room sits at the base of the stairs. Upstairs, Carlotta and Eugene had separate bedrooms. As you walk through their sleeping areas, the low rumble of O’Neill’s voice draws you to his study. Here, his staticky voice reads a portion of his play, “A Long Day’s Journey Into Night.” The two desks created an environment where he could work on multiple projects simultaneously.
A brick red colors the ceiling of O’Neill’s study. His love of the sea is evident in this room where several model ships are on display, as well as the color scheme in his bedroom of blue and white. He referred to the house as his “safe harbor.” Examples of his handwriting show how debilitating his cerebellar atrophy condition was to his writing. It was Carlotta who would transcribe his work into a readable form. To imagine his struggles to produce his plays is to experience the courage of the human spirit.
It seems appropriate that a time capsule has been placed on the property. While touring the main Tao House, it seemed like time had frozen and I could envision the life that Carlotta and Eugene shared. Visitors can find the capsule marker near the picnic area outside the gift shop where the tour concludes. When the time capsule is opened over sixty years from now in 2088, onlookers will be treated to newspaper clippings, play programs, and assorted photographs.
I was deeply humbled when I was accepted into Travis Bogard Fellowship Program at the Tao House earlier this year.

The Day Use program allowed me to have exclusive use of the Trunk House (named as such because it housed Carlotta’s Louis Vuitton luggage) in the courtyard of Tao House.
Besides taking the public tour, I spent two weeks immersed in writing on the property where I experienced firsthand how magic happens when an artist is offered a quiet environment, free from the distractions of everyday life.
On the last day of my fellowship, it was bittersweet walking along the narrow path bookended with concrete engraved with the names of his famous plays, past the whitewashed old barn where, even today, performances of his life’s work are brought to life, past the brick bench under an old oak tree where Eugene would sometimes sit, past the sign marking the location where his pet chickens lived—many named after prize fighters— until I reached the edge of the parking lot.

I lingered at the sign spelling out their beloved Dalmatian’s Last Will and Testament. Taking one last look at the dog’s gravesite before I hefted my backpack higher on my shoulder. Filled with two weeks of productive writing, the bag seemed somehow heavier. I think Eugene and Carlotta O’Neill would be pleased that their home continues to provide a safe harbor for visitors, and an inspiring place for artists to pursue their craft.
Free tours of Eugene O’Neill’s Tao House are offered Wednesday to Friday and Sunday at 10 AM and 2 PM with advanced reservations, except on major holidays. Call 925-228-8860 ext 6422. Self-guided tours are offered on Saturdays without reservations with shuttle pickups at 10:15 AM, 12:15 PM or 2:15 PM. Allow 2 1/2 hours for the visit.

Jill Hedgecock is an award-winning and internationally published author. Her books include “Rhino in the Room,” “Between Shadow’s Eyes” and “From Shadow’s Perspective.”