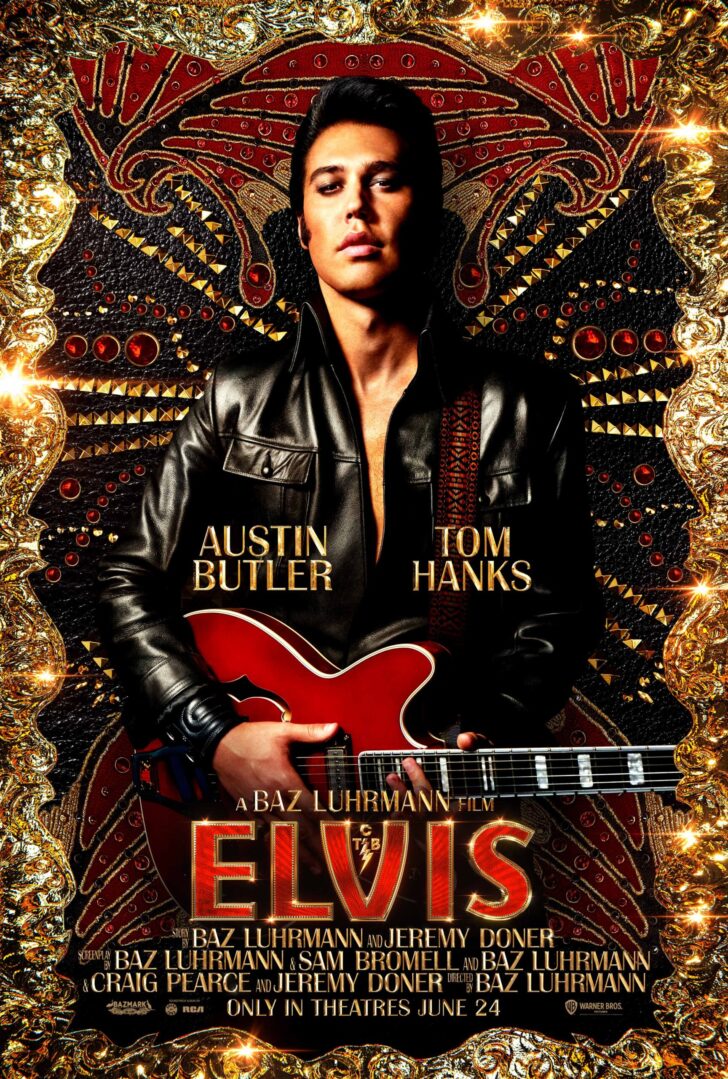 Watching a Baz Luhrmann movie is like going to the circus. Bright lights, color overload and the frenetic pace are to be expected at both venues. So, it’s befitting that Luhrmann decides to center his new film, “Elvis” around a circus theme.
The film opens with an introduction to Colonel Tom Parker, Elvis’ longtime controversial manager. He is our ringleader as we walk through the stages of Elvis’ life that lead him to become The King. The Colonel, who starts his career in the circus and finds he has a knack for promoting spectacles, longs for the ultimate act that he can package and sell and he finds it in the young, hip grinding, rollicking Elvis.
Tom Hanks takes on the role of Tom Parker. Behind pounds of prosthetics and makeup, you would think he would be unrecognizable, but he still looks like Tom Hanks, which can be a bit jarring at times. He plays the role over the top and it is the right call. The film unfolds more like a Grimm’s fairy tale than a biopic, so as Hanks’ elderly Parker narrates and frolics around spinning his tale and oxygen tank, it somehow seems to fit.
The main attraction is, of course, Austin Butler as Elvis. Filling Elvis’ blue suede shoes is a tall order, but Butler meets the challenge and will hopefully be remembered during awards season. He studied Elvis for two years and his hard work shows. Butler does more than move and sound like Elvis; he gives Elvis an emotional core that allows the viewer to connect on a human level with an icon. While the film blinks and spins and shines all around us, Butler brings Elvis down to earth and we get a glimpse of his ambitions and struggles.
This film blends not only Butler’s and Elvis’ singing voices, but it also stirs fact and fiction. This is not the film to give you a factual account of Elvis’ life. Instead, this film does its best to capture what it felt like to be in his presence and in this way, the film scores. The concert scenes are transportive. You literally feel like you are seeing a young Elvis in the flesh and it is easy to forget you are in a movie theater.
The relationship between Elvis and Colonel Tom Packer is the main focus, while wife Priscilla and his parents have only minor roles. The film also depicts the changing times in America and how this also affected Elvis as he matured.
Some may not like the flashy style of this film, but as someone who would not call themselves an Elvis or Baz Luhrmann fan, I thoroughly enjoyed this movie. It wasn’t originally on my summer movie list, but I’m glad I saw it. I think you will too.
Rated PG-13