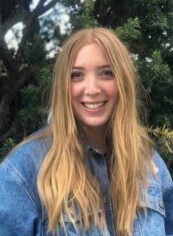 Clayton Valley High School graduate, Class of 2015, Sarah Williams, was recently nominated for an Emmy in the category of “Outstanding Casting for a Daytime Animated Program” for Nickelodeon’s “Baby Shark’s Big Show!”
Williams began at Nickelodeon Animation Studio in Burbank, Calif., as an intern in 2018 while studying at UCLA.
In 2019 she graduated with a Communications degree with a film and media minor. She is now an animation casting associate for Baby Shark’s Big Show! which features a sensational lineup of voice actors: Kimiko Glenn (Orange is the New Black), as Baby Shark; Luke Youngblood (Harry Potter and the Sorcerer’s Stone), as William; Natasha Rothwell (Insecure), as Mommy Shark; Eric Edelstein (We Bare Bears), as Daddy Shark; Debra Wilson (MADtv), as Grandma Shark; and Patrick Warburton (Seinfeld), as Grandpa Shark.
Baby Shark’s Big Show! currently ranks as the number-two show with Kids 2-5 for 2Q 21 across all TV, only behind PAW Patrol and has been renewed for a second season. The series production is overseen by Eryk Casemiro, Senior Vice President, Nickelodeon Preschool.
Willams and her casting associates will be up against “Baba Yaga”, “Bubble Guppies”, “Duck Tales”, and “Elena of Avalor”.
The 73rd Emmy Awards will air on Sunday, September 19 on CBS, hosted by Cedric the Entertainer.
We wish her the best of luck. What a fantastic way to start a career!