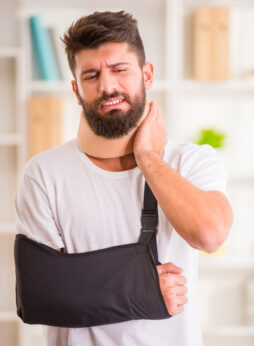 Adam Awkward stumbled into the lawyer’s office with a neck collar and a sling (Well he showed up on a Zoom call that way).
“What happened to you?” the lawyer inquired sympathetically, while thinking to himself, “This could be some serious money!” [Hey, even lawyers are allowed to tell lawyer jokes.]
Mr. Awkward explained: “I was walking on the sidewalk on Mangled Street in Concord (street name made up to protect the innocent) and I went flying. I was lucky enough to get my hands extended or this pretty face might have got messed up.”
“Well, let me ask you some questions, if that is all right,” the wise lawyer said. [Yes, another lawyer joke. I am no wiser than you, my kind reader.]
“Can you describe what caused you to fall?” The lawyer asked.
“Well, I didn’t really look around and examine everything. Geez! I was hurting bad, man, but the sidewalk was like, uneven.”
Stroking his chin, the sagacious lawyer dug deeper into the tale (if only he had a pipe to smoke to complete the image, but there was no smoking permitted in the building). “Okay, can you describe how uneven? Did anyone take any photos?”
“Really, dude, I was in pain, serious pain. I wasn’t thinking of measuring the sidewalk or snappin’ a picture,” Mr. Awkward moaned.
“No problem,” the lawyer countered, “I can go out and take some photos later. What time of day did this happen?”
“It was around noon.” Mr. Awkward answered.
“What was the weather like?”
“It was sunny, dry.” Mr. Awkward responded, wondering a bit where this was heading.
“Was there anything blocking your view of the uneven part of the sidewalk?”
“Hey, wait, man, whose side are you on? I wasn’t staring at the ground while I walked!” Mr. Awkward exclaimed.

“I’m on your side,” the lawyer assured him in a soothing voice. “I handle these cases on a contingency fee, so the more money you get the more money I make. So, yes, my goal is to get you the most money I can, but I need to know as many details as possible. I have handled literally hundreds of trip/fall sidewalk cases over my 38 years of practice, and each is unique.”
“Okay, sorry,” said Mr. Awkward, “but what do you think of my case?”
The lawyer leaned forward, and Mr. Awkward listened.
“First of all, the fact that you fell on an uneven sidewalk does not necessarily mean that someone else is legally responsible for your fall. For someone else to be liable for your injuries, we have the burden to prove two things: one, that the sidewalk was dangerous, and two, that the owner of the sidewalk knew, or at least, should have known, of the danger.”
The lawyer continued: “So when is an uneven sidewalk dangerous? The courts have ruled that the difference in elevation must be at least one inch for a sidewalk to be considered dangerous. This means we must get out there with a camera and a ruler and take some photos to measure the difference in elevation.”
“The second part of what we must prove is called ‘notice.’ We must prove either that the owner of the sidewalk had actual notice of the danger, or that the owner had what is called ‘constructive’ notice of the danger which means that the owner should have known about the danger. Sometimes I have been able to prove actual notice, like in cases against a city where there is proof that someone complained to the city about the sidewalk before my client fell, but actual notice is rare.
“Usually we have to prove “constructive” notice which typically means showing that the danger was there long enough that the owner should have known about it. In many cases, an uneven sidewalk is caused by tree roots. This condition takes a long time to develop, so we argue that the owner of the sidewalk had plenty of time to observe the condition worsen over time. If the owner of the sidewalk is a private person, it is easier to prove constructive notice because that person is probably around the property often. When the owner is a City though, it is harder to prove constructive notice. If there is no proof that anyone ever complained to the City about the sidewalk, we try to find out if the City had performed work on the sidewalk, or in the area, like on the street, to show that a city employee should have observed the dangerous sidewalk.”
The lawyer explained further: “Often, in trip/fall cases we bring a claim against the City and against the private property owner where the sidewalk was located. Many cities, including Concord, have ordinances that make private homeowners responsible for defects in city sidewalks that pass through the homeowner’s property. (See, for example, Concord Ordinances Chapter 25, particularly sections 12.25.030 and 12.25.040. Concord also has a Sidewalk Repair Program: homeowners should call Public Works at (925) 6713448 or send an email to publicworks.sidewalk@cityofconcord.org to get more information).
Under these ordinances, homeowners are responsible for repairing and maintaining the city sidewalks. I am handling a case against the City and County of San Francisco now and the San Francisco ordinance does not make homeowner’s responsible for defects caused by city tree roots.”
“Finally,” the lawyer explains, “in trip/fall cases there is almost always an argument that the person who fell is responsible, or at least partially responsible, for falling. Persons walking on a sidewalk have a duty to exercise reasonable care. This means that the more open and obvious the danger the more likely it is that the person who fell was at least partially responsible.
For example, if a person walks into a huge deep hole in a sidewalk in broad daylight, the owner of the sidewalk will of course argue: why didn’t you see the hole? But, if it was dark and rainy, and the defect in the sidewalk was only a two-inch difference in elevation, it is much harder to blame the person who fell. If the person who fell was also responsible for the fall, then 100% of the fault must be divided up between the sidewalk owner and the person who fell. For example, if the person who fell is found to be 25% at fault then that person is entitled to collect only 75% of his damages from the sidewalk owner.”
“Anyways,” the lawyer states,” let me go out to the sidewalk with my camera and ruler and let’s see if you have a case!”