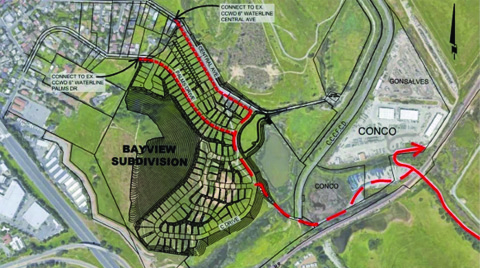 The Contra Costa Board of Supervisors unanimously denied an appeal of the county planning commission’s approval of a 144-unit residential subdivision, on 78.2 acres just outside Martinez, east of Interstate Highway 680 in the Vine Hill area.
Seeno/Discovery Homes’ Bayview Estates Residential Project will have detached single-family homes and associated roads on 31.8 acres of the site. It will also include approximately 42 acres of open space, marshes, and undeveloped land, including 20.1 acres of the upper hill area. There will also be a 4.5-acre private neighborhood park.
Central Avenue will be the subdivision’s main access road, though the neighborhood will also be accessible via Palms Drive.
Residents of private Palms Drive spoke against the project, saying the lack of roads in and out of the project will make it problematic in the case of a fire, and the builder should not be allowed to cut down 30 protected trees. Discovery obtained tree removal permits and will replant 30 trees.
It has been turbulent waters for certain Seeno’s planned developments in Contra Costa County.
On February 10, 2022, the Contra Costa Superior Court sided with Save Mount Diablo and ruled that Seeno/Discovery Builders’ proposal to build 1,650 houses in the hills between Concord and Pittsburg had an inadequate environmental impact report (EIR).
As a result, the project’s approvals are null and void. Attorneys for Seeno asked for a new trial, asking the court to reconsider its earlier finding.
The Pittsburg City Council had unanimously voted to approve the proposal in February 2021. They ignored hundreds of letters and public comments that opposed the project. Save Mount Diablo filed a lawsuit challenging the project’s approval in March 2021.
On April 4, the court reaffirmed its earlier stance that the EIR violated the law, because it failed to analyze the project’s impacts on air quality, water supply, traffic, and sensitive plant species. The ruling upholds Save Mount Diablo’s victory in its decades-long battle against this sprawl development.
Louis Parsons, president of Discovery Builders, Inc. responded with this statement: “We are very pleased and encouraged that this ruling supported the vast majority of the work and analysis included in the City’s Environmental Impact Report. City staff and the environmental consultants did an incredible job analyzing this project. The Pittsburg City Council, local residents, businesses, and labor organizations have repeatedly expressed their support for these homes and this project in the past—and we will do everything in our power to deliver on our promise to develop this project.”