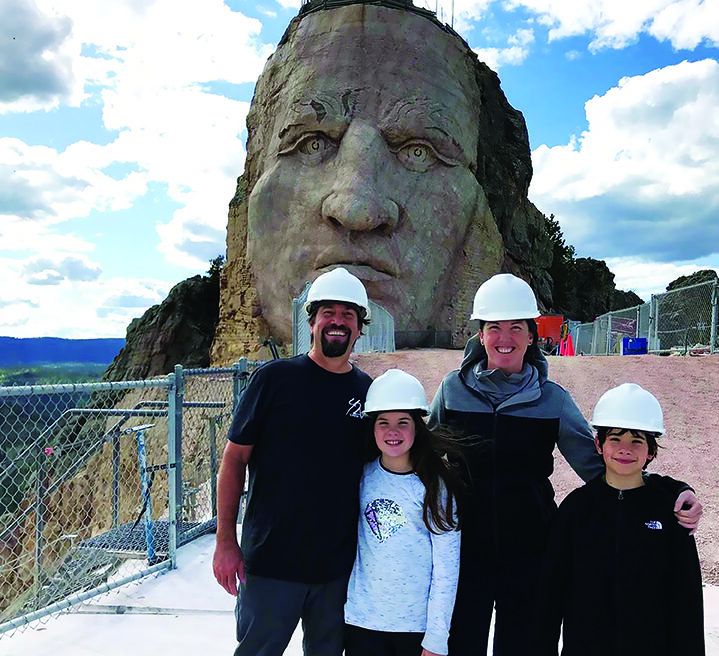 Meet the Fossans, Michael, wife Kris, Tristan (19), and the twins Aidan and Zoe (12). Last year, Clayton was their home. Now it’s the entire United States. A year ago, they bought an RV and have been on the road since October 2019 not knowing what to expect. Their travel plans were vague.
They are now known as the Wandering Fossans and their travels can be followed with plenty of photos on Facebook and Instagram.

The Fossans still own a small 1000 sq. ft home in Clayton which they now rent out. Michael is a retired phlebotomist, Kris is an RN (both worked at John Muir Health Concord campus), and the twins are home-schooled.
Michael said they were basically tired of living in a Bay Area bubble. He has lived in the Bay area for 50 years but has never visited Alcatraz, nor even Yosemite until he met his wife. Together they never took traveling vacations, relying mostly on occasional date nights in San Francisco.
Last October, after making a hard judgement of their life, they decided it was financially more responsible to leave California than it was to stay. They decided to leave, pull the kids out of schools and embark upon exploring the country in their RV.
They unloaded their belongings through garage sales, donations amd by tossing them. Once they moved into their RV, they realized all those belongings were just stuff.
Aidan had been struggling in public schools. He was using ADHD medications but wasn’t socializing well while Tristan was an overachiever. Now, Aidan is not on medication and they easily make friends everywhere they go.

“Since last October, Aidan and Zoe have been home-schooled. They have visited 21 states and have learned things they don’t teach in school,” Michael said. “For example, the Texas flag is held in equal regard to the United States flag.Texas was already a Republic when it joined our nation. It’s the only state that can do that. Texans are unbelievably proud people, and we now understand the ideology behind that.”
Their traveling plans are flexible. Destinations are influenced by Covid, job prospects and weather. They look for where weather is nice, chasing 70 degrees across the country.
Traveling nurses are in high demand making it easy for Kris to find her next contract which are typically 13 weeks. The kids do their home- schooling with Michael on the three longs days a week Kris works, (generally five days of work crammed into three days.) The remaining 4 days of the week, the family plays hard and they explore.
When Kris is under contract they park in long-term parking. But between jobs, they travel. There are many sites for boondocking (camping off the grid), for traveling, for RV’ing. National Park Service lets you park for free.
“We find out about things by talking to other RV’ers. It’s been amazing. The kids get to play at all the beautiful National Parks. At one time we parked at the edge of the Badlands 20 feet from a 200-foot drop. Kids would stare at the cliffs in awe or go climbing.

Of the 21 states they have traveled, Idaho has been their favorite so far. It’s been easy for them to make friends. Both are active in the scouts which is fully virtual due to Covid. While in Idaho, Zoe earned a merit badge for theatre by producing a play, soup-to-nuts with her new friends there.

In Wyoming, they spent time on a farm. Everyone truly loved this Harvest Host experience from feeding the horses (right outside our door) to cuddling the kitties and chicks, to the informative farm tour. In the process, we all learned the history of an original homestead.

”We joined A Year to Volunteer for another amazing project in Indiana.”
Kris and the twins helped complete the painting of the service building, while Michael and Tristan helped construct an observation platform. ”It was great time spent with a fabulous group of people doing great things for others,” Michael says.

In May, they traveled 37oo miles from Montana through Indiana down to Alabama and west to New Mexico.
One adventure, which Michael calls epic, was a private tour by a knowledgeable guide to the top of Crazy Horse’s arm. (Cover photo).

Currently they are near Ft. Lauderdale.where they experienced Tropical Storm Eta.
“Floridians treat such storms the way Californians treat earthquakes,” Michael mentioned. ”Our friends were asking if we were okay, meanwhile, Kris is paddle boarding down the flooded streets.”

At one time, they had a plan to return, especially if it wasn’t working for the kids. It’s been very easy, simple and fun. The kids are fully enjoying it and are testing above grade level. We’re still Californians and we check into Claycord all the time. But for now, they don’t know when it will end. “It’s our way of life.” Michael stated.