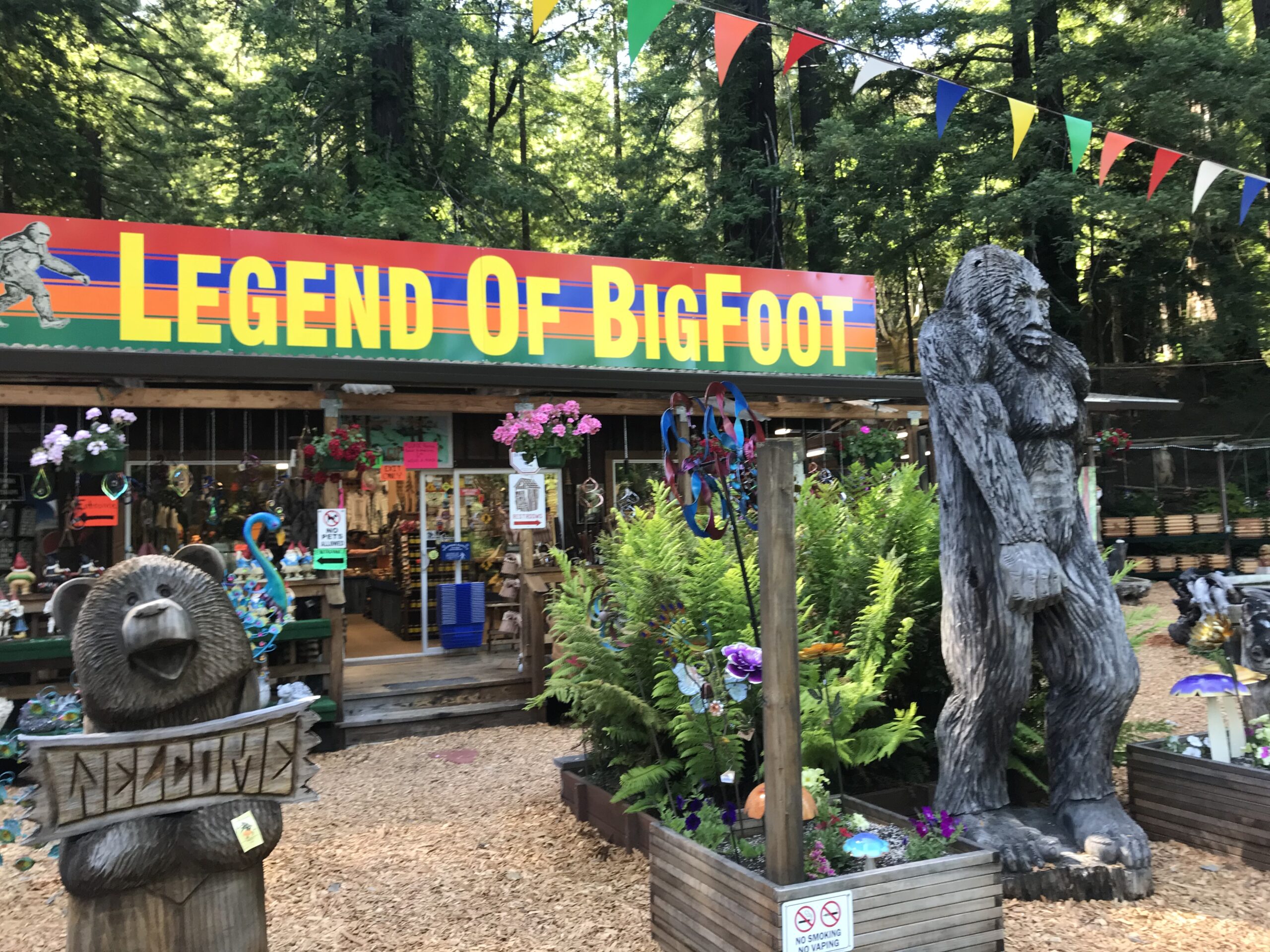 By Jill Hedgecock, Photos by Diane Walsh – They call themselves Squatchers and they come in droves to Northern California hoping to glimpse the legendary Bigfoot. And on a weekend getaway, Diane and I embarked on the same quest, she the photographer, and I the scientist.

California has the second most reported Bigfoot encounters in the U.S., beat only by Washington. The first known West Coast sighting occurred at Mount St. Helena in the 1850s, though it was the Patterson/Gimlin film in the late 1960s that made the tall, ape-like beast famous.
But the modern-day drama began nearly a decade before the epic 1967 film clip. In 1958, a trail of very large footprints at a logging camp in Bluff Creek launched the Bigfoot craze. The large, muddy impressions of oversized feet were later revealed to be a prank by descendants of logger Ray L. Wallace in 2002, when the man’s family admitted the hoax to a Seattle Times reporter. They confessed that Ray used a 16-inch carving of a human foot a friend had made from wood to leave tracks around logging gear to trick a fellow worker.
Despite several hoaxes, the debate about the existence of Bigfoot rages on even today. The FBI file on Bigfoot was declassified on June 5, 2019. The FBI’s interest began when Director Peter Byrne of the Bigfoot Information Center and Exhibition sent in about 15 hairs attached to a skin fragment. The FBI usually only examines physical evidence related to criminal investigations but made an exception in the interest of research and scientific inquiry. The specimen was found to be deer.

The biggest Bigfoot controversy centers around whether Patty, the female captured on film by Patterson/Gimlin, is a hoax. It is this 59 seconds of footage that prevents the creature from disappearing into the forest and out of people’s minds.

My curiosity led me to meticulously research the Patterson/Gimlin film as part of a short story I published on Kindle last month (The Red Book: The Final Word on Sasquatch). During my investigation I discovered many lines of evidence that swayed me.
First, Patterson was a man of questionable character. Next, there appears to be rectangular eye holes on the freeze-frame image, and the placement of the breasts appears unusually low and look fake to my scientifically trained mind. But the most compelling evidence that the creature was contrived is the fur on the breasts. No living apes have fur around their mammary glands. Hairless nipples are an evolutionary adaptation to facilitate feeding. After putting my bachelor’s degree in the biological sciences to work, my conclusion that Bigfoot is a man in a costume is based on logic rather than emotion.
Despite my belief that the film is a hoax, I found myself clinging to the hope that Bigfoot exists, so I traveled five hours north from the Bay Area to Willow Creek, California, a small town in Humboldt County that calls itself the “Bigfoot Capital of the World”, to investigate.
Because The Legend of Bigfoot gift shop in Garberville lies along the route, I had to stop. Among wooden birdhouses and garden gnomes, there are plenty of Bigfoot souvenirs. From yellow placards proclaiming Bigfoot is the world’s reigning social distancing champion to mugs and T-shirts brandishing the hairy beast’s image. Besides a carved statue of a Bigfoot, a tall A-frame wooden house called “Bear Hollow”, and a koi fountain offer fun photo ops to capture memories of the visit.

Upon entering Willow Creek, the China Flat Museum with its giant Bigfoot statue is a must stop for any Bigfoot aficionado. Though still closed to the public due to the pandemic, docent Terri Castner, a long-term Board Member, arranged for a COVID-friendly private tour.
Founded in 1988, the volunteer-run museum houses a collection of Sasquatch footprint casts, Bigfoot-related newspaper articles, and much more. This small museum also owns an original copy of the Patterson/Gimlin film (it is housed in the local bank vault). They obtained this critical Bigfoot history from Eric Beckford who helped Mrs. Patterson copyright the Patterson/Gimlin film.
Beyond the coveted film clip, the museum is a historical homage to this bipedal hominid.

Castner confesses that when she started volunteering at the museum, which includes historical artifacts beyond Bigfoot paraphernalia, she doubted the existence of Bigfoot. Her experience in Bluff Creek changed her mind.
She and her husband were bringing supplies to a friend and she asked if his pond was suitable for ice skating. The friend invited her and husband to go look. They spotted huge footprints that showed icy bottoms as though they were made by a warm-blooded animal. They followed the prints for about an hour until they reached a bluff that made it impossible to keep going. Now, she’s a true believer.
It is hard to discount the volume of personal encounters. Humboldt County alone has 124 documented sightings, while Del Norte County has 58, Trinity County 62, and Siskyou 47, As recently as June 1987, a sighting was reported 7 miles north of Willow Creek. There’s even a mention in the Antioch Ledger of an 1870 sighting of a “Wildman” approximately 50 miles southeast from Oakland. And then there is the image of a 15-inch Bigfoot footprint depicted in a 1947 newspaper, well before the 1958 hoax.
After the museum tour, I explored the small town (population 1,710) that has built businesses around the legendary animal. In addition to a hamburger joint selling Bigfoot Burgers, there is a Bigfoot Steakhouse, and a huge mural of Bigfoot gracing the side of Ace Hardware Building. Sadly, the September 2020 60th Annual Bigfoot Daze Celebration has been cancelled due to COVID-19.

My next goal was to explore Bigfoot Scenic Highway. The 89-mile roadway begins in Willow Creek and ends in Happy Camp. Often paralleling the Klamath River, the journey provides stunning views of the California wilderness. Most of the area remains accessible despite the pandemic, however, some of the Native American reservations remain closed because of COVID-19.
Although my quest did not result in any sightings, (as if), the breath-taking scenery was worth the drive.
On the trek home from my weekend getaway, I detoured through the Humboldt Avenue of the Giants. Staring at the dense fern understory and gazing up at thousand year-old magical redwood trees, it was easy to imagine that there are still many unknowns lurking in the forest. So while I still don’t believe the Patterson/Gimlin footage documented a real Bigfoot, having observed the vastness of the wilderness, and the multitude of eye-witness accounts documented in the Bigfoot museum, I’m still rooting for the existence of the big creature.