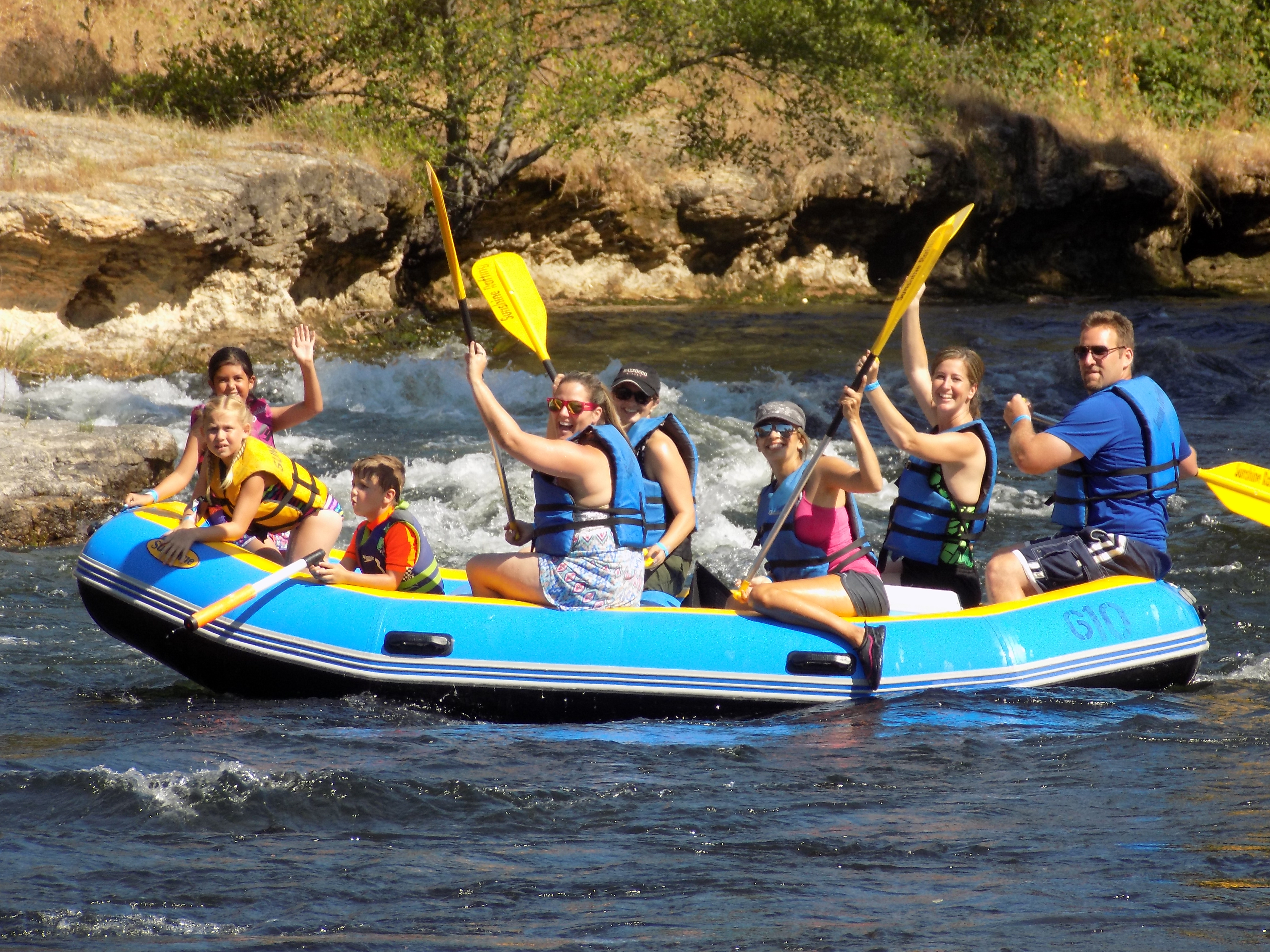 Once upon a summertime, I went whitewater rafting on the Stanislaus River with my pal Sue and other friends. We have a good time when we travel together. We laugh a lot.
Organized recreational California river rafting appears to have begun in the mid-1970s. Rafting season generally runs from April-September. Trips cater to the timid and to the adventurous and include a guide, except for those advertised as self-guided. They range from a few hours to a few days. More than eleven providers offer rafting on twelve major rivers in Northern California. Several, including Sunshine, claim upwards of 30 years’ experience.
The night before our day on the river, Sue, I and others crowded into a room at a weathered motel near the river. We stayed up late consuming adult beverages and debating the weather, the rapids, the rafts and the guides. Most had rafted before, but I was a newbie. I cringed at the thought of navigating rapids.
After an abbreviated night’s sleep, we headed for the river early morning. We carpooled to the bus stop where we would be transported in rickety old busses to the chaotic launch site upstream. Six to eight people were assigned to each inflated rubber raft, including a guide at the rear.
Before launching, our guide advised us to grip the inside bottom of the raft with our toes, slipping them into small loops there, because the huge, curved, air-filled sides were virtually impossible to hold onto. I quivered with exhilaration and dread.
And off we hurtled down the river at increasing speed, darting past some rocks, skimming rapidly over others; sideswiping downed trees and other vegetation, guided by the rapid current and skill of our guides, soaked by icy splashing water.
Two people got bounced off. One got wedged in an eddy between boulders until a guide in another raft pulled him out. The other careened downriver on her back, feet first until rescued in calm water.
“OMG, OMG, I’m going to die!” I thought. “I’m going to drown, crack my skull or break my legs.” I wanted to share my fear, but the roar of the rapids and screams of others made conversation impossible. I was alone with my terror.
The flotilla of rafts stopped for a break near caves that we could wade into. This was very cool, a good place to get my heart rate down. Then back on the river, we go, OMG.
Most of us were sunburned, exhausted but alive and unbroken when our guides paddled into a predetermined disembarkation point, anchoring somewhat perpendicular to the bank. While the group disembarked to the left or upstream, Sue and I disembarked to the right. No-one else disembarked to the right. Sue and I were probably cracking jokes when the guides were giving instructions.
Letting ourselves over the side of the raft into shallow water, our feet touched down on a silty, oozy river bottom. Sue and I joked about the color and texture of the muck under our feet. It was like soft, oily fireplace soot. The harder we tried to find solid footing, the more we laughed…and sank. City-bred, I never believed quicksand was a real thing, but reality quickly became evident. Extending our arms like pontoons, we thought we’d stop sinking, but nope.
No-one could see us on the downstream side of the raft. No-one could hear us shouting for help over the din of people disembarking on the upstream side. Descending into the black and slimy gunk, now up to our armpits, we were facing death, yet we were laughing hysterically at the absurdity of the situation.
No doubt counting heads, our bronzed and muscled guide finally realized we were missing and came around to our side of the raft. Along with another guide, they quickly produced longboards, laid them over the muck, and crawled out on their bellies to pull us to safety. Not an easy task, as the muck was intent on sucking us in. Sue lost a shoe.
Once on shore, covered with stinky sooty-looking muck, the guides gave us five minutes to find a safe spot along the river to wash off before boarding the bus. Without soap, that muck still clung to our skin and clothes, and we stank. Once on the bus, others steered clear. Given the nose-holding and stares, Sue and I continued to laugh so hard our sides hurt.
Whitewater rafting was a thrilling experience. The guides were terrific. The trip was loads of fun and the scenery was beautiful as it floated by. I highly recommend the experience for lovers of such thrills and chills, but I advise following the few rules to be safe.
For information about rafting on the Stanislaus River, contact Sunshine Rafting Adventures, www.raftadventure.com.

Robin Gigoux, humor and reflection inspired by personal experience. An author as Peechi Keane: “Chronicles of an Occupational Prostitute, A Workplace survival Story” and contributing author of “Insight, Hindsight, & Flights of Fancy”, an anthology.