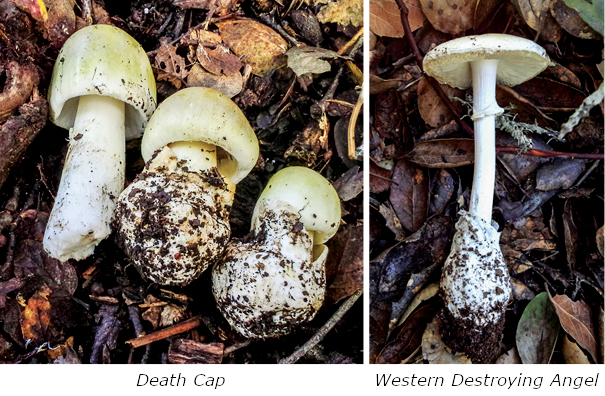 Each year, mushrooms come out after the first fall rains, which we had November 20. Mushrooms are ecologically important and can look beautiful – but some of them contain dangerous toxins. The Death Cap (Amanita phalloides) and Western Destroying Angel (Amanita ocreata) are two of the world’s most toxic mushrooms, and both can be found in East Bay Regional Parks during the rainy season.
The Death Cap and Western Destroying Angel mushrooms contain amatoxins, a group of molecules that inhibit cellular metabolism in many animals. In mammals, the liver and kidneys are typically the first organs affected after ingestion. Symptoms don’t usually appear until up to 12 hours after consumption, beginning as severe gastrointestinal distress and progressing to the liver and renal failure if treatment is not sought immediately.
“Both the Death Cap and Western Destroying Angel grow near oak trees,” said East Bay Regional Park District Naturalist Trent Pearce, who is based in Tilden Regional Park and documents the fungi in East Bay Regional Parks. “They can be lethal to both humans and pets if consumed.”
The Death Cap is a medium-to-large mushroom that typically has a greenish-gray cap, white gills, a white ring around the stem, and a large white sac at the base of the stem. Though the death cap is mainly associated with oak trees, it has been found growing with other hardwoods. It was accidentally introduced to North America on the roots of European cork oaks and is now slowly colonizing the West Coast. The Death Cap is not native to California.
The Western Destroying Angel is a medium-to-large mushroom that usually has a creamy white cap, white gills, a white ring around the stem that disappears with age, and a thin white sac at the base. It fruits from late winter into spring. It is associated exclusively with oaks. Unlike the death cap, it is a native California mushroom.
“Collecting mushrooms in East Bay Regional Parks is not allowed,” said East Bay Regional Park District Public Information Supervisor Dave Mason. “The Park District urges the public to be safe and be knowledgeable about toxic mushrooms.”
The Death Cap and Western Destroying Angel can also be dangerous for pets.
“Dog owners should keep a close watch on their dogs during the winter months,” said Mason. “Pet owners should contact a veterinarian immediately if they suspect their pet may have eaten a toxic mushroom.”
While the Death Cap and Western Destroying Angel mushrooms are responsible for most cases of mushroom poisonings in California, deadly toxins can also be found in Galerina and Lepiota mushroom species, both which occur in the Bay Area as well.
The public can learn more about the fungi of the East Bay Regional Parks at the annual Tilden Fungus Fair, Sunday, February 3, 2019, at Tilden Nature Area’s Environmental Education Center.