A Day on the Bay

Not all adventures require substantial time off, expensive equipment, and logistics. In fact, some of the best adventures are right before us, here locally.
At a recent golf charity-fundraiser, my mother won a day of sailing on the San Francisco bay. Having no interest herself and being somewhat frightened of sailing, she was quick to offer the trip to me, which I gladly accepted. The excursion included a day of sailing around the bay with six guests aboard a Beneteau Oceanis 48, a world class sailing yacht equipped with the latest, state of the art electronics, and all the interior appointments you would expect of a half a million- dollar yacht. Our crew for the day included my wife and I, and four of our friends and neighbors, none of whom had ever sailed before.

The day started like any other, with just a hint of light fog in the early morning, which gave way quickly to the rising warmth of the sun.  The forecast for the day was for light winds and sunshine, a perfect forecast for sailing. Eager to get situated and to let the day unfold, we boarded the yacht at the Marina Bay harbor in Richmond. 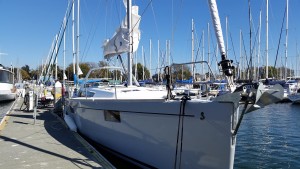 I’m by no means a skilled sailor, however just a couple short years ago I learned the basics of sailing and navigation and received a license to sail basic keelboats. I prefer to think that I have just enough knowledge and information to be dangerous and quickly overwhelmed. However, I did master the man-overboard technique so we at least had that going for us.

It’s often been said among experienced sailors that the San Francisco bay is one of the most challenging places in the world to sail with the abundance of traffic, the shifting tides and currents, and of course the late afternoon winds. But I’m not so sure.  Navigating the seas and dealing with the Katabatic winds off the coast of Antarctica seems just a bit more serious to me.

With light wind at our backs, we raised the sails and set out toward Angel Island. Now when I said that we “raised the sails”, what I really meant was that we pushed a button, and the sails were raised automatically; did I mention that we were aboard a Beneteau Oceanis 48 with state of the art electronics?

Moving at a comfortable pace we took in the sights of Tiburon, Belvedere and Sausalito before heading toward the Golden Gate Bridge. As we drew closer to the bridge, a small group of dolphins appeared off the stern of the sailboat and swam beside us for a short distance. The boat began to lean as the wind blew harder and we made our approach toward the Marina district with views of downtown on the right and Alcatraz Island to the left. 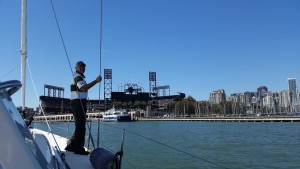 We sailed by Pier 39 with thunderous applause (and smell) from the many seals who’ve taken up residency nearby. After sailing under the Bay Bridge, the Millenium Tower came into view. The Millenium Tower as you may have recently heard is a new 58 story skyscraper in downtown San Francisco that is slowly tilting and sinking into the soil. As we passed the tower, we all took a guess at which way it appeared to be falling. At best, it was a split decision as some saw it leaning to the left while others were sure it was leaning to the right. It’s not quite the leaning Tower of Pisa, but give it another 843 years and it might come close.

As luck would have it, a Giants game was under way so we sailed over to McCovey Cove to try our luck and catching a homerun before it splashed into the water. I’ve sat in the stadium before and watched a game and wondered who those people were aboard those fancy sailboats.

I stood at the helm as a light wind blew and the bow was turned back toward the marina from where we started.  I knew that all good things eventually come to an end; however, for just a moment I thought how great it would have been to set the auto-pilot toward Hawaii.