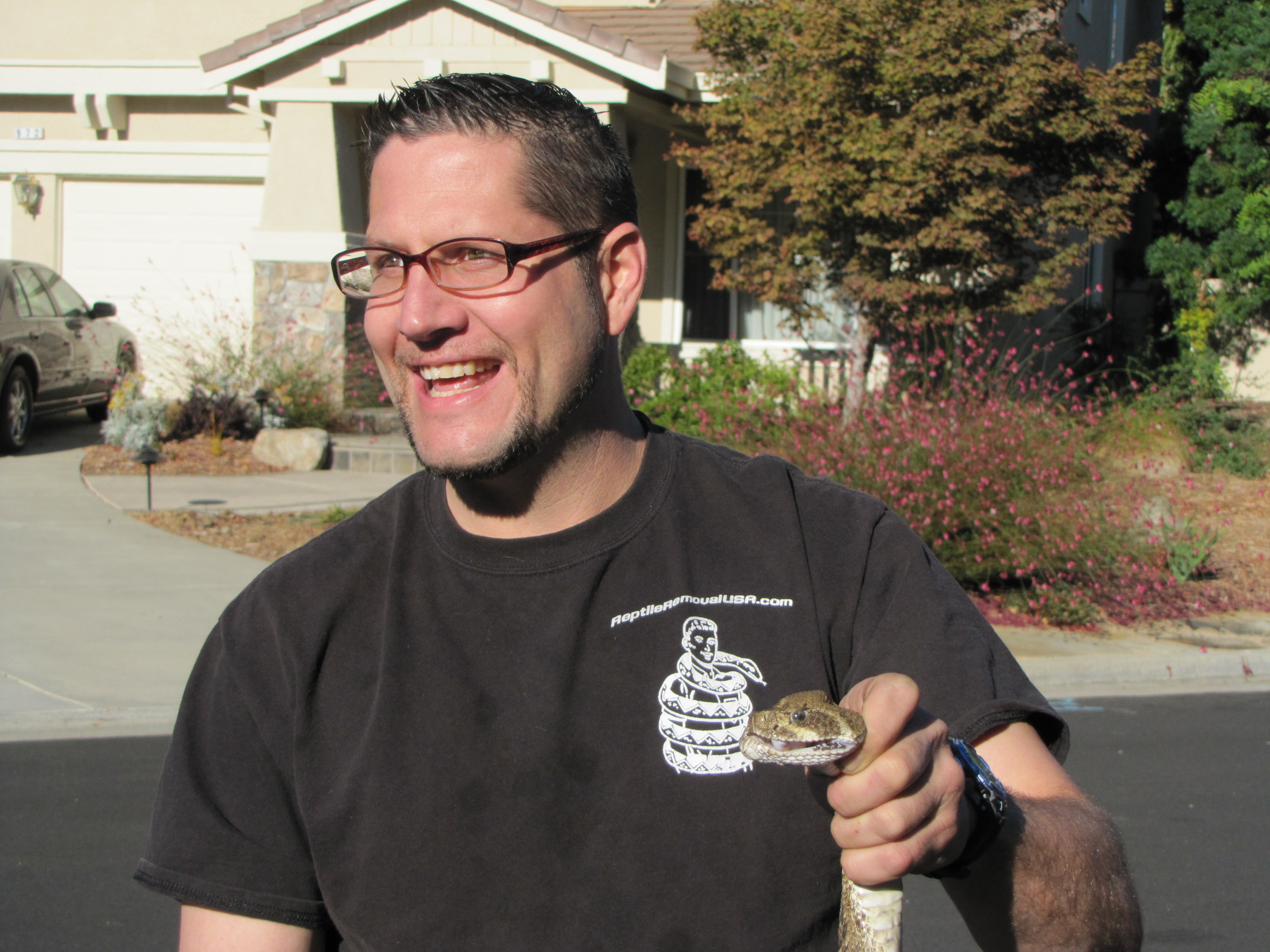 Sgt. Louis (Lou) Fraser is a retired disabled veteran with a small pension.  He is also owner of the Rattlesnake Removal company out of Rocklin and Vallejo.  He is one of very few rattlesnake removal specialists in Northern California.  It was his company that addressed the Zodikoff snakes-in-the-cabinet episode mentioned in the Diablo Gazette article, “Snakes On A Plate”.

“I’ve been on the news and in a few papers this year, so I’m happy to talk with Diablo Gazette too,” Lou tells me.   I took him up on that and asked him to meet me for a brief interview at my home.

He promptly arrived at 8 a.m.   I answered the door barefooted, so after a quick introduction and handshake, he told me to get some shoes on and come outside.   Lou was a stocky, fit, but gentle guy, in a WWF kind of way.   I put on my flip flops, uncertain to where we were going.   He led me to his truck parked in front where I met his younger brother, Jose, also a snake wrangler, (my term, not theirs) and pulled out a white bucket from its bed and dumped it onto my driveway…FIVE live rattlesnakes!  – One was pregnant and maybe 3 feet long, the other four were juveniles.

“I caught all of these around this area,” Lou says.   By area, he’s talking about the neighborhoods surrounding open space around Mt. Diablo, including mine.

There are 36 species of rattlesnakes, Mt. Diablo and Northern California is blessed with only having one, the Northern Pacific rattlesnake, which we have plenty.

These two gents, couldn’t be more cool.  The rattlesnakes were crawling between their legs and into my yard.  They would pick them up or corral them back to around their feet.  Now I understood why he wanted me to put on shoes.  I kept my distance, but these two clearly knew snake behavior.  Two cars stopped to see the spectacle, and Lou picks one up for a photo op.  Jose eventually picked the adult up behind the head to show the fangs. Only then did it become angry and start rattling. When he forced the mouth open, yellow venom squirted onto the lawn. 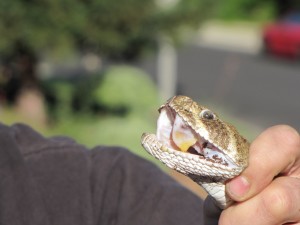 Yellow venom is dripping from its fangs blood clotting. “Babies can’t control their venom, but they have small venom sacs.” Jose explains.   “The large snakes have large sacs and can give you a pretty large and dangerous dosage.”    Neither Jose or Lou have ever been bitten in eight years of business.

Most of their work is done March through November.   Summer and early fall are the most active.  That’s when they have the best chance to find the dens.

“Right now the babies are being born,” Lou warns.   “Rattlesnakes will congregate in two places.  Dens and nests.  Dens are for hibernating and finding mates.    The best way to find them is as they are going into the den in the Fall or coming out at Spring.” 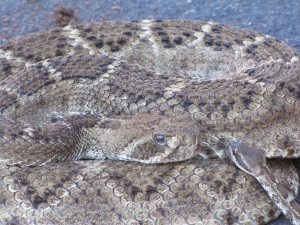 “I’ve been very active in this area these last two months,” Lou tells me. “There is a huge increase of rattlesnake activity in the Mt.  Diablo area.  Just in the Crystyl Ranch area recently, a boy was bitten on the ankle, and a dog was bitten in the face, (both survived) and Steven Zodikoff found two in his cabinets plus these five snakes were also captured nearby recently. This area is infested.  I’ve offered my service to the home owners association but haven’t heard back from them.  I work with a few management companies that have me perform a monthly service. Stone Valley Oaks in Alamo is managed by Jean Bates and Associates and they have been protecting their client for years with my company. They are also backed right up to Mt Diablo.”  Lou says.

Rattlesnake Removal services most of Northern California. “I’ve been putting in 15-hour days these past couple of months.”    Rattlesnake Removal practices humane disposal, meaning they catch and release them far away from development.  “They are excellent for keeping the rodent population in check. So we won’t kill them,” Jose advises.    They leave that up to their natural predators:  king snakes, feral cats, skunks, and raptors. 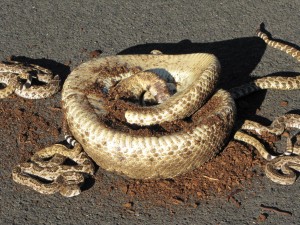 Here’s why all the activity lately.   “From August into October, the females will gather in nests and give birth to up 30 live babies each.  Say three females are in the nest, that nest can suddenly be crawling with up to 90 rattlesnakes.”    Half will go off right away into the wild, the other half may stick around for a month, or die off, or be killed and eaten by predators.  In the fall, rattlesnakes will find dens and gather to  mate and hibernate during the colder months. 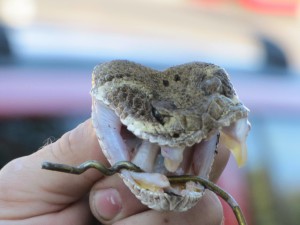 One word of caution, rattlesnakes in this area generally do not use their rattlers as much as previous generations did.   The more aggressive snakes that do rattle tend to be killed off leaving the more docile genetics behind.

Rattlesnake Removal prefers to work with HOAs.  “We install snake fences and remove snakes for homeowners, but with developments, we need to find and remove dens and nests.” That’s something the management company could facilitate and will, but it may take some homeowner nudging.”  If they can work a monthly service with HOA’s, “I guarantee a 90% reduction in snake incidents,” Lou says.

If you live in an HOA, contact your management company to explore monthly removal services.      Fees vary depending on the task, but neighborhoods can start the snake cleanup for as little as $1 per home per month.   So when kids and pets are getting bitten, it’s a serious problem, and it is time to take professional action.  Please DO NOT attempt to do rattlesnake removal on your own. You can trust these guys to know this business.  http://rattlesnakeremoval.org       For more information on Rattlesnake Removal see their ad on the back page.

They are also currently in talks with a production company for a TV Reality show.

After the interview, Lou, Jose and Peaches (their friendly snake-sniffing dog)packed up all the snakes in my yard back into their bucket and drove off into the morning sunrise. 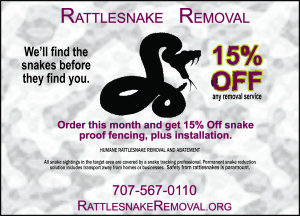