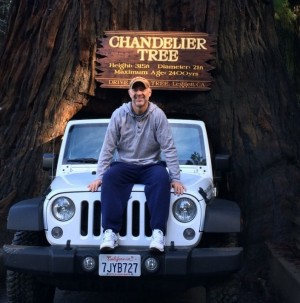 It’s the dead of winter and El Nino is delivering much needed rain to the Bay Area, but rather than hunker down like Punxsutawney Phil,       I’ve decided to take advantage of a brief change in the weather to head north for a quick getaway.

The destination for the day is the tiny unincorporated community of Westport, CA, located 13 miles north of Fort Bragg on Highway 1.

Westport is located on the “lost coast” of northern California and includes an old general store, a church, a small shed that doubles as the post office, and a few dozen houses.  It’s an ideal destination for those looking to get away from big city stress.
Along the way to Westport, I make a quick stop in Leggett to

see the Chandelier Tree, an immensely large coastal redwood. The Chandelier Tree is special for many reasons, but not because of its enormous size standing tall at 315’ and 21’ feet in diameter, and not because of its age at nearly 2400 years old, pre-dating the birth of Jesus by hundreds of years. The tree’s most significant characteristic instead is that a substantial portion of its trunk has been carved out; a hole so large in fact that you can drive a small vehicle through it. While I paid the $5 entrance fee, the park host strongly recommended against any attempt to drive through the tree in my jeep; it was only then that I felt compelled to give it a try. Although I made it through without a scratch, it was definitely a game of inches.

Winding through the mountains and heading east toward the Pacific Ocean I set my sights toward Westport. Just before reaching town, I noticed a small road appearing on my GPS map. With clear skies and time on my side, I decided to take the road less traveled.

Usal Road is an 8 mile long, one-lane dirt road, which winds through dense trees and brush, moving left and right, and up and down while ultimately delivering you to a quiet, uninhabited beach. The road for the most part is a muddy, slippery mess and is only traversed, at least on this day, with a four-wheel drive vehicle. The prize is reaching the beach and hearing the pounding of the waves, and seeing the rush of a great river flowing from the hills; reminiscent of Ala

ska. (“From Concord to the North Pole”, Diablo Gazette; December 2015, diablogazette.com)
So much so, that I encounter an elk while it roots in a nearby bog… a majestic sight, so true to the surroundings, adding to the ambiance.

Glass Beach is also a must-stop destination while traveling through Fort Bragg. Unfathomable by today’s standards, but very much the custom in the early 1900’s, local residences used the Pacific Ocean to dump appliances, dishware, bottles, glasses, and all manner of trash. Literally, the local dump was at the end of a pier. Out of sight, out of mind I suppose. In spectacular response however,

Mother Nature over the course of the last 100 years has shaped and molded much of the debris, before returning it in an array of shiny colored and softly rounded iridescent glass particles. In an ironic twist, the former dump is now a protected resource, and it is now illegal to remove debris from the beach.

Just a few minutes’ drive outside of town is the Westport Cemetery.   The location offers unrivaled beauty perched on the bluffs overlooking the Pacific Ocean…with views to die for, literally.

In all, my day trip would take 13 hours and cover 435 miles of some of the most picturesque views along the backloads of northern California. As I pulled into my driveway, tired from a long day’s journey, I felt very inspired. After all, where else can you drive through a tree, see an Elk at close range in its natural habitat, feel the strength of the ocean, reconnect with nature, and still be home for dinner?