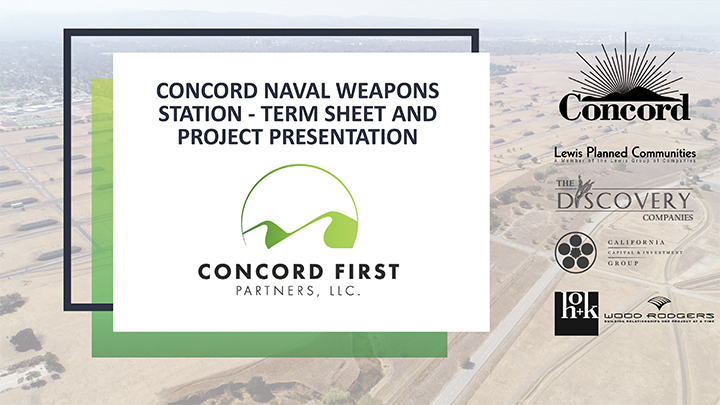 In the season of hope and goodwill toward all, the emotions on the development project of the Concord Naval Weapon Station surrounds it as it moves forward to its next phase. Unfortunately, the emotions are not exactly in concordance with the hopes of the season.
Wishful Denial
About a third of the opposition to the base development is rooted in the fundamental opposition to any development on the Base and a wish for it to remain open space. This ship has sailed and was sunk about 15 years ago. The reason we have already secured a gigantic regional park of over 2500 acres is because of the agreement to develop the rest.
That agreement also involves giving the Federal Government a bunch of money and requiring the city through its developer to secure housing for the homeless and affordable housing. Otherwise, the Navy would simply, in effect, sell it at bid to the highest dollar amount without any restrictions. This is exactly what the Fed’s did with the Coast Guard property.

Fear and Weakness
The world is a dangerous place. We have an economic system which is based on the focus of financial gain first and foremost. Wall Street is dedicated to this. All developers have massive dangers attached, and none can be trusted. Mother Theresa never formed a Master Developer Company.
Given the choice between dealing with a Wall Street firm with a recent history of breaking a labor agreement and having walked away from a municipal agreement, we chose to deal with a combination of partners that we felt gave us the most oversight power relative to ourselves to get things done.
We have already seen this play out so far with Concord First Partners when we dealt with their concerns in the Exclusive Negotiation Agreement in October 2021, and their problems in May of this year with the extension of the agreement and their fears of the project. The city moved to redirect them to focus on the term sheet and secured items beyond what was required in the original request for bid.

Hatred
One cannot separate from the noisy background on the term sheet, the disdain, if not outright hatred, of one of the partners, namely Discovery Builders which is now in its third generation of ownership by members of the Seeno Family, and by the way, may be in its 5th generation by the time the project is done 30 to 50 years from now.
This foul emotion was epitomized by Save Mount Diablo (SMD) whose representatives to the pre-August 2021 vote actually stated that they were totally opposed to anything that included anyone from any member of the “notorious Seeno Family” regardless of present or future generations, brothers, sisters, grand or great grandchildren regardless of involvement with the specifics of past acts.
They refused to meet with Concord First Partners and the City to work on their issues even after the Park District settled their arguments and stated that they support working with Concord First Partners on the base development.

Hope
What has transpired within the last year gives me hope that the city can obtain the goals it has set for the development and more. Here are a few of the bonuses outlined in the term sheet:
50 percent of the residential building will be non-affiliates, meaning Non-Discovery/Lewis/CCIC builders.
Originally all bidders said there was no chance of getting any kind of gap finance for the affordable housing component. Now we see they are looking at getting it.
Originally the city’s $14-16 million up front costs were to be paid back over the course of the project. Now it is within the first two phases.
We have larger numbers of affordable housing as well as more housing in general.
We have commitments to not just add a platform for a library, but actual dollars.
Tournament fields again; not just a piece of land with utilities to its edges, but $100m.
$65 million to the Campus district in addition to the utilities.
Four acres of land for a Veterans Hall.
Connecting the trails in and out of the Base.
I look forward to making this happen, and to creating a new era and legacy for all of us.