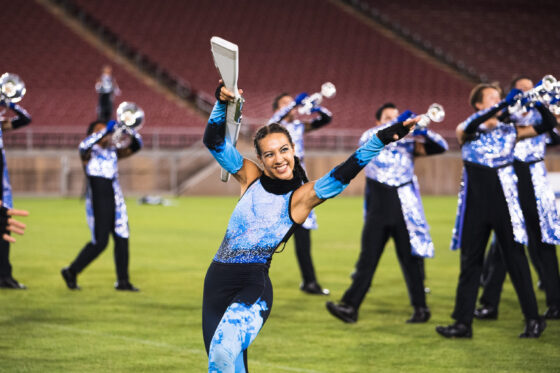 For the Blue Devils, 2022 is shaping up to be a banner year as they remain undefeated in five events. On July 10 they won the Drum Corps International (DCI) West Championship at Stanford University Stadium against many of the nation’s most exceptional competitors. The World Class Blue Devils are currently ranked #1 in the country ahead of Boston Crusaders.
Stanford University’s Stanford Stadium, a longtime marquee DCI Tour event host, provided a scenic Bay Area backdrop for 11 memorable performances.

For the fifth time in as many appearances on the 2022 DCI Tour, Blue Devils emerged victorious, becoming the fourth World Class Corps this season to eclipse 80 points.
Blue Devils B also took first in the Open Class by the narrowest of margins just a tenth and half, ahead of second Place Gold corps of Oceanside, CA thanks to leads in the general effect and music captions.
Blue Devils B drum major Maggie Early said that the DCI West event is one that her corps has been looking forward to both in terms of its size and its scope.
“We call this the Mini Indy,” Early said as a nod to the season-ending DCI World Championships in Indiana this August. “And that got everyone really hyped. This was one of our better runs we have had (this season), and I am proud of them and how much they have grown.”

In the 2022 Pacific Coast Open Class Championships, July 22-24, Blue Devils B finished 3rd overall.
The World Class Blue Devils then competed in the DCI Southeastern Championship in Atlanta on July 30, and also won by the slimmest of margins. “That whole run felt electric,” Blue Devils drum major Dina Bratanovic said. “During the run, I got goosebumps and chills; just listening to the horn line, I could feel the passion coming off the field from the performers. It was breathtaking.”

Blue Devils then traveled Annapolis, Maryland for the DCI Annapolis on August 2 with another win and marched over to Allentown, Pennsylvania for the DCI Eastern Classic and won on August 5.

We will keep you posted.