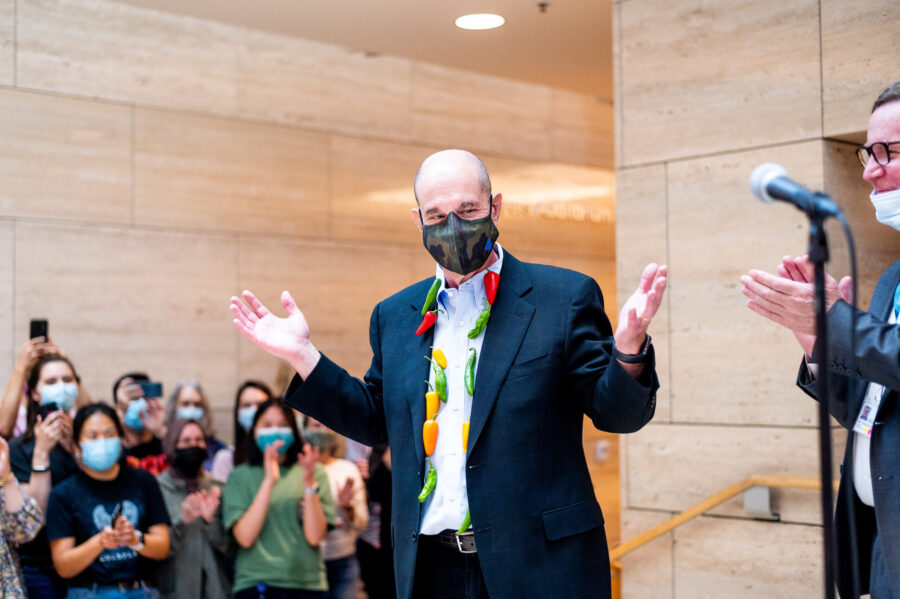 Walnut Creek is the home of two internationally leading scientists from University of California San Francisco. Both were recently recognized with the highest of honors in Science and Medicine.
On October 3, David Julius, PHD, a biochemist and molecular biologist at UC San Francisco won the 2021 Nobel Prize in Physiology or Medicine. Julius received the prize jointly with Ardem Patapoutian, PhD, a professor in the Department of Neuroscience at Scripps Research. Both were pursuing work into the neuroscience of pain.
“No sensory system matters more to survival than pain,” Julius states. They each will receive a medal of honor and split the $1.1 million award.

Julius’ 32-year career at UCSF has been driven by an acute awareness of the need for new drugs that could effectively treat pain without the side effects.
His groundbreaking work has focused on how our bodies sense heat, cold, and chemical irritants. Julius used capsaicin, a compound from chili peppers that induces a burning sensation, to identify a sensor in the skin’s nerve endings that responds to heat – leading to new insights about the fundamental nature of pain and new targets for pain therapy. His research could lay the foundation for a new class of non-opioid-based painkillers, a crucial need as communities across the country are hit hard by the opioid crisis.
In November 2019, Julius had won the 2020 Breakthrough Prize in Life Sciences award which affirmed his research on the biological molecules, cells, and mechanisms involved in pain. Julius has homed in on a class of proteins called TRP (pronounced “trip”) ion channels as key players in the nervous system’s pain-signaling apparatus.
“As a scientist, you want to understand the basics,” Julius told UCSF News after winning the Breakthrough Prize. “Identifying signaling molecules within pain pathways has relevance for drug design, because those are potential targets for the development of new treatments.”

Over his lifetime, Julius has received numerous honors and awards, including the Canada Gairdner International Award, the Shaw Prize in Life Science and Medicine, the Kavli Prize in Neuroscience, the Dr. Paul Janssen Award for Biomedical Research, the Passano Award, the Prince of Asturias Award for Technical and Scientific Research, the Scolnick Prize from the McGovern Institute for Brain Research, the Unilever Science Prize, and the Klaus Joachim Zülch Neuroscience Prize. He is a member of the National Academy of Sciences, the National Academy of Medicine, and the American Academy of Arts and Sciences.
“Congratulations to David for succeeding on the highest scale,” said Talmadge E. King Jr., MD, dean of the School of Medicine. “Just as his research opens up new avenues for drug development, his commitment to the education and mentorship of future scientists inspires those around him to push the boundaries of what’s possible.”
Julius education includes B.S. degree in Life Sciences at MIT, Graduate Studies in biochemistry at UC Berkeley, and post doctorate at Columbia University. “Joining the UCSF community has had many wonderful outcomes, not least of which was meeting my wife,” Julius says. Holly Ingraham, PhD, is also a decorated member of the faculty.

Ingraham is an American physiologist and Professor of Molecular Physiology at UCSF. Her research focuses on women’s reproductive health, specifically the sex-dependent central regulation of female metabolic activities and biology.
Her awards include Brook Byers Basic Science Award in 2012, and an inductee of American Association for the Advancement of Science in 2019.

But the most prestigious honor happened this year when she was elected into the National Academy of Sciences, an agency started by Abraham Lincoln, of which Julius is also a member. Members of this organization serve as “advisers to the nation” on science, engineering, and medicine. The group holds a congressional charter under Title 36 of the United States Code.
Each year, current members elect new members based on their distinguished and continuing achievements in original research. Election to the National Academy is one of the highest honors in the scientific field.
Ingraham grew up in Walnut Creek. She attended public Schools and graduated from Ygnacio Valley High. For her, interest in science came at an early age when she received a Bausch & Lomb microscope as a gift. She spent her free time exploring all of the objects she could in the vicinity of her home using that microscope.
“Those who devote their lives to creative pursuits are often inspired by a singular event,” she says. “Mine came from my great-grandfather, whose 1890 Bausch & Lomb microscope came into my possession when I was 10 years old. I picked it up and began exploring the biological world of Northern California, never to stop.” Her scientific career began as an undergrad at UCSD, where she studied biological science and behavioral science. Ingraham earned her doctorate at the UCSF.
Both agree, that the key to building interest in science is cultivating curiosity at an early age. As for schools teaching science, Dr. Julius says he thinks we can do better. “I think we can always do a better job. When I was a kid, science was kind of dry, relying on things like memorizing the periodic table. “If there was anything that would turn you off of science, I can’t think of anything better.
“When you teach kids science, you want to not make it a fact memory thing but a conceptual thing. You have to raise their curiosity. They must learn to ask questions about things we see in nature, or what we think about in terms of medicine or physics and the cosmos.”
Julius attributes his interest in science to a “…really good high school physics teacher. He made things fun and conceptual. He would give us problems to take home and figure out puzzles. And working in a lab in college was fun.
“Science is about asking questions. The main goal of a teacher is to get you excited about something. The morning after the announcement of winning the Nobel Prize, I agreed to talk to students on the web, 500 kids in classrooms across the world zoomed in and they asked really good questions.”
Ingraham agrees. On her web page she states, “…sporadic events are not enough to support a lifetime of curiosity and discovery. That support would come via the State of California through an amazing and accessible public education system…which has supported my curiosity-based discovery research program continuously for over 25 years. Unwavering support also comes from family and mentors who provide the personal strength and resiliency needed to overcome moments of disappointment, insecurity, and self-doubt.
“I thoroughly enjoy my life as a scientist and continue to be addicted to the rare experimental successes sprinkled among the many failures inherent in the scientific process.”
The researcher couple has been working in this prestigious field for more than thirty years. They have a son, 21. Is he on the path of scientific discovery too?
“His passion is in the arts,” Julius responded.

SCENES FROM HOME AFTER WINNING A NOBEL PRIZE