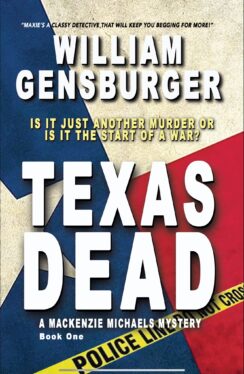 Texas Dead (Alt Publish, 2021, 273 pages, $12.99) by William Gensburger, is the first novel in the Mackenzie (Maxie) Michaels Mystery series.
In “Texas Dead,” people are being murdered in Corpus Christi, Texas. Lots of people. And there is a pattern. All the victims were shot in the back of the head except for the latest death. Mackenzie ‘Maxie’ Michaels, who has the intuition of a top-notch detective, is convinced the anomalous death of a prominent financial guru, Curtis Delaney, is related to all the others.
To solve the mystery, Maxie joins forces with Devin Parker, an investigative reporter who has a special interest in the case because he is Curtis’ cousin. Curtis’ office had been tossed and Curtis’ business partner, Rob, can not understand why the business was targeted.
Devin suspects Curtis’ killers think he might have had critical information related to the murder when he returns home to find it ransacked. He notifies Maxie, who worries that Devin is a target.
A panicked call from Tia, Rob’s girlfriend, has Devin rushing to meet with her. When she rushes away from their rendezvous spot, Devin follows her, and a chase scene ensues with an unmarked van.
The pursuit causes Devin to get in a motorcycle accident. His injuries are serious enough to land him in the hospital and the brush with death changes his outlook on life forever.
Meanwhile, Maxie frequently visits Devin as he convalesces in the hospital, and it soon becomes apparent that her feelings run deeper than a professional relationship with him.
Maxie’s partner, Kobe Jameson, has the utmost respect for his partner and is an all-around good cop and an all-around good person. Kobe spends his days helping at-risk teens at a local gym. Their humor and good-natured banter solidify a formidable team committed to catching the “bad guys.” Other notable characters include Hank, Devin’s boss, and Cochran, Maxie’s police chief.
As Devin sleuths a possible connection between Curtis’ death and his business partner’s dealings, Maxie’s admiration grows deeper. After Devin is discharged from the hospital, Maxie invites him to stay with her. As they continue to work the case, the two find themselves drawn to each other as they ultimately uncover the extent of the political scandal coverup that led to Curtis’ death.
Fans of Marcia Muller’s Sharon McCone series and readers who enjoy Ray Bradbury’s style of writing will most likely enjoy this book. Without giving away too much, one of the things that I really enjoyed about this novel was that it showed that sometimes when a hero puts themselves in danger, there can be consequences. It was Devin’s unique predicament that made this novel a fabulous page turner.
William Gensburger has been a writer most of his life. He is the author of “Distant Rumors,” an anthology of 16 stories about life and death, and “Homo Idiotus,” a collection of published newspaper editorials.
He was the publisher of The Concordian until 2015, but now lives in Texas with his wife and children. He is currently working on the second novel in the Mackenzie Michaels series “The Extremist”, due to be released in late September 2021. It will pick up with Maxie, Devin, and Kobe facing a threat, not just to themselves, but to Los Angeles, as the one called The Extremist sets out to destroy them all.
To learn more about William Gensburger, visit http://www.misterwriter.com/.