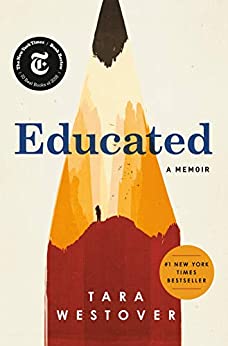 “Educated” (2018, Random House, hardcover, 352 pages, $15.17) by Tara Westover is a memoir about growing up as a Mormon girl in Idaho under a fundamentalist bipolar father. Tara’s life is rife with conflict and a cast of quirky characters. Even the mountain, Buck’s Peak, is a compelling character. Suffused with all the right ingredients, it is no surprise that this book is a page turner.
As a young girl, Tara’s entire world is experienced through the lens of her family. She is born at home and has never attended school or seen a medical doctor. Besides her parents, Tara’s siblings include Audrey, her older sister, and brothers, Luke, Shawn, Tyler, and Richard. Audrey marries young and adopts a traditional Mormon lifestyle. This creates a home environment where Tara is a girl among many boys and is determined to be their equal. The emotional abuse she endures under her father’s command is difficult to read. But the most egregious events that Tara suffers through growing up are at the hands of her sadistic brother, Shawn.
Tara spends her adolescent years working in her father’s junkyard and mixing herbs for her mother, a self-taught herbalist and midwife. There are stretches of time where Tara and her family prepare for the end of days by stockpiling food. Her homeschooling was so minimal that she had never heard of the Holocaust and had no idea what the “n” word meant, a name her abusive brother often called her.
Our young heroine lives in a state of constant danger due to her father’s recklessness. Her brother Luke sustains horrible burns in a junkyard accident. Tara has her own brushes with death while salvaging. The whole family is involved in two car accidents. No one uses seat belts and her mother is severely injured in one wreck. Traditional medicine is spurned, further creating misery for Tara.
Her teen life is transformed when she starts taking dance lessons. But her strict upbringing creates obstacles. It has been drilled into her that she must wear modest clothing. So leotards are out of the question. When her father attends her recital and sees the immodest clothing, he forbids Tara to continue. Tara is permitted to take voice lessons instead, where she sings in church activities that meet her father’s approval.
Tara may have succumbed to a traditional Mormon life of subservience and motherhood had her brother Tyler not intervened and encouraged her to apply to college. She was seventeen the first time she entered a classroom at Brigham Young. Launched into academia, clueless that she needed to read textbooks, she figures it out and, ultimately, pursues a decade of university learning at elite schools. Tara’s story is ultimately a tale of redemption.
“Educated” was a #1 New York Times, Wall Street Journal, and Boston Globe Bestseller. It was named one of the Ten Best Books of the Year by The New York Times Book Review. It was a Finalist for the National Book Critics Circle’s Award in Autobiography and for the Los Angeles Times Book Prize. Other accolades include being Named One of The Best Books of the Year by The Washington Post, O: The Oprah Magazine, Time, NPR, Good Morning America, San Francisco Chronicle, The Guardian,and Library Journal to name a few.
Tara Westover was born in Idaho to a father opposed to public education. She graduated magna cum laude from Brigham Young University in 2008 and was subsequently awarded a Gates Cambridge Scholarship. She earned a MPhil from Trinity College, Cambridge in 2009, and in 2010 was a visiting fellow at Harvard University. She returned to Cambridge, where she was awarded a PhD in history in 2014.
Fans of Jeannette Walls’ “The Glass Castle”, “Wild” by Cheryl Strayed, “Angela’s Ashes” by Frank McCourt, and “Eat, Pray, Love” by Elizabeth Gilbert will likely enjoy this book. It was certainly one of the most memorable books I have read this year.