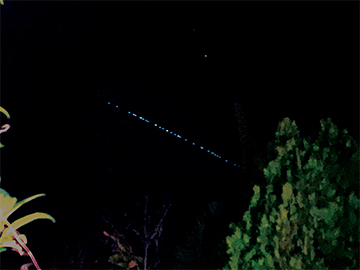 Several people from around the county have seen a strange string of lights hovering in the night sky. We are not being invaded. Meet Starlink, the satellite internet constellation under that is under construction.

Ever heard of these guys, Elon Musk of SpaceX, or Tim Cook from a little, known company called Apple, Inc.? Well, if you don’t know them by now, you’re about to get intimate because they are creating a new faster Internet in the sky, and it’s almost done. I wonder, are they adversaries or friends?
This new Internet is in space right now with thousands, yes thousands of LEO (low Earth orbit) satellites in orbit now and many more approved for launch to support their network. These satellites will cover the globe with wacky-crazy-insane high speeds, everywhere coverage, and no need to deal with a phone company, no weird equipment and, not to mention a low-low price. Oh, woops, I mentioned a low-low price.

Musk and Cook are the visionaries of our time. At least for now, these two are not adversaries but rather they oppose the existing establishment. Internet providers like Comcast, AT&T, Dish, DirectTV, Wave and the rest will be chasing these two for a decade. It will be like the Coyote (phone company) chasing the Road Runner (Musk and Cook), always chasing, never catching. Internet prices have risen to insane prices exceeding $100.00/month in most cases and these two are talking about prices under twenty-bucks.

The LEOs, thousands of them, will communicate directly with your cell phone, tablet and home/office computers. Because the LEOs are close to Earth they can provide faster service. There is a typical delay in geosynchronous satellites in high Earth orbit (GSL). This delay is about three seconds to reach the satellite and three seconds back to reach you, so 6 seconds round trip. This delay time is latency. The LEOs communicate in about one-two seconds round trip. This speed is on par with regular Internet latency experienced now with most landline or WiFi Internet providers but the difference is the LEOs have a huge broadband vs. landline or WiFi based systems. So, get ready for gigabyte speeds, not kilobyte or megabyte speeds, and low prices. That means speeds 1000x faster – it’s the reason Wile can’t catch the Road Runner.
The adversarial relationship between Wile, the phone company, and Elon and Tim, the Road Runners, is going to be big. Really big. For example, one of the benefits of speed is downloading an entire movie in about two minutes.
So go do the right thing. What do you think? Call me 925-672-9989 to express your view.