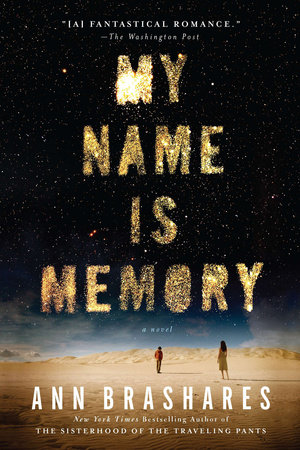 My Name is Memory (2011, Riverhead Books, 352 pages, $7.57) by Ann Brashares is the story of reincarnation, romantic obsession, and good versus evil, but most of all, it is a tale of redemption. Spanning over a thousand years across various continents, readers experience our main narrator’s life as Daniel traverses Asia Minor in 552, war-torn England in 1918, and Virginia in 1972. And in each new soul, Daniel wants one thing—the love of his many lives—Sophia. Amidst this epic love story, Brashares portrays events throughout world history and provides an expansive overview of significant moments that have shaped human civilization.
The story unfolds from both Daniel and Sophia’s points of view. Daniel is an exceptional human being, who as a soldier in 553 during a brutal war, makes a fatal error that shapes his destiny. Unlike most people, after he dies, Daniel’s core essence can remember his previous lives. In the spirit of the movie, Groundhog Day, this “gift” affords Daniel the opportunity to master languages and musical instruments, accumulate wealth, and preserve significant historical artifacts. He also amasses wisdom and one very vengeful enemy, who, like him, can remember previous lives. Despite the many advantages afforded Daniel, he repeatedly fails to secure the love of his soul mate. Although his long-lost love’s physical appearance changes over each new life, Daniel is able to recognize Sophia’s core being. Even more challenging is that Daniel must be an age that is compatible with Sophia when their multiple lives intersect—an event that doesn’t happen in several of Daniel’s lives.
For her part, Sophia, unlike Daniel, does not recall previous lives. But as we become acquainted with Daniel’s sweetheart, now Lucy, in the 1970s, it becomes apparent that her soul recognizes that she inexplicably yearns for an elusive boy that she met in high school named Daniel. Brashares keeps the tension rolling through the painful near-misses to bring this unlikely couple together.
Ann Brashares is the best-selling young adult author of multiple books, including the New York Times and international bestseller The Sisterhood of the Traveling Pants series and Forever in Blue. She is also the author of the New York Times best-selling adult novel, The Last Summer (of You and Me). The Sisterhood of the Traveling Pants was made into a movie in 2005. Brashares won the Indies Choice Book Award for Children’s Literature in 2002 and the Quill Award for Young Teen/Adult in 2005. The Sisterhood of the Traveling Pants 2, the sequel to the original movie, was released on in 2008. Ann lives in New York City with her family.
My Name is Memory was optioned for film in 2010. Readers who enjoy time travel, ponder what happens after death, fancy an epic romance, are tolerant of an open-ended conclusion, and enjoyed The Book Thief by Markus Zusak will likely find this novel a compelling read.