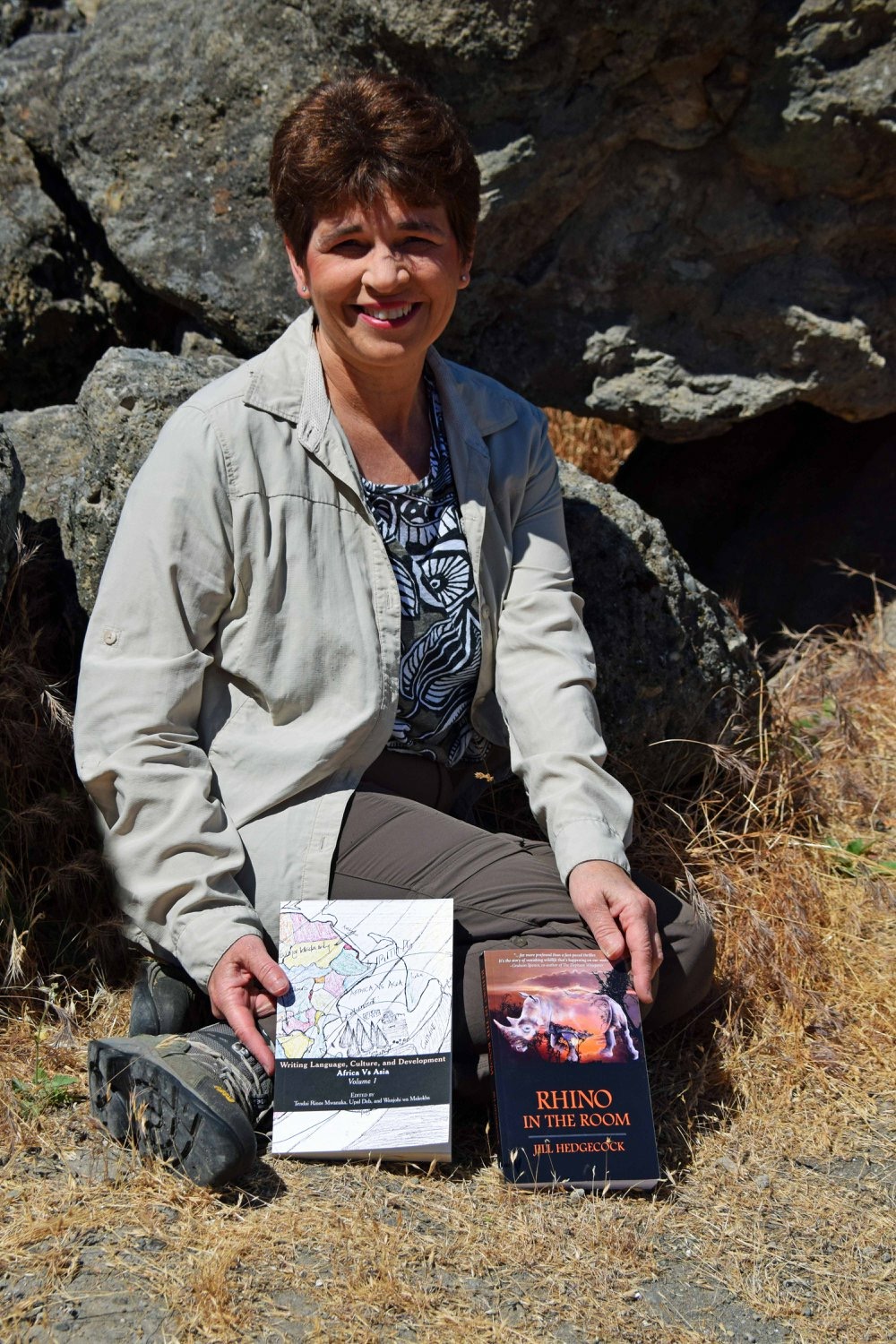 Jill Hedgecock, among many other things, writes our book review column. Her book “Rhino in the Room” has recently been released, a powerful story of a young woman’s African safari trip and the peril she finds herself in.

Q: What prompted you to go on safari and was your interest in the plight of the rhino as result, or something that predated the trip?

A: Elephants, giraffes, lions, rhinos… I love animals and I’ve always dreamed of going on an African safari. When it became a reality in 2015, the experience exceeded my high expectations. I marveled at the wonders of a round, copper orb highlighted by an orange-red sky at the end of the day. My heart races as an elephant blocking my game vehicle’s path, not out of fear, but out of sheer joy. Watching the majestic arc of a giraffe’s neck as it silently grazed on treetops, I had to pinch myself to remind myself that this was really happening.
While I was well aware of the poaching of elephants for ivory, it was during a game drive in Kruger National Park when I learned that three rhinos are killed every day for their horns.  I had no idea that rhinos were being slaughtered and that these amazing creatures may be wiped off the planet in my children’s lifetime.  I knew before the trip that I wanted to write a novel that would bring the experience of an African safari alive for people that are not as fortunate as me to have this experience, but when I learned about the plight of rhinos an idea for a different kind of story started to unfold.

Q: You’ve managed to take a valid, current, important cause, and wrap an interesting story around it. How difficult was it to find the balance in the telling to do justice to both aspects?

A: It was not difficult at all. In some ways I can attribute having this skill from my background in the sciences––a discipline where looking for logic in seemingly unrelated facts is commonplace. But I also wonder if the way I think is a result of early childhood.
When I was a kid, I loved doing jigsaw puzzles with my sister. We both found them easy and loved a challenge, so we started dumping multiple puzzles together, mixing them up (usually by throwing the pieces high in the air) and then solving them simultaneously (we dubbed the game “toss the salad.”) I think this playtime activity helped my brain develop in a way that the thought processes necessary to intertwine stories together aren’t hard for me.
Q: What is your writing process like? Rigid, fluidic? Notebook, computer? Coffee, tea, Hemingway cocktails? Solitary, public cafe, etc?

A: I gravitate toward being what writer’s call a “pantser.” This may seem surprising given my scientific background. But I find that characters tend to have their own idea about what the story is and I like to let them do their magic.  That said, for Rhino in the Room, I knew that time was of the essence and I wanted to fast-track the novel, so I created a muse board before I wrote a single word.  I used these images as a guide to keep details.
No notebook for me. I have to easily be able to move sentences and paragraphs around.
I prefer a quiet setting, so I don’t write in coffee houses. However, I do attend a Shush and Write event every week where a small group of 4 to 6 writers declare their writing goal for the evening, sit together and write for two hours, then reconvene to report our progress.

Q: You’ve written many articles, book reviews and more for different publications (including this one). What got you interested in writing in the first place and how did you start?

A: I am not one of those writers that started writing stories at the age of five or ten or even in college. I only took one English class when I studied biology at U.C. Davis. After I graduated and entered the working world, I even had a boss that told me during a performance review that I needed to learn how to write. I was completely shocked by this because I’d always excelled in writing assignments during my school years.
Q: What would you like to share about your discoveries for this novel that readers should know, and what resources can you guide readers to for more information?
A: Oh, where to start!  I have actually written five novels that are in various stages of completion.  One novel was actually agented, but it never sold. So Rhino in the Room is actually my fifth novel and my biggest discovery has been the marketing phase.  I also went all in and wrote a script for a book trailer.

[Books ‘N Pieces Publisher’ review:
Hedgecock has a mastery of evocative language and seamlessly guides the reader through the details of both an African safari adventure, as well as the poaching that takes place. The reader experiences everything in such detail that the experience becomes real. The plight of the rhinos is made quite clear and it is difficult not to feel helpless as the novel develops. Rhino eases you slowly into the action, but then holds you tight until the highly charged finish, leaving the reader exhausted and satisfied.]

Be sure to watch the trailer for the book at https://vimeo.com/287911864 You can buy the book from Amazon and other retailers: https://amzn.to/2D5KjUQ

This interview appeared in the October 2018 issue of Books ‘N Pieces Magazine. You can read the full issue at www.BooksNPieces.com.

Meet Jill Hedgecock at her book signing at the Concord Octoberfest October 12-13 in the Diablo Gazette tent Friday, October 12 from 6pm-9pm, Saturday, October 13 from 12-1pm.“Rhino in the Room” will be available for purchase on-site, or online at Amazon.com Books.