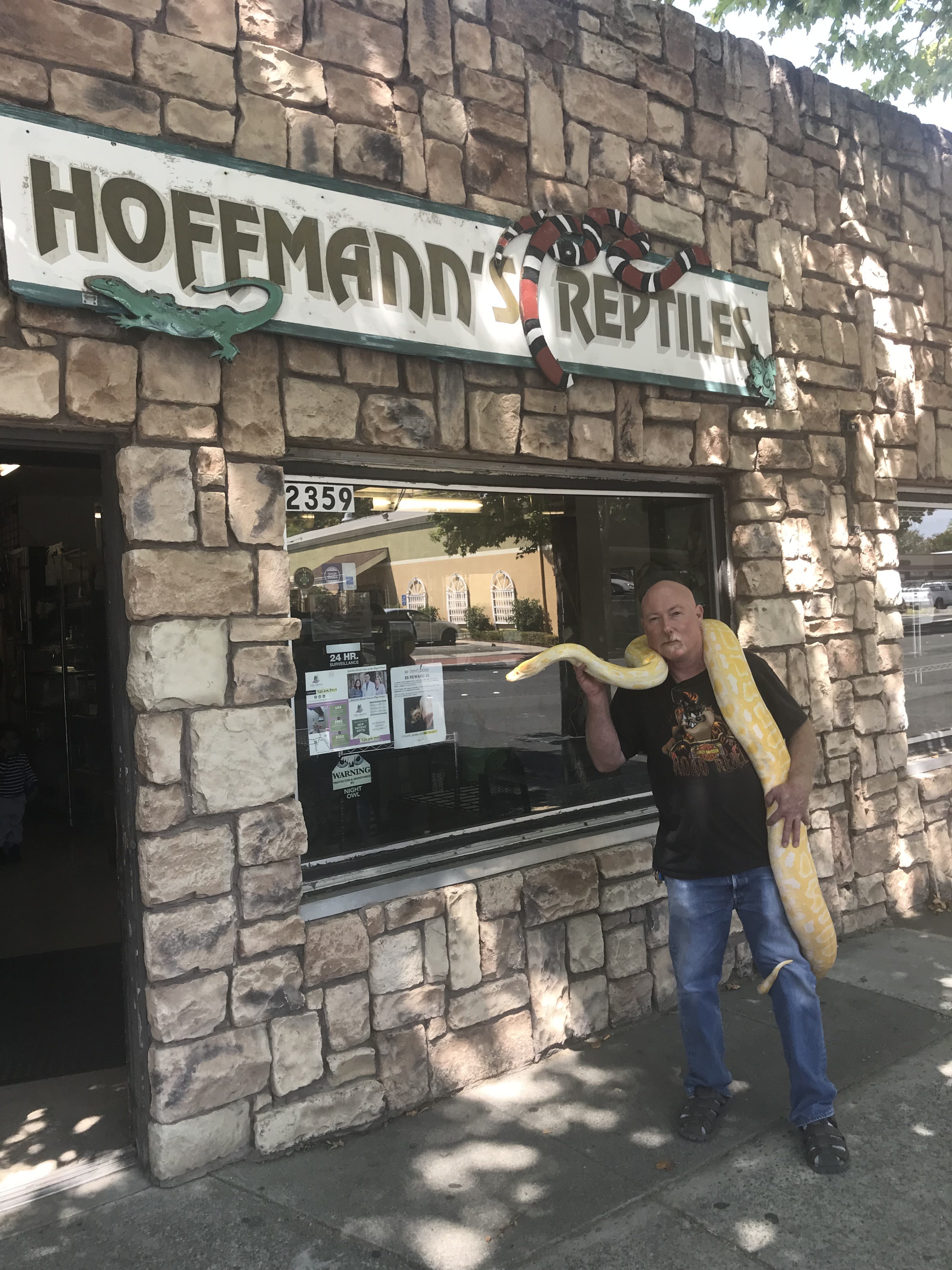 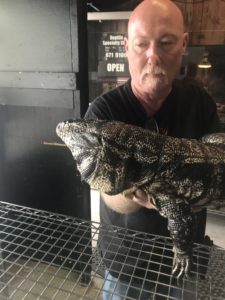 In 1980, Concord had about 10 pet stores. There was no Pet Co. or PetSmart. No internet. Dan Hoffmann had opened his 800 square-foot store, an exotic pet store in Concord on March 3, 1980. He was 22, married, a high school graduate, with no business training, and a lot of passion, especially towards reptiles.
He scrounged together $3,000; $1,000 in savings, $1,000 loan from his father, and $1,000 borrowed from a credit union. He opened in what used to be the Sugar Plum Bakery building located at 2359 Concord Blvd.
The store is still operating, 38 years later, making it one of Concord’s longest surviving businesses.
Being a new owner of a bearded dragon, I thought I would research the exotic/reptile pet lovin’ world for this article. Dan has been interviewed by a variety of publications over the years. Some of the information contained in this article is derived from those articles. I met up with Dan at the shop. The first reptile I noticed was an (yellow) albino rattlesnake.
Dan greeted me by showing me some of the more exotic larger attractions in the shop: A Tegu (photo right) , two Rhino Iguanas (photo below), and an albino Burmese python (which he has two). As he let each out of their vivariums, one father in the store felt the need to grab his son. Why take chances, right? 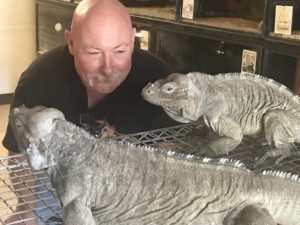 However, as intimidating as they look, these animals were docile yet fascinating to watch. I asked Dan how long he had been interested in reptiles.
“When I was 7 years old, a kid sold me a dead tortoise for ten cents. He told me it was just hibernating. So, I called Lindsey Museum and they told me to soak it in warm water to wake it up. The whole experience of trying to jump-start a tortoise was well worth the ten cents,” Dan recalled. “That created my passion for reptiles and amphibians.” Dan grew up in Concord playing in the creeks catching tadpoles, toads, and frogs. “I opened the store with a handful of reptiles, one being a large iguana that became a store fixture, a mascot.”
At the time, Dan and his wife, Joyce, were bird owners. They had no idea how to run a business. All they had was a passion for animals and no choice but to succeed. Failure meant financial ruin. “We knew nothing about demographics, competition, target market, purchasing animals or budget,” Dan says. “We just kept reinvesting in ourselves.”
As an exotic store, they sold raccoons, crocodilians, exotic birds, rabbits, dogs, cats, reptiles and amphibians. “I could be seen around town on my motorcycle with my Sheltie dog’s head poking out of my jacket and our raccoon on the seat behind me holding onto my waist (with a leash and harness, of course [and before laws prohibited owning one]). I would give out our business card to curious people at traffic lights!” 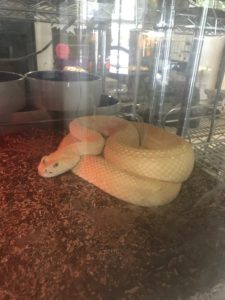 But after two years, we went to just reptiles and amphibians. “The birds were too noisy and messy. We couldn’t hear our customers on the phone. So, they were the first to go. Puppies sold well for a while, but when they didn’t sell they would grow up and that became a problem. Then raccoons became illegal.”
Today there are no other pet stores in Concord. The last recession almost caused him to close as well. “I was already clearing out the back room, but we survived by the grace of God and determination.”
Hoffmann’s Reptile has expanded to 1,700 square feet. When you walk in the door you can find everything you need to keep your herps healthy. Feeder insects, caging, lights and substrate are just for starters. If you are not sure what your new reptile will need, the Hoffmann’s are more than happy to help.
“We have designed vivariums we call reprite cages, a wooden enclosure with glass front. It’s designed to hold in the heat and humidity for the reptiles,” Dan says. “We set up the cage for the individual pet. Set up includes all the equipment the animal needs. Just add the pet, take the enclosure home and plug it in. We offer cage cleaning for our cages, boarding and health checks. Our services go beyond your original purchase, for the life of the animal. We specialize in family-friendly reptiles. These are creatures with feelings and needs. They should be given the best care and caging, not the cheapest you can get away with! The environment makes or breaks the animal.”
The more popular sellers are the bearded dragons and ball pythons which are sold as hatchlings at 12”to 14”. They grow up to 5 feet. Unlike the Burmese python, which can get up to 30 feet. You can still find exotic frogs, geckos, turtles, and pet rabbits there.
“We’ve been told we’re better than going to the zoo!”
The business has changed over the years. The internet caused the store to change from primarily selling pets to selling food, feeder rodents, and crickets. They sell over 10,000 crickets each week, which is down from a peak of 18,000 before the recession.
Running the business had its tribulations and its rewards for the Hoffmanns. Dan says he’s had a few notable celebrities come into his store, such as Eddie Money, Tony La Russa, and Concord’s Mr. Jacuzzi. “I mentored a lot of kids through the years. Two, in particular, Brian and Chris Hansbrow worked for me for 10 years in the store. They started originally to pay for some turtle equipment. Eventually, they moved to Utah and now run an online store called geckodaddy.com.” Dan says they sell $50,000 annually of exotic frogs and geckos, and that’s not their job. They still work full-time jobs. “We still stay in touch and visit. I regard them as my own kids.”
Dan also mentored one kid, Doug, who now designs secret weapons for the military at Sandia National Laboratory, near Livermore. I can’t imagine what that would be. ..perhaps, geckos with friggin’ laser beams attached to their heads. 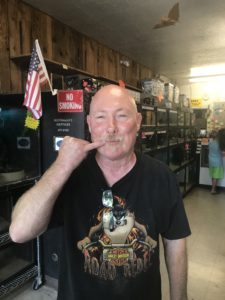