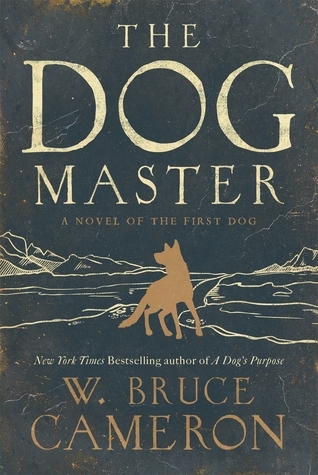 The Dog Master: A Novel of the First Dog (2016, Forge Books, paperback, 416 pages, $12.20) by Bruce W. Cameron is as much about early human survival as it is the evolution of the dog species.  Cameron summarizes his book as follows: “At the dawn of the last Ice Age, our species was in danger of extinction, threatened by starvation, by vicious predators, and competing for scarce resources with another humanoid—the Neanderthal, who were stronger and faster and had bigger brains.  Yet it is mankind that prevailed—and I believe it was all because we made partners of our former mortal enemies, the wolves.”

The focus of the novel is on the Kindred and Wolfen clans, but the fierce Cohorts who paint their faces black, the timid Frightened loners, and the placid Blanc people contribute to the storyline.  Within the Kindred tribe, Mal, a young man with a malformed leg, and his brother, Dog, the inspiration for the tamed wolf’s name, and their mother, Calli, are key to the story.  The tapestry of supporting Kindred characters include the beautiful Bellu, Urs, the Kindred Hunt Master, Grat, a young bully, Albi, the power-hungry and punitive council mother, and her hapless son, Palloc.  Within the Wolfen, the romance between the clan leader, Silex, and Fia sizzles.  But after unfortunate events, Silex is forced to marry his lackluster sister, Ovi.

Cameron creates a world where the quest for food forms the basis for social structure. As might be expected, men are meat hunters, while women and children tend the fire and gather nuts and berries. The Kindred tribes survival strategy is to establish a summer and winter base camp, while the Wolfen are nomadic but settle into gathering sites, following game and modeling their behavior after wolves.

Fans of Jean M. Auel’s Clan of the Cave Bear series will enjoy this book. From a tense lion-hunting scene and violent encounters with the Cohort, to the myriad of romantic relationships, to the mystery as to how a man ends up living in a cave with an injured wolf and her pups, this novel is a page-turner.  It is bound to resonate with readers beyond the typical lover of dog books.

Bruce W. Cameron’s most well-known dog-related book is the New York Times and USA Today bestseller: A Dog’s Purpose.  His NYT bestseller, 8 Simple Rules for Dating My Teenage Daughter, was turned into an ABC series in 2002.