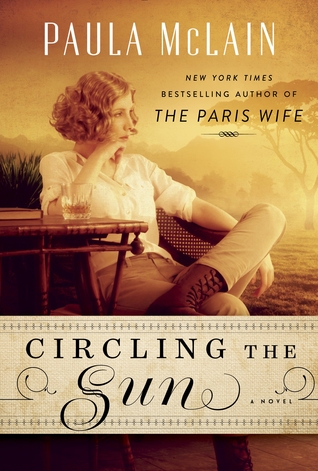 Circling the Sun (2015, Random House LLC, hardcover, $17.03, 385 pages) by Paula McClain has been a New York Times Bestseller and voted One Of The Best Books of the Year By NPR, Bookpage, and Shelf Awareness for good reason.  This historical novel chronicles the life of Beryl Markham, the first woman pilot to cross the Atlantic solo from east to west in 1936.

Set in a remote region of British East Africa (now Kenya), Beryl’s nontraditional upbringing in an exotic land is fodder for a great tale and McClain delivers.  The prologue launches with Markham during her daring plane journey across the Atlantic, but then McClain returns to Beryl’s childhood, her miserable marriage as a teen bride, then her accomplishments and the challenges of being a woman and a horse trainer.  The subject of her piloting career doesn’t resurface until Chapter 58. While piloting may have been Beryl’s primary life achievement, McClain investigates a deeper subject—what set of circumstances, what upbringing, what fundamental personality was necessary for a woman to have the opportunity to have a career in the 1930s?  Was it a harrowing attack by a lion as a child?  Being abandoned by her mother who kept her brother, but not her?  Was it a permissive father who let her drop out of school at a young age? Or was her drive to push through social norms there at birth?

McClain’s talent shines through the page.  It is revealed in her word choices, her ability to paint the African landscape in a reader’s mind and to capture the essence of a person’s personality through dialogue and action. Beryl’s life was far from easy; she loved and lost many times over, but she was a risk taker and McClain depicts her in a way that Beryl Markham’s accomplishment will not soon be forgotten.

Circling the Sun recounts the remarkable life of an unstoppable woman who plowed her way through the barriers of a good-old-boy world in an era when women were expected to be small. If you also want to learn more about Beryl’s piloting adventures, follow up by reading Beryl’s own memoir: West with the Night.