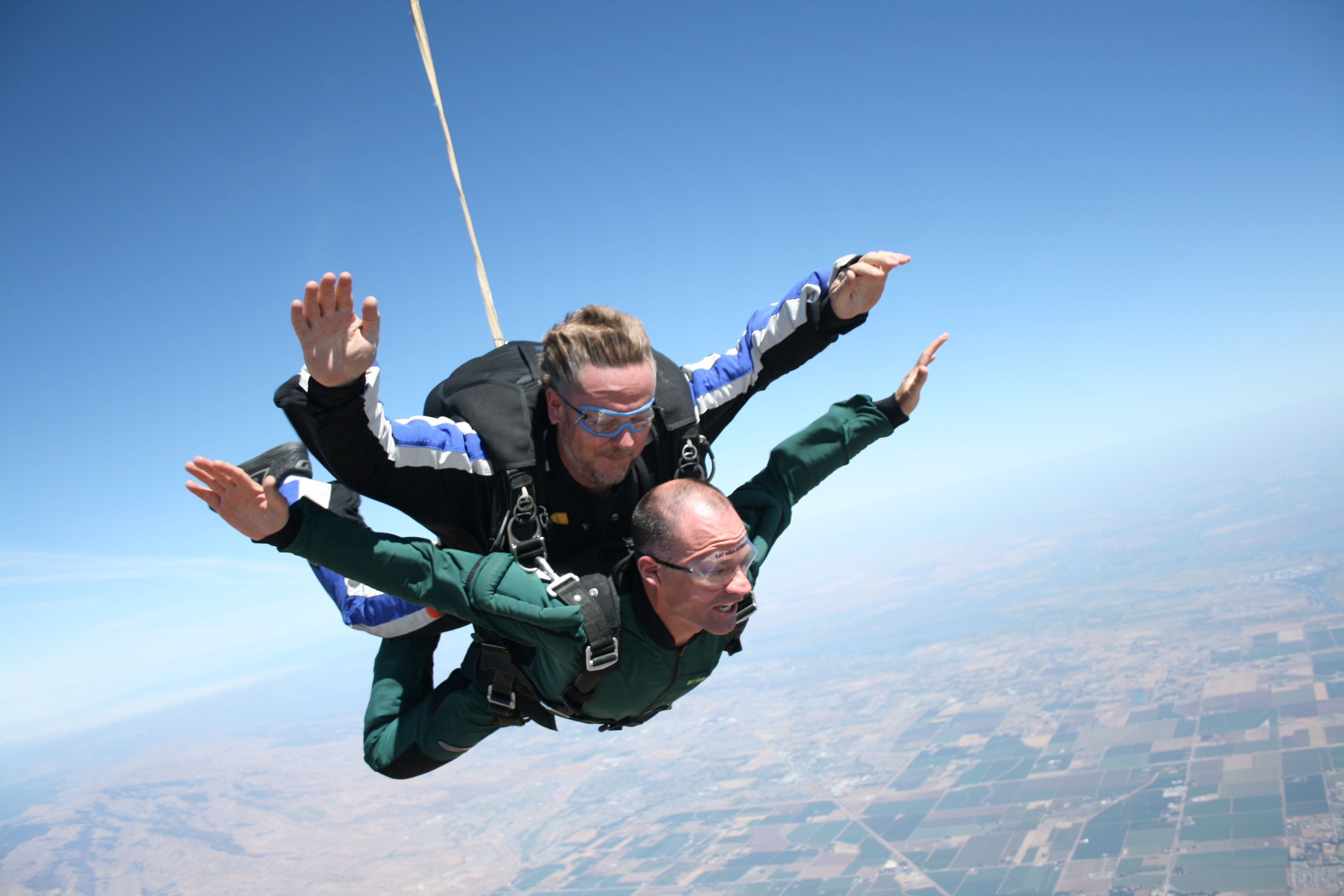 I’ve always loved this time of year, not so much for the holidays, but because it’s a great time for reflection; it’s a chance to look back and evaluate what you achieved over the past year and where you fell short. The approaching New Year offers a time of renewal, setting goals and making New Year’s resolutions.

Sure I could have included sailing single-handedly to Hawaii, or riding a bike across the United States, but those goals seemed so daunting, and not realistic. Then it dawned on me, why not go skydiving? I’ve always been interested in skydiving, but the right opportunity had not yet presented itself. So the matter was settled, skydiving was now on my bucket list….for someday.

Early one Friday morning, a song came over the radio; it was “Live Like You Were Dying” by Tim McGraw. I loved the song’s lyrics, which in part went like this: “I was in my early forties, with a lot of life before me, and a moment came that stopped me on a dime…when it sank in that this might really be the real end, how’s it hit you when you get that kind of news.  Man, whatcha do?”

And then the chorus continued with “I went skydiving, I went Rocky Mountain climbing, I went 2.7 seconds on a bull named Fu Manchu. And I loved deeper, and I spoke sweeter, and I gave forgiveness I’d been denying…someday I hope you get the chance to live like you were dying.” I’ve heard the song before, but it meant something different that Friday morning, and acting completely on impulse, I decided that that was the day to go skydiving.

e east side of Mt. Diablo, it was a convenient location. So off I went, not to jump, but to find out more about it, pick up a brochure, etc.   Then the flight instructor introduced himself and basically said “Why not do it now.”

After filling out the customary disclaimer forms, watching a short video on basic protocol, and getting fitted for a fligh

t suit and harness, we began to board the small plane. It wasn’t until the engine roared to life and the pilot announced our departure that it really sank in; that it was actually happening.

We slowly climbed to an altitude of 13,000 feet and made our preparations to jump. I began second-guessing my decision.   What if my parachute doesn’t open? What if I freeze and forget to pull the rip cord? And why is “RIP” even mentioned before the word cord? There’s only one other meaning of those letters “R.I.P.” that I was familiar with and I didn’t like the idea of it being connected to my cord.  Less than 1% of the estimated 2 million jumps a year end in tragedy, and since I’ve largely been a lucky guy most of my life, I thought for sure I would fall with the other 99%.

There’s something fundamentally wrong with jumping out of a perfectly functioning airplane, I thought as I slowly inched my way toward the open door.  The instructor gave me a thumbs-up, and before I could protest, out the door I went.

With wind in my face, a lump in my throat, and terror in my eyes, I was free falling.  Although Mt. Diablo provided a spectacular backdrop, it was not the view I was concerned with that day. There was something about falling at 125 mph towards the earth that kept me focused on the task at hand.

Without much fanfare the shoot opened, and for the first time, while suspended in mid-air, I viewed all the green and brown landscape below. It was a remarkable sight.  I could no long tell I was descending until it was time to land.  It was a rough landing that day, not like the ones you see at an air show or at a professional sporting event. Mine was more akin to tripping and falling over a gopher hole, or maybe like falling down a flight of stairs, but it was a successful landing nonetheless.

For the day, I was not Alan Eustace, the Google executive who jumped from space at 135,890 feet high, nor was I falling at 822 mph in a specially designed and pressurized spacesuit as he did, but I was a guy checking off another bucket list item, and there was no other place I wanted to be that day.

I must confess, that in terms of New Year’s resolutions, it was much more exciting than committing to a weight loss routine or deciding to join a gym. Skydiving was terrifying and exhilarating, and everything I had hoped for, but once was enough for me.  My bucket list has far too many open items and time is wasting.

So what’s your New Year’s resolution going to be?