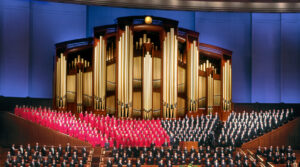 Jack Bethards has built and maintained some of the world’s most infamous and largest pipe organs.
Bethards lives in Pleasant Hill, a Bay Area native and originally from Santa Rosa. He holds both a Bachelor’ and Masters’ degree in Music from UC Berkeley. As a young man, he became a professional musician working with various groups and bands, at the Santa Rosa symphony orchestra and later as manager of the Oakland symphony. As a child growing up he was always musically inclined, played in the school band, and became fascinated with organs, big ones, after watching an old 8mm movie on their history and construction. In between playing trumpet with his friends on weekend gigs and going to school, he repaired and fixed a broken Wurlitzer organ in the local Santa Rosa theater. He asked the manager if he could work on it and after at first refusing, the manager finally agreed. Bethards took books from the library, studied the mechanics, and fixed it. He was in Junior High at the time!

As this short, bespectacled, energetic man, his face in a constant smile, gave me a tour of his factory in Benicia, his passion was evident. We were standing in front of an almost finished massive organ with its 3,000 pipes towering up almost fifty feet. “I have built even bigger ones than this,” he said nonchalantly. “This is going to a church in Texas. It will take us a week to disassemble it. We’ll ship it and then my team will go there and rebuild it on the site. And that could take us about a month.” I could see the craftsmanship but also hear the pride in every word.
Bethards is the owner of Schoenstein & Company, the oldest and largest organ factory in the Western states. It has been building organs for five generations and started in the Black Forrest of Germany in the mid-19th century and in 1877 came to San Francisco. Bethards wanted to buy the corporation in 1976 but while the owners while willing, asked that he wait one year, they wanted to celebrate their centenary! He became the owner the following year.
He is the past president of the Pipe Organ Builders of America, a member of the International Society of Organ Builders, and serves on the advisory boards of several organ preservation societies. He is in constant demand as a lecturer and speaker and regularly contributes articles to professional journals. He is an expert concerning Romantic organ building in France, Germany, England, and the USA.
His company with eighteen employees, not only custom designs pipe organs, but they also do restoration, maintenance, and refurbishing. Among his clients are the Kennedy Center in New York, the National Shrine in Washington DC (the largest church in North America), the Smithsonian Institute, and the symphony orchestras of Boston and Cleveland. They designed and built the organ for the Julliard School of Music in New York, Melbourne Town Hall in Australia, and Newcastle Town Hall in England. More locally they maintain organs at the Legion of Honor, Grace Cathedral, and the San Francisco symphony.
Seen by millions of people all over the world, Bethards’ company maintains the famous pipe organ in the Mormon Tabernacle in Utah. In 2003 they designed and built the organ for the Mormon Conference Center which can accommodate 21,000 people and from which the 350 voice Tabernacle Choir gives their Christmas Concerts. The organ has over 7,000 pipes—some of them among the largest in existence.
And this man is your neighbor!