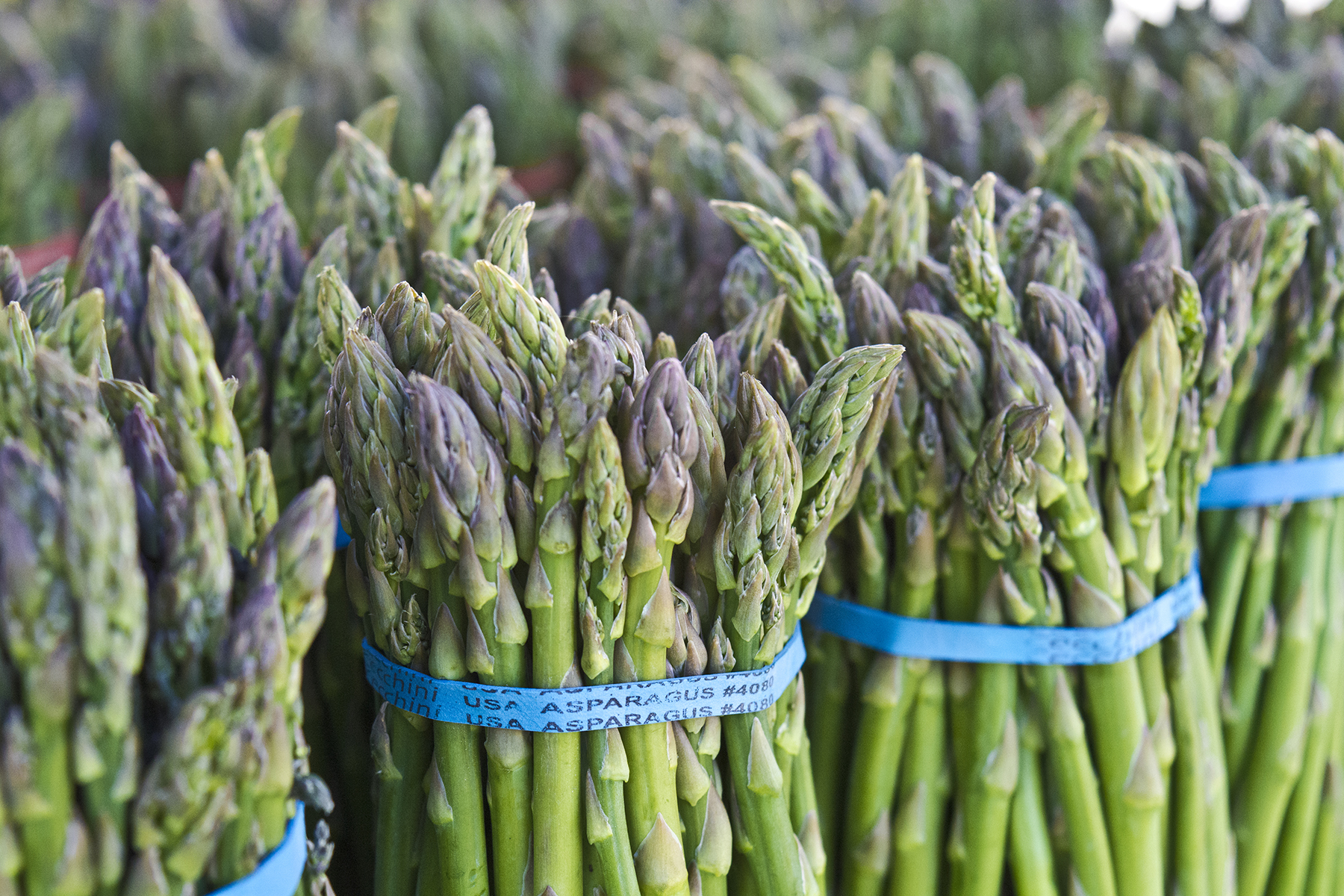 A lovely plate of fresh steamed or roasted asparagus is something we look forward to each spring in California. Once called “The King of Vegetables,” the local fields of Delta asparagus have become harder and harder to find. Thousands of acres of asparagus used to cover the Stockton-Brentwood area in soft green spears every spring, but urban sprawl and other crops have stealthily replaced them.
In the last 20 years, California’s asparagus acreage has plummeted. At the turn of the 21st century, California growers were farming over 36,000 acres of asparagus. In 1995, Contra Costa County harvested 20,000 acres of asparagus. In 2017, that figure dropped to a mere 1,300 acres*. Another way to look at it is that California growers harvested 58 million pounds of fresh asparagus in 2007 on 20,000 acres. That fell to just over 20 million pounds of production from 8,000 acres in 2016, according to the California Department of Food and Agriculture. Acreage is even less now.
It is said that the crop has declined so drastically because imports have made it almost impossible for local farmers to financially compete. Even the California Asparagus Commission has suspended its operations.
This decrease in acreage began with the North American Free Trade Agreement (NAFTA) that took effect in 1994. Until that time, growers were able to get a premium for their high-quality California asparagus. With NAFTA in place, the difference between California’s labor costs and its strict safety regulations, and those of Mexico’s for producing the asparagus have had a major impact. (NAFTA was replaced in 2019 by the U.S.-Mexico-Canada Agreement and has continued to exacerbate the problem.)
“Asparagus is a labor-intensive crop, and it’s hard to be competitive,” says Barbara Cecchini of what was once Cecchini & Cecchini Farms in Brentwood. “Perfectly good Delta asparagus is getting chopped-up and tilled under.” The Cecchini family has grown asparagus since the 1930s but sold the land and moved their operation to Urban Edge Farm.
Another local asparagus grower, Roscoe Zuckerman of Zuckerman Farms in Stockton, relies heavily on direct-to-consumer farmers’ market to sell his product. Local farmers’ markets, CSAs, and restaurants make up over half his business. He says, “It’s the only way we have of breaking even. They give us the opportunity to communicate the freshness of a local-grown product that is harvested the day before market, compared to asparagus that has traveled thousands of miles and is a week old before it hits market shelves.” Once asparagus is cut, the sugars begin to break down and the flavor becomes starchy. That is why it is important to get freshly cut asparagus from your local farmer.
Added to the increased costs of producing it, asparagus produce for nine years and require, on average, nearly 260 gallons of water per pound. With an almost constant drought in California for several years, Delta asparagus has become even more costly to grow. There are truly little, or no ground water reserves from which to pull. Under the state’s new Groundwater Management Act, agriculture is required to adhere to strict “sustainability plan” guidelines for pumping in dry years.
Growers of California asparagus have had to become more conscious of their production and growing methods to be even remotely competitive. Growing and harvesting asparagus has had to become more efficient, even though it still must be hand-harvested, hand-sorted, and hand-packed. Water is cut back in the fall and winter to avoid the growth of asparagus fern production as it goes into dormancy. Farmers used to flood the fields in the spring which is not common anymore. The annual yield has become smaller as acreage is reduced.
One strong element that has California asparagus ahead of any other country is the state’s standards of production and food safety regulations, which are among the most stringent. Yes, you may pay more for California asparagus, but the superb quality, flavor, and safety of the state’s asparagus is a strong selling point.
Woody Guthrie once sang about “Pastures of Plenty” and we hope asparagus will spring back with increased awareness of its value to California agriculture and the local economy. Other compelling reasons to save dwindling asparagus acreage include supporting the farmers who still want to grow it and offering asparagus to customers who want to know where their food is grown and whether it is safe to eat.
There are no better climate or soil conditions, nor deep knowledge of growing asparagus than in California, so do not give up on California-grown asparagus just yet. Farmers still have difficult choices ahead, but as long as we continue to buy asparagus grown in California to support them, we may continue to see fields of asparagus growing in Contra Costa County, San Joaquin, Salinas, and other areas of the state for years to come.
Thank you for supporting your local asparagus growers where quality, freshness, and safety are unsurpassed. You will find the best California asparagus at your local farmers’ market!
*CA Asparagus Commission