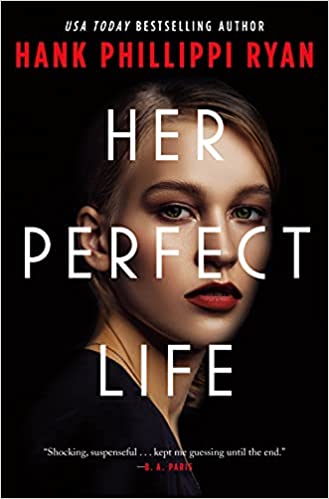 “Her Perfect Life” (Forge Books, 2021, hard cover, 336 pages $17.99) by Hank Phillippi Ryan is the story of a single mother who has it all. Lily Atwood has a successful career as a reporter, a beautiful home, and a happy, well-adjusted daughter named Rowen. Atwood’s celebrity life seems perfect on the outside and her assistant, Greer, is determined to maintain that image. The novel opens with Lily delivering an acceptance speech at an award’s ceremony and searching the audience for her anonymous source named Smith. She has no idea what the mysterious informant looks like, but Lily is aware that this person’s investigative tips account for her unprecedented success.

The narrative shifts between Lily, Cassie, Lily’s sister, and Greer. Cassie’s life took a miserable turn during her freshman year in college when her unfortunate infatuation with a professor put her life in danger as well as caused her to cross paths with a drug dealer. A series of bad decisions leaves Cassie with no choice but to disappear without disclosing her whereabouts to her family. Now, 20 years have passed, and Cassie wants to come home. But is it safe?

As the story progresses, Smith’s motivation for helping Atwood comes into question. In addition, Lily’s past is about to catch up with her. Her sister, Cassie, who disappeared when Lily was seven, has weighed on her and as much as she’s yearned for a reunion, she worries her imperfect life would be revealed if Cassie returned. When bouquets of lilies are delivered to Lily’s home with Cassie’s name on the gift card, Lily fears her public image is about to be shattered.
Meanwhile, Greer, who is envious of Lily’s celebrity, joins forces with Mr. Smith, an investigator with a knowledge of Cassie’s history and an interest in connecting Rowen with a father the little girl doesn’t even know exists. The twists and turns of the convoluted plot will keep readers guessing to the end. What exactly is Mr. Smith up to and what exactly happened to Cassie?

“Her Perfect Life” was a Publishers Weekly Pick of the Week, ranked by BookTrib and Crime Reads as a Most Anticipated Book, and rated by Goodreads as Biggest Mysteries/Thrillers of the Year. Fans of Lisa Unger, K.L. Slater, and A. J. Finn will appreciate the twists and turns of Ryan’s novel.

Ryan is a USA Today bestselling author. She has won five Agatha Awards in addition to Anthony, Macavity, Daphne du Maurier, and Mary Higgins Clark Awards. She is also an award-winning investigative reporter at Boston’s WHDH-TV earning 36 EMMYs and 14 Edward R. Murrow award. She has been a radio reporter, a legislative aide in the United States Senate, and an editorial assistant at Rolling Stone Magazine. Hank is a founding teacher at Mystery Writers of America University and has served as president of the National Sisters in Crime. Hank has written four novels in the Charlotte McNally series, five thrillers in the Jane Ryland/Jake Brogan series and three other stand-alone novels (Trust Me, The Murder List and The First to Lie). Follow her at HankPhillippiRyan.com.