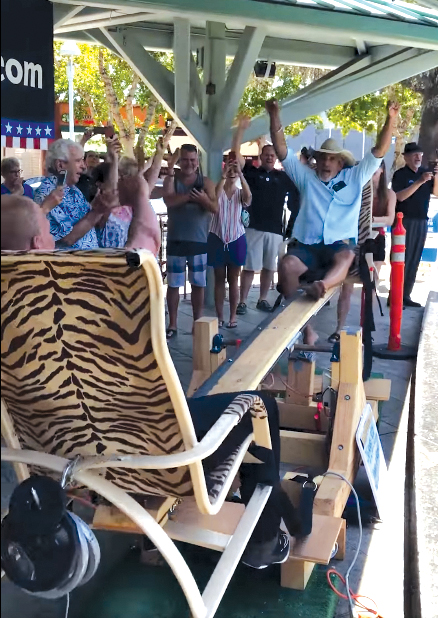 Congratulations to Chuck Walker, Concord, and Michael Hartshorn for setting a new Guinness World Record by teeter-tottering for nine days, July 1-July 10. That is 216 hours straight – long enough that they developed sea legs and struggled when walking on bathroom breaks.
The stunt took place on the stage at Todos Santos and was certainly popular on social media, and local media, but also garnered a smattering of national press for Concord.
The new record marked the 50th anniversary of the old record which Walker had set in 1971. His seesaw partner then, Stan Johnson, has since passed, so friend Hartshorn sat in for the challenge.
Walker had custom built this teeter-totter to include a counter, counterweights, and brakes. For bathroom breaks, they would ask for persons to sit in, which I volunteered to do for an entire two- to three-minute break.
Originally, Walker had targeted to go 10 days and 240 hours, but 10 minutes after breaking the record on the ninth day, they both agreed to claim the feat accomplished. As per the counter, the total teeter-totter count was 213,813.
They were grateful and appreciated all who showed up to support the final countdown to the record.

Whether it is Guinness Records, Olympic medals, a World Cup, or an Emmy nomination, I am always amazed at the output of achievers this area produces given what little population the county represents of the whole country.
Kudos to Melissa Seidemann, Walnut Creek, Maggie Steffens of Danville, Kara Kohler of Clayton, Ruth Winder, Lafayette; to Grandmaster Sam Shankland, Walnut Creek competing in FIDE World Cup Chess Tournament in Sochi, Russia; and Sarah Williams, Clayton (Emmy nomination), – I applaud you all.

Downtown Concord appears to be getting back to its robust self. EJ Phair is being remodeled and will reopen. All the empty storefronts on Salvio Street are leased out and going through the permit process and improvements. Coming are: Serenity Nail Salon (Formerly Post Net),Aung Burma (Formerly Leisure Desserts & T4), Beard Papa’s (Formerly Loard’s Ice Cream), Teaspoon (Formerly Poke Salad), and Uncle Jay’s Burgers (Formerly Hot Dog Palace) according to Councilmember Edi Birsan’s Facebook page.

Speaking of the council, they have an unenviable duty coming up this month to interview three developers to complete the Naval Weapons Station Development. According to Mercury News, those bidding are Concord-based Seeno Companies including Seeno, Discovery Builders, Inc., Lewis Group of Companies and California Capital Investment Group in a joint application; City Ventures, an Irvine-based multi-national group; and Brookfield Development, another multi-national group.
On page 7, Birsan offers an overview of what is in consideration during this process. The stakes are huge, and this is no doubt going to get volatile, but at least it is moving forward.