Mount Diablo Beekeepers Association is all about the bees 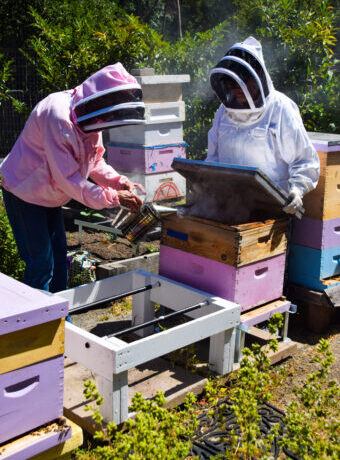 Anyone can become a beekeeper, but it is critical for beginners to find mentors and understand the intricacies of bee behavior.
This is precisely the role of Mount Diablo Beekeepers Association (MDBA). Founded in 2014, MDBA is dedicated to teaching newbies the complex art of beekeeping
One of the most surprising things I learned upon meeting Jan Spieth, the current president of Mount Diablo Beekeepers Association (MDBA) and Jaci Kildare, their newsletter editor and communications specialist, was neither of them became beekeepers for the honey.

In fact, Spieth never really enjoyed eating store-bought honey, though she has now come to appreciate the golden nectar her hives produce.

Kildare often gifts her honey to friends and family because there is usually plenty. A single hive box can generate up to 75 pounds of honey, though beekeepers usually leave up to seven frames across the boxes in their hive so the bees can sustain the hive through the winter.
Knowledge of bees’ social structure and behavior is crucial for successful hive management and both Spieth and Kildare have found MDBA to be invaluable.

MDBA educates the public in the crucial role of bees in food production and tries to alleviate their fear of the insect through outreach. They also perform community service by assisting with swarm removal.
Spieth became a beekeeper back in 2007 because of a wine barrel.
“I was adopted by a swarm of bees,” Spieth says. “It was March, and I couldn’t understand why there were so many bees when it was shady, and there were no flowers. Then I discovered that a swarm had found my wine barrel, the perfect environment if you are a honeybee.”
Because her first attempt at beekeeping did not go so well, her bees are now housed in traditional beehive boxes.
“I was so ignorant,” she says. “Some people go into beekeeping completely naïve, thinking it is simple, and I was one of those. They died. I felt so remorseful that I joined the Beekeepers Association.”
She has found the organization of about 450 members to be filled with kind, generous and smart people who live in Contra Costa County. Their mission is to promote beekeeping while educating the public about the vital role of bees in our environment.
Kildare’s journey into the fascinating world of bees was more intentional. “I wanted to get into beekeeping about 15 years ago, but it just wasn’t the right time. And then a couple of years ago, I decided that now was the time.”
Kildare’s sister introduced her to an MDBA member. She joined and met a woman there who took her along to inspect her various hives.

“Then one day, I get a call about a swarm in Clayton,” says Kildare. “I was told these could be your bees. And it was really fortuitous, because a couple of weeks earlier I had driven up to Woodland where there’s a supply house, and I had gotten everything for a hive. It was really great!” she grinned.
That is one of the community services MDBA provides, the humane removal of swarms. Several members volunteer to trap the bees. Swarm season is typically March through June.
Prior to the swarm behavior, the worker bees choose larvae to become queens, bathe them in royal jelly and then create special, elongated ‘queen cells’ for them. These supersedure cells have a mottled surface and form the shape of a peanut shell. The worker bees will also put the old queen on a diet, so she is able to fly, and ready her for departure. As these changes occur in the hive, scout bees will explore the area for a new home for the old queen.
“If a colony gets too crowded, the old queen and approximately 40% of the hive will leave,” says Spieth.
Spieth describes the swarming bees as only focused on finding a home. Swarms are not typically aggressive. If a swarm becomes a nuisance to a business or a residence, she recommends visiting the MDBA website and finding a volunteer to come get them.

The volunteer, who has been a MDBA member for a minimum of two years, will ask about the size of the hive, and how long it has been there. Usually, the swarm is collected in the afternoon or evening when the scouts will have returned to the cluster.
Bee collection from a swarm that inhabits a tree trunk is far more difficult to capture. Sometimes a vacuum cleaner is used. Getting the queen is essential. If the bees are hanging from a branch, the process is relatively easy. Kildare’s swarm was in this type of formation.
“A painter’s 5-gallon bucket on a long pole was placed under the bees, and when they were bumped, they automatically dropped. Like boom-boom,” Kildare says of the process. The captured bees are typically given to a MDBA member who wants to start a hive, like Kildare, or someone who wants to expand their population. There is no fee to the caller, but a donation to the organization is requested.
“There’s a whole learning process,” says Kildare. “Everything looks the same when you first start. I have learned the bees can tell that I’m stressed. If I’m relaxed, I can go into the hive with no gloves on. I know what my emotional state is by what kind of gloves I have to wear.”
During the pandemic, Kildare became focused on planting her garden for pollination. A lot more native bees, such as bumblebees, now visit her yard. Most flowers pollinated by bees are yellow, violet, or blue. They also often have ultraviolet markings. White flowers also attract bees, possibly because bees see the flowers as blue-green rather than white. Some bee-friendly plants include lavender, rosemary, an annual herb called borage, as well as plants in the aster, pea, and mint families.

“One out of every three bites of human food is the direct result of honeybee pollination.” Spieth explains. “California’s almond industry, an important part of the State’s economy, is 100% pollinated by bees.”
Both women showed a deep appreciation for the complexity of a bee’s society. Each bee has a specific role, and their jobs define their lifespan. Unlike worker bees that can expect to live six weeks, queens can live up to three years. The queen will specify gender in the larvae she produces, and as winter approaches, she stops laying drones (male bees).
Drones leave the hive in late fall to form a drone congregation area. All drones from all the hives in the neighborhood will fly up into the sky around 10 or 11 in the morning waiting for a virgin queen to pass by. If she does not show, they return to their respective hives in the late afternoon and start the process again the next morning. A new queen will mate once in her lifetime with nine to 13 drones over the course of a few days.

“The most interesting aspect of bee behavior is in all the different ways that they communicate to one another,” says Kildare. Last summer she observed ‘washboarding”. “They were all up on the box, about 300 bees with their heads pointed down and they were going down and going up. Going down, going up. It happened for at least 10 minutes.” She laughs and describes it as a bee’s version of a flash mob. “Researchers still don’t know the purpose. It was the most fascinating thing I’ve ever observed in my life.”
Spieth is also interested in hive behavior. “Each type of bee gives off pheromones,” she explains. “These chemicals can spark action, or reaction or direction.”
MDBA is actively involved in community education and will bring an observation hive (encased in glass) to classrooms or to special events at local venues, such as the John Muir House. Usually, these events are successful in engaging even the most frightened children and adults.
“Something changes when they can just look and watch and see,” Spieth says. “Once we tell them that they are herbivores, and will never be attracted to your hamburger, the wall of fear comes down.”
Spieth opened several of her hive boxes and manipulated the frames with her bare hands without being stung. Though both women have experienced the occasional sting while checking or caring for their hives, both report when they are calm and move slowly, the bees are not bothered by their presence.
She emphasized that honeybees have no interest in stinging you. It is a suicide mission for them because when they plant their stinger, they die.

Honeybees prefer to bump you as a warning to back off, usually because they fear for their queen’s safety. If you stand still, the pheromone will dissipate, and the threat of getting stung goes away. But if they perceive you are a danger, they are very protective of their mistress, and will die for her.

Most honeybee stings come from being stepped on in the grass or being swatted at. If a bee lands on you, the best thing for you to do is to freeze like a statute. Swatting at a bee, not only aggravates it, but it might send off a pheromone to invite other bees to join it in attacking what it perceives as a threat.
“I have a fascination for the insect itself,” Spieth explains of her interest in bees. “99.9% are female. Watching them is very serene and Zen-like. And when you know what they’re doing inside, it’s pretty remarkable.”
Kildare also described her experience as a hobbyist as Zen-like. Watching the women work around the hives, surrounded by the hum of industrious bees with absolutely no interest in me, really was strangely calming.
To learn more about MDBA, a 501(3)c nonprofit organization, and their events and services, visit www.diablobees.org.

[Jill Hedgecock has a Master’s degree in Environmental Management and is the author of the award-winning “Rhino in the Room,” a novel inspired by her interest in helping endangered animals.]