San Ramon nurse appears on “Who Wants to Be a Millionaire!” 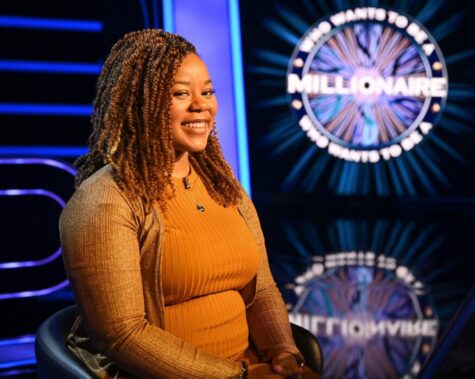 DeShae Alcorn, RN, BSN, and an ICU nurse at San Ramon Regional Medical Center, appeared on ABC’s “Who Wants to Be a Millionaire!” on Sunday March 7. This season, the show is featuring frontline heroes along with celebrity contestants playing for charity. Networks require complete secrecy of its contestants. So until it airs, Alcorn was not allowed to reveal her success or failure.
“It’s definitely very hard keeping it a secret. I just remind those who ask, if I say anything I won’t get paid and most people left it at that! No one was more inquisitive than my mom though,” Alcorn said.
Secret or not, we did coax a few comments from her beforehand.
“It honestly felt surreal and still is surreal that I was on a national television show I grew up watching. I was in awe looking around the studio. I was extremely humbled and honored to be there!” Alcorn exclaimed.
Alcorn had initially applied for a game show where you competed to remove student loan debt. But she received a call in July 2020 saying they were no longer doing that show and asked her if she was interested in being a contestant on “Who Wants to be a Millionaire” hosted by Jimmy Kimmel. She said yes without hesitation.

The process involved a number of pre-screening forms, quizzes, phone and video interviews, but she says it was all worth it.
As for her lifeline, “I was able to bring the smartest person I know to help with some of the questions, so I brought my dad along.” They drove down to Culver City in August 2020 for the taping of the show.
“Overall, I would say my experience was one of enjoyment. We will always experience losses but as long as you do your best and inspire someone to do the same, you’ll always be a winner.”
Alcorn won $32,000. Congratulations.