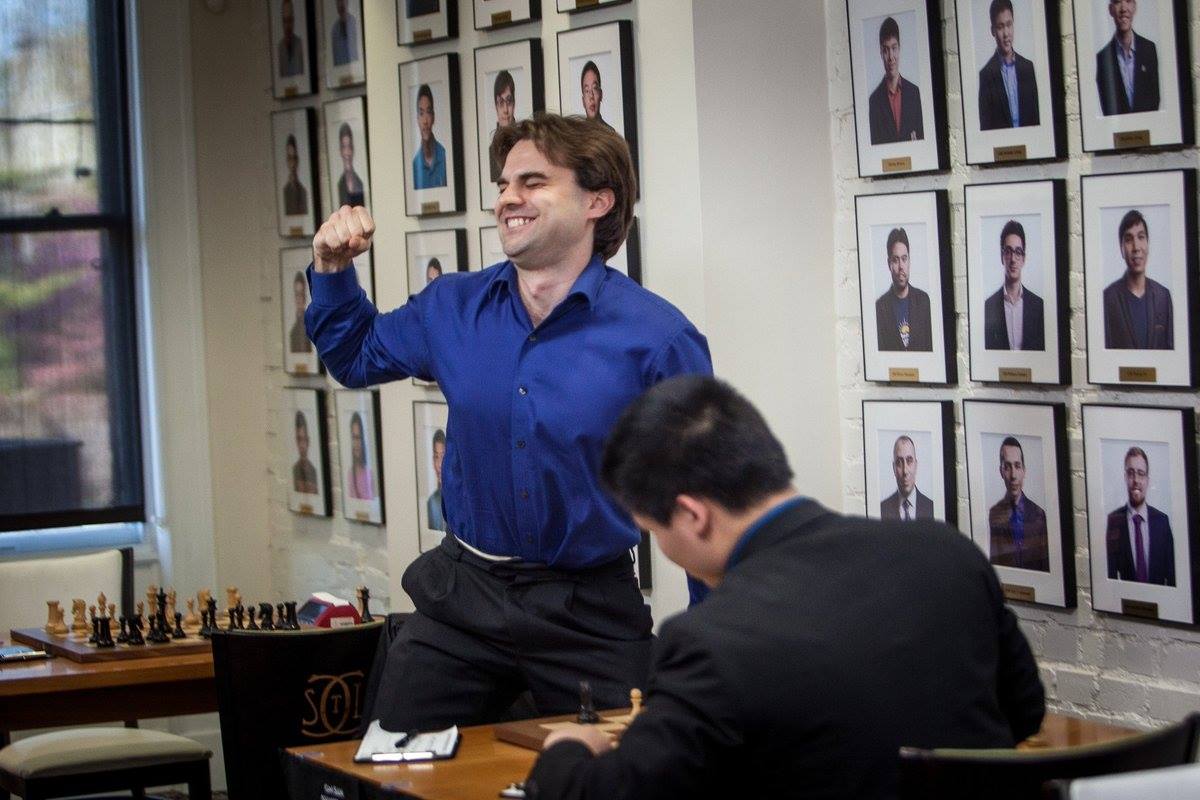 For many, Netflix’s hit series, “The Queen’s Gambit” may be their first exposure to chess. According to CNN, a record 62 million households watched ”The Queen’s Gambit” during the first month. The show has revitalized interest in the game.

At its core, chess is 32 game pieces on a 64-square board. The object of the game is to checkmate your opponent by attacking their king while it has no legal escape. Simple, right? Not quite. The strategies for defensive versus offensive play border on infinite.
The best chess players are rated as Grandmasters. As indicated in the movie, the game is dominated by European players, especially Russian Grandmasters.

What you probably did not know, there are two Masters of note, locally. Sam Shankland of Walnut Creek and a young prodigy and International Master, Christopher Yoo, 14, of Dublin.

Sam Shankland is an American Grandmaster and the current US Chess Champion. He is a mainstay on the US Olympic Team, a two-time Olympiad Gold Medalist (2014 and 2016), a former World U-18 co-champion (2008), and the winner of several international events. He has worked as an analyst for the reigning World Champion, Magnus Carlsen.
So how accurate is “The Queen’s Gambit” from a Grandmaster’s point of view?
Says Shankland of the show, “They definitely take some creative liberties with the actual gameplay, but ”The Queen’s Gambit” does a very good job of showing the kinds of struggles a lot of chess players face, and what the lifestyle of a professional player is like.”
According to Shankland, chess is the kind of game where beginning to compete in tournaments at age eleven is a late start for elite players; most begin their training as 4-year-olds and many drop out of school at an incredibly young age to study chess fulltime. Sam Shankland’s father taught him to move the pieces when he was 6, but an afterschool class from the Berkeley Chess School in fourth grade incited his passion for chess.

“I only believed I had what it took to be a Grandmaster when I won the 2008 California State Championship at 16, the youngest ever winner at the time,” says Shankland. In his storied career, he achieved California State Champion in 2008, 2009, 2011 and 2012.
Shankland certainly did not let his delay out of the starting gate trip him up. He achieved his grandmaster title at age 19. Once he became an adult, graduated college, and was able to devote himself fully to the game, he reached the same kinds of heights that the prodigies did, even though it took him a little longer. He is happy that his parent’s didn’t pull him out of school and he doesn’t necessarily believe this would have made him a better player. Having a balanced life is important.
“I’m definitely a better person as a result of my experience as a chess player,” says Shankland. “These same traits that can make a person really unpleasant (extreme intensity, an enormously powerful drive to succeed, a hyper-competitive and aggressive nature) really show in the way I approach the game, but (hopefully!) less so in my relations with other people.
“The biggest beginner mistakes I see are moving too quickly, not playing for the enjoyment of the game,” says Shankland, “and expecting it to be easy to improve. Much like any other sport, the people who excel the most in chess tend to be those with an extremely competitive nature and who are naturally aggressive. Chess can often make them better people as they can channel these generally negative qualities into something positive.”
FIDE is Federation International des Echecs, or the International Chess Federation. The cutoff to earn respect would vary widely from person to person. According to Shankland, you would need to rated at about 2200 to be the best player in a local chess club.

“In order to be a Grandmaster,” explains Shankland, “you have to earn a rating of at least 2500 and have three extremely good international tournament results with a performance rating over 2600. It is an elite title, but not as much as it used to be. Today, there are over 1500 Grandmasters in the world. The unofficial ”Super Grandmaster” title would describe those who have broken 2700 in their lives, of which there have only been 121 throughout the history of chess.” Shankland is one of these Super Grandmasters.

When he won the U.S. Chess Championship in 2018, he simultaneously breached the 2700 barrier for the first time in his career. His current FIDE is 2731.In “The Queen’s Gambit,” Harmon only takes on a trainer when she signs up to play in Paris. But training with Grandmaster’s is an important element for professional chess players.
“I’ve traveled to 52 countries as a professional player,” says Shankland, “and learned a lot from all the people I have met from all over the world. Before COVID hit, I frequently had other elite Grandmasters coming to California from Europe and Asia to train with me, including practice games, for a week or two, and I would go there as well, easily setting up five to six such sessions per year. For example, the last thing I did before the lockdown was fly to Berlin where I trained with two other Grandmasters for a week. I then took the train to Prague, played the Prague Masters (I tied for first), and then flew home.”

Shankland’s record as an American Chess Grandmaster and two-time Olympic Gold Medalist is in a class of its own. He has written and published instructional books and videos on various aspects of the game. He just completed and released part 3 of “Lifetime Repertoires: 1.d4”, (the notation for the first move of Queen’s Gambit opening). the trilogy can be purchased at www.chessable.com
Shankland is also a coach and personal trainer.
It’s no coincidence that Shankland coaches another local chess master, Christopher Yoo, from Dublin, CA.
In “the Queens’s gambit, Harmon was a child prodigy. Yoo, now 14, also a prodigy, has been sensational. Yoo became the youngest International Master in US history in January 2019 as well as the youngest player to ever beat a Super Grandmaster, feats that landed him on the cover of Chess Magazine.

Yoo learned chess at age 6. He was put in an after-school programs run by Berkeley chess group. “At first it was a struggle for him,” according to his father, Young-Kyu Yoo. “He was the last student to learn how the pieces move. So, the teachers didn’t pay much attention to him. But by the end of the class, he was beating his teachers.” Within 4 months, he became the California 1st Grade State

Champion.”Yoo became the youngest California State Champion at age 11, competing against adults. That record at the time was held by Shankland at age 16.
One of the strongest level tournaments locally is the Golden State Open Tournament hosted at the Crowne Plaza Hotel in Concord. (Currently moved to Online on ICC, Internet Chess Club due to COVID). Yoo has participated in this, but his goals now require even stronger competition.
“He’s trying to become a Grandmaster. To become a Grandmaster, you must do well in super strong tournaments,” Yoo says.
He makes money playing chess but not enough to cover expenses. He made “$15,000 in prize money in 2020, which doesn’t cover his traveling and coaching expenses. Before COVID-19 – he traveled one to two times a month to compete in tournaments, mostly out of state, sometimes out of the country. There’s not much opportunity for tournaments of play at his level locally.
He also was awarded a $21,000 fellowship from the US Chess Trust
As Harmon did in “the Queen’s Gambit”, Yoo has also played in several simul-games. (when one player plays several other opponents at once.) “The largest one was against 30 players. In all, he has played now over 100 simul-games and has won them all except for one draw.”

Coincidentally, that draw was against Mike Treschler, founder of the Contra Costa Chess Club.
“That’s my one claim to fame.” Treschler admitted humbly.
Yoo has also won many medals in composition challenges (often seen as puzzles in publishing).
In this, contestants anonymously submit “compositions” that they’ve designed. At age 13, Yoo won the bronze in the FIDE World Cup endgame competition. He has also won gold in the Youth Chess Composition Challenge.
Two of Yoo’s puzzles are on page 8 of January’s Diablo Gazette, an easy to moderate level and one so advanced that even Grandmasters needed hints to solve.

To learn more about Shankland, schedule a training session, and learn about his books and video courses visit: https://samshankland.com/#post-408.

(David King contributed to this article)