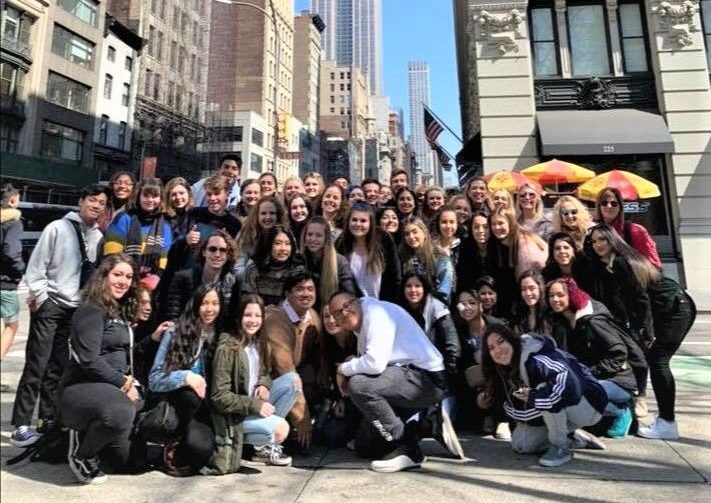 During spring break, the CVCHS Choirs, under the direction of Elizabeth Emigh, competed in the Worldstrides OnStage National Choral Competition held in the majestic Riverside Church in Upper Manhattan. Schools from 12 states and two Canadian provinces were represented at the musical competition.
Exposure to an external, competitive musical experience provided our choir and band with opportunities to challenge their talents and recognize their full potential on the big stage. In April, several groups from the CVCHS musical program were selected to perform at famous New York City venues and were able to work directly with world-renowned conductors and judges.
CVCHS’ Concert Choir, Women’s Ensemble, and Show Choir were all awarded gold medal rankings in their respective divisions. Additionally, our Women’s Ensemble was awarded a coveted Adjudicators Award, earned by scoring above the 95th percentile in their division.
On another note (no pun intended), fifty-one members of the CVCHS Wind Ensemble, under the direction of Lydia Lim, took the stage at Carnegie Hall for the National Band & Orchestra Festival. CVCHS was one of 24 instrumental groups chosen nationwide to audition and ultimately selected for the final performance – an honor reserved for only the highest performing musical groups. Our students were thrilled to play in front of their adoring friends and families in Carnegie Hall’s historic Stern Auditorium.

“It was such a wonderful opportunity to perform at Carnegie Hall,” said Sarah Kidd, a senior who plays the flute and will be attending CSU Long Beach next year. “Playing on the same stage as many famous musicians was a huge honor and an experience I will never forget.”
While in New York City, students from both groups also took in the sites visiting numerous landmarks such as the Lincoln Center, Broadway, Rockfeller Center, Radio City Music Hall, 9/11 Memorial, and Central Park.
I couldn’t help but reminisce about the lyrics of Frank Sinatra’s iconic “New York, New York”. I started my teaching career in New York City, so I know the kind of experience our students had on their visit to the Big Apple. They certainly left their mark on the city.
Both trips were tremendous opportunities for our choir and band members and the experience of a lifetime. I am pleased CVCHS students such as Sarah continue to have possibilities outside of the classroom to explore the global stage. It’s not just the exposure to new places that changes students’ lives, but also the experience they have during these trips. Congratulations to our students, their families and our amazing music department staff. Play on!