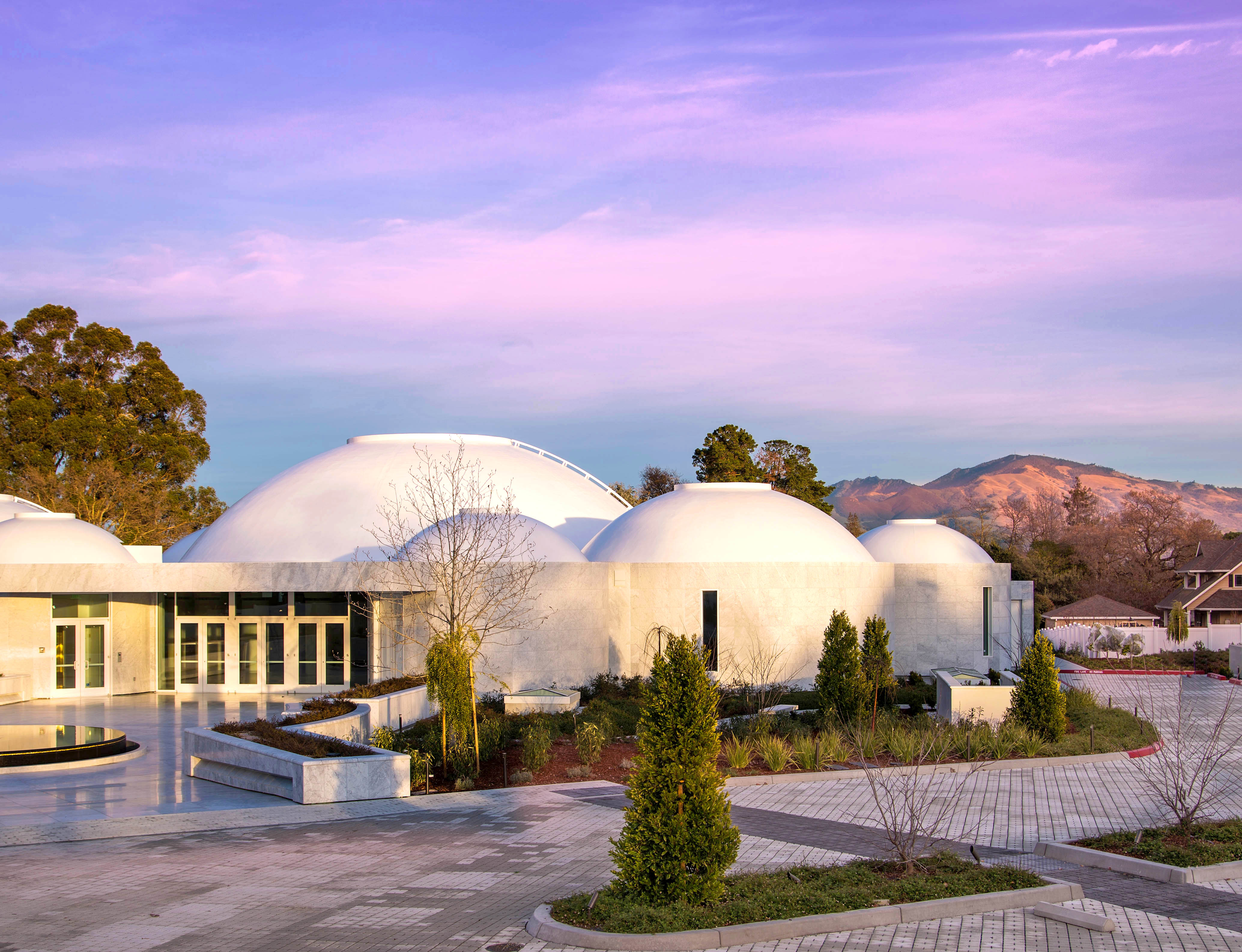 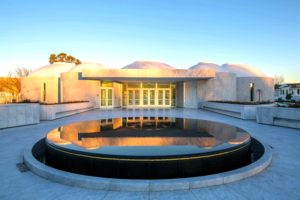 Amid the booming and chaotic development of Contra Costa County, an unexpectedly tranquil and nurturing new sanctuary has been quietly completed in Walnut Creek in the Saranap neighborhood. This astonishing $20 million temple is the new home of Sufism Reoriented, an American spiritual order with roots in the ancient spiritual tradition known as Sufism, but which has been reshaped for a life of service in the modern world. Very quietly, Sufism Reoriented has become the wellspring of an enormous outpouring of community aid to people in need in Contra Costa County.
Dr. Carol Weyland Conner, the murshida or spiritual leader, describes the group, “Sufism Reoriented is not a religion, but a spiritual path of the heart and love is its essence. It is based on principles of universal love and selfless service—active love for God and active service to God’s world.” Avatar Meher Baba created Sufism Reoriented in 1952 to help Westerners who aspire to live the highest principles of divine love as the central focus of their lives. The order is both a school of inner development and a community of shared outer life and work.
Meher Baba once said, “To end all starvation of body, mind, and heart once and for all is the birthright of every human being.” So, in recent years, Murshida Conner has founded major community non-profit programs aimed at eliminating hunger and poverty in Contra Costa County. The White Pony Express Food Rescue program has rescued over seven million pounds of fresh, high-quality food from supermarkets. Every day, seven days a week it delivers three tons of fresh food free to non-profit groups feeding the county’s hungry people. The Free General Store has distributed over 500,000 items of new or like-new clothing, shoes, toys, and children’s books free to people in underserved county neighborhoods.
When Murshida Conner learned that two homeless people had died from the cold, she began the Cold Weather Clothing Project. It has distributed over 10,000 winter articles to homeless people —warm coats, hats, gloves, tarps, umbrellas, and backpacks filled with items to ward off the cold.
The Francis in the Schools program serves children growing up in underprivileged inner-city neighborhoods who are often surrounded by poverty, crime, and neglect.
For forty years, Sufism Reoriented was quietly located in a former restaurant building on Boulevard Way in Walnut Creek. When it became clear that a larger center was needed to accommodate the group’s expanding work, Murshida Conner reached out to the firm of Philip Johnson Alan Ritchie, one of the world’s leading architectural firms. Philip Johnson had just passed away, but Alan Ritchie was so intrigued that he worked in collaboration with Murshida Conner to design the building.
Murshida recalls, “When I began this project, I never expected to build something on this scale. But fortunately, we are now living in a special time, a period of unprecedented affluence and abundance in our nation. And it is not by chance that our center is located here in California, in many ways the wealthiest region on Earth, singularly blessed with bountiful material resources and boundless energy and creativity.” It was largely financed by Cheesecake Factory owner David Overton according to online magazine SFCurbed.com.
“My primary aim was to create a beautiful building as an expression of our worship,” explains Murshida Conner. Overaa Construction who acted as general contractor and construction adviser wrote, “When the owner expressed a desire for a structure that would last not decades, but seven centuries, the concept was hard for the building team to initially accept: it would mean designing and constructing a building above and beyond code compliance. [The structural engineer, knowing about earthquakes, asked, ‘Do you realize what state you’re in? Do you know what happens in California?!’] Soon, however, the team realized the owner was serious the building was to endure centuries, and they embraced the task. As the project came to life, the team frequently commented that they were proud to be part of something that would endure beyond their lifespan.” 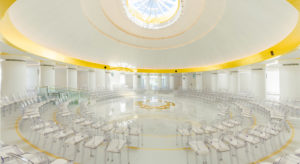 The new sanctuary is set on three acres. Two-thirds of the building is tucked below grade and topped with a green roof garden. Murshida Conner’s vision is that the area surrounding the sanctuary will become a serene park with flowered gardens, a place where neighbors and members can come for quiet contemplation.
On the ground level are the Prayer Hall, a multimedia library that is available to members, and an archival display room that presents exhibits of sacred objects.
The below-ground Concourse level is home to the working space. Sufism’s chorus, actors, dancers, and musicians use rehearsal studios to prepare performances. Artists work in studios to develop new creative projects, while video and audio specialists reproduce Sufism’s filmed classes and programs on spiritual themes. Here archivists maintain Sufism’s large collection of spiritual art and historical materials safely for future generations. Members utilize a fully equipped kitchen to prepare meals and dine together in harmony.
Tours of this extraordinary temple are available to the public. Visitors often leave quite moved. Recently, members of the Shadow of the Mountain Writers Guild visited the sanctuary and shared their thoughts with the Diablo Gazette.
“The East Garden of the sanctuary offers a breath-taking view of the beautiful flowering gardens and the building includes a number of skylights that allow an abundance of sunlight to flood the below-ground Concourse…”
“When touring the sanctuary, each guest is welcomed by a warm, friendly, and helpful docent, who is delighted to acquaint the guest with the history and purpose of each section of the building.”
“Lynne Westenhaver recounts, ‘I felt extraordinary peace in the dome-centered sanctuary, which offered an enormous light-filled space laced with glass that reached out to the greenery.”
Sue Hummel says, “After our visit to the Sufism Reoriented sanctuary, I feel enriched with new knowledge of the members’ lives, celebrating all life on earth and the divine.” Franklin Burroughs reflects, “I thoroughly enjoyed my visit to the sanctuary. It was both relaxing and uplifting.”
Douglas Burgess urges: “I recommend that everyone go on the tour and find out about Sufism Reoriented.’”
The Writers Guild concluded, “The two-story sanctuary conveys beauty and peace; an afternoon spent there offers an epic and relaxing adventure into the intriguing-but-little-known spiritual path embodied in Sufism Reoriented. Everyone in the Bay Area should visit the sanctuary of Sufism Reoriented.”
Information about touring Sufism Reoriented’s Sanctuary is available at:
http://tours.Sufismreoriented.org.