Why I Put My Baby Up for Adoption 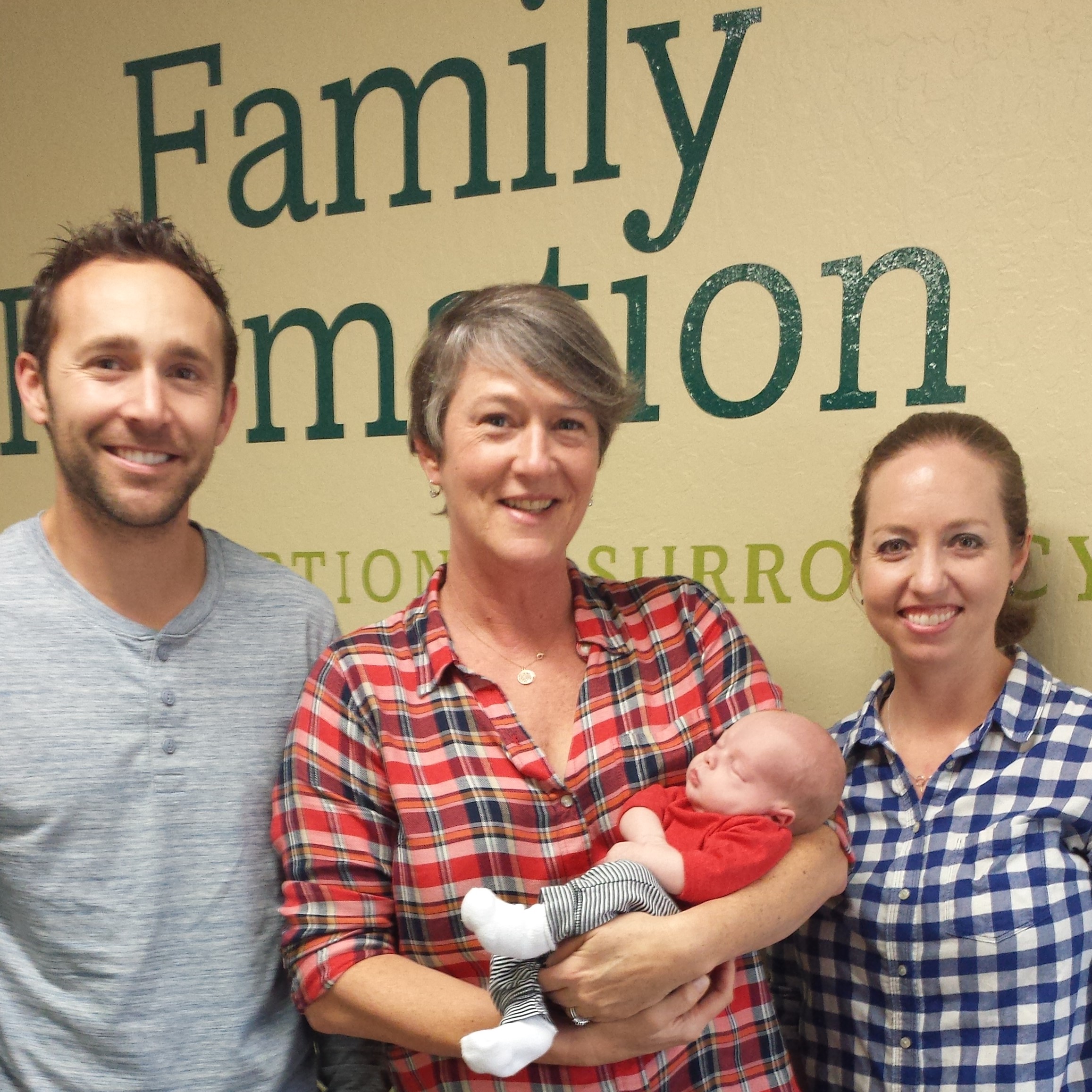 Megan Cohen is an adoption attorney based in Lafayette specializing in adoption and Assisted Reproductive Technologies.  Her passion for adoption began when she placed her son for adoption in 1988.  Megan took over the adoption practice from Diane Michelsen, the attorney who represented her in the adoption of her son.  Megan continues to have an open relationship with her adopted son and his parents, and has intimate knowledge of what it means to place a child, to choose the child’s parents, and to stay connected with the adopting family.  She lives in the Bay Area with her husband and two daughters.   She is the only adoption attorney in the country who is also a birth mother.

It’s hard to imagine the difficulty of circumstances one faces when considering an unplanned pregnancy. Here, Cohen leaves nothing to the imagination, as she shares her story in the most personal and emotional detail of placing a child up for adoption and the impact it has had on her life.

I put my baby up for adoption because I was scared and overwhelmed.

I had cancer as a teenager, and my doctors told me I couldn’t have kids.  So, I was absolutely shocked when I found out I was pregnant at 20.  I remember believing that I’d wake up one day and discover I’d made a mistake.  Maybe I just didn’t know how to take a pregnancy test.  Or how to read one.  Maybe it was a false positive!  But I had taken five pregnancy tests, and the truth was that I was totally in denial.

The thought of taking care of another human being overwhelmed me.   I was in school.  I didn’t have any money, and I was living with my parents.  I knew my baby’s father wouldn’t help (I was right), and I didn’t want my parents to raise my son.  I love my parents, but they had lost steam raising my sister,  their fifth child, born when the four of us were teenagers.  But it was more than that.  I had zero confidence in myself in just about every way.  I didn’t think I’d be a good parent.  I was too young, too selfish, too stupid.  The thought of how badly I could screw up a child terrified me.

I put my baby up for adoption because I knew I’d be taking on the responsibility of parenting by myself.  My parents would have helped in a very practical way, but emotionally, I was on my own.  I believe my lack of self-esteem had a lot to do with feeling like my family didn’t support me.  My family is fiercely loyal and loving in their own way, but they aren’t vocal about it.  I also didn’t want to live with my parents for what would clearly be an indefinite period of time.  I’ve been pretty independent my whole life.    I was the middle child always stirring the pot, causing trouble and getting in trouble.  When I found out I was pregnant, I felt so stupid, completely in character, and like a failure.  I felt utterly alone and knew my family would not be happy with me.

I had never once asked my parents for advice, and I wouldn’t this time either.  In my heart, I knew that these difficult choices were mine to make, alone.   I knew I wasn’t going to keep my baby and that I would be on my own dealing with the consequences.

When I decided on an open adoption, I didn’t want to tell anyone.  I didn’t want to hear their advice or opinions.  I especially didn’t want their judgement.  When I finally got up the courage to tell my parents, they paid for an apartment so I could live by myself and avoid interacting with anyone, including them.  My best friends didn’t even know.  I lost every single friend I had at the time because I didn’t return their calls, and I didn’t call them.  I shut myself off from the world.  To this day, my family does not talk about the adoption or ask about my son.

I believed I got pregnant for a reason.

I put my baby up for adoption because I was raised to believe abortion was wrong and it scared me.   I also had this sinking feeling that, given my medical history, this was the only baby I’d ever have.  So, I figured I’d gotten pregnant for a reason, and maybe the reason was that someone else was going to be my baby’s parents.  When I finally went to search for them, I had no idea what I was looking for until I found it.  My relief was immediate.  I felt like I was playing God giving this family another kid.  My love for them made it easy not to think about how I would feel at the hospital when I left without my baby.  They were kind and compassionate, smart and stable.  I knew that if I changed my mind they’d be okay with it.  I trusted them completely.  At some point during my pregnancy, I started to believe that this was their baby and that he had been theirs all along.

Adoption was my idea… or maybe it was my mom’s.

I gave my baby up for adoption because my mom told me to.  Well, not exactly.  I was 20 years old and afraid to tell my parents I was pregnant.  Anytime I told them something really stupid I had done, I’d start to laugh.   I didn’t want to start laughing when I told them this doozie.  I was afraid they’d think I was kidding and then I’d have to be earnest and passionate and convincing.  I wanted this to be a short conversation.  I had been stalling for months and had no idea how to bring it up.   I finally had the not-so-good sense to tell my youngish and cool aunt with the big mouth.

Did I know my aunt would tell my uncle, who would then tell my mother, his sister?  Probably.  All I know for sure is that I came home one day, and my parents called me into their room saying we needed to talk.  My dad was lying on their bed in a red polo shirt and black pants (why do I remember this?).   Mom was standing next to him and looked like she was about to jump on me.  “So,” she says in her church lady voice, “Do you have something to tell us?”

I don’t remember what I said next, but I do remember word for word what Mom said in response.  She looked at me with crossed arms and a stoney face and mumbled, “Well, at least we know you can have kids.”  And then, “So, what are you and whatshisname going to do?  Adoption?”  I didn’t think my mom knew me very well but now, I think she knew me better than I knew myself.  She said the word I had been afraid to say for months, and I looked at her and nodded yes.  Somehow, hearing Mom say the word “adoption” made me feel better.  The whole idea of pregnancy and adoption was suddenly less scary, and more important, my mom had given me permission.  She knew I was going to put my baby up for adoption, and we were going to be okay.

Leaving the hospital was the saddest day of my life.

I put my baby up for adoption, and it was the saddest day of my life.  On the day he was born, I wasn’t scared or overwhelmed.  I was broken-hearted.  I am ashamed to admit that I was also incredibly relieved.  I knew adoption was the right choice.   I knew Brendan would have the life he deserved.

As for my own life, it was wide open and in some ways a clean slate.  I had been through the hardest thing a woman could ever do, and I felt like a person reborn.  I came out the other side of my grief and loss and felt I could accomplish anything.  I wasn’t going to waste that feeling.  I was determined to make Brendan proud and to make a life for myself that he would be proud of (and he is!). I’ve kept in touch with my son.

I wouldn’t have done an adoption if I couldn’t have contact with my son. The family I chose has always been flexible, and for this I am grateful.  Most women want to know that they can stay in contact with the baby and the adoptive family, but not all.  Keep your heart and mind open as you venture down this path.  Contact can be as simple as annual photos and updates, which is what I did at first.  Some women want more contact and want to know that they can see their baby in the future.   I met Brendan for the first time when he was six.  I didn’t know how much contact I wanted with the adoptive family at first.  There were times I wanted more and times when I wanted less.  Now that Brendan is in his 20’s, my husband, daughters, and I see him a couple times per year.  I expect this will continue to evolve as my daughters get older and develop their own relationship with him.  Nothing is for certain, but I’m staying open to possibilities.  Adoption was the right choice for me.