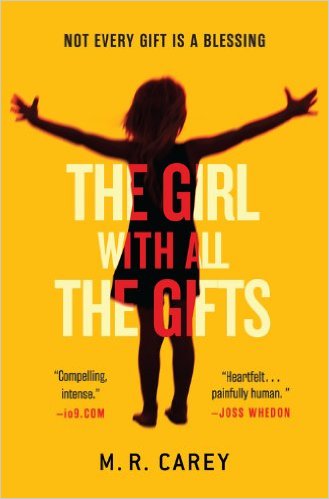 Fans of the hit television show “The Walking Dead” will absolutely love “The Girl with All the Gifts” by M. R. Carey (2014, hardcover, 416 pages, $24.33). This dystopian, post-apocalyptic thriller is the story of a ten-year-old girl, Melanie, whose life consists of an underground bunker, a diet of grubs, weekly chemical showers, and a classroom where lessons are taught by several different teachers. Her favorite instructor, Miss Helen Justineau, has a soft spot for Melanie who loves this woman as if she were her mother. Justineau’s approach to interacting with her students conflicts with Dr. Caroline Caldwell’s scientific view.

When their institution is attacked by a renegade group called Junkers, Justineau and Caldwell end up in the same getaway vehicle. The two women along with Sergeant Parks and his greenhorn recruit, Gallagher, rescue Melanie and are then forced to flee the safety of their compound and enter the world of the “Hungries.”  Thus, their journey begins to Beacon, their home base city. But when their Humvee breaks down, they are forced to continue on foot through what used to be hamlets and small towns in the English countryside, but now holds a dangerous horde of Hungries. Their trek lands them in London, where readers get to glimpse what the prior human inhabitants left behind—a reminder perhaps, about what is really important in our lives.

Similar to the “The Walking Dead”, the cast of characters in the novel adds a layer of intrigue that makes it difficult to put this book down. The conflicts and discord between these people, and Melanie’s continuous bravery in the face of horrific events, are what carry the story which might otherwise descend into gratuitous violence. Each member of the party, particularly Sergeant Parks’, willingness to listen to differing viewpoints as they try to reconnect with what is left of civilization, is a testament to human survival.

The book is definitely not for the squeamish. There are gruesome battle scenes and the descriptions of the Hungries can be downright bone-chilling. But if you are a tension junkie, covet a page turner, and believe a satisfying, but unexpected, ending is the holy grail, then “The Girl with All the Gifts“ is the book for you.

M.R. Carey (a pen name) is a British writer of fiction and comic books. He has written for both DC and Marvel, including X-Men and Fantastic Four. This novel grew out of a short story called “Iphigenia in Aulis” that  Carey wrote for a U.S. Anthology. He wrote the novel and movie script in tandem. The movie was released in limited distribution in U.S. theaters in October 2016 and was available through On Demand as of February 2017.