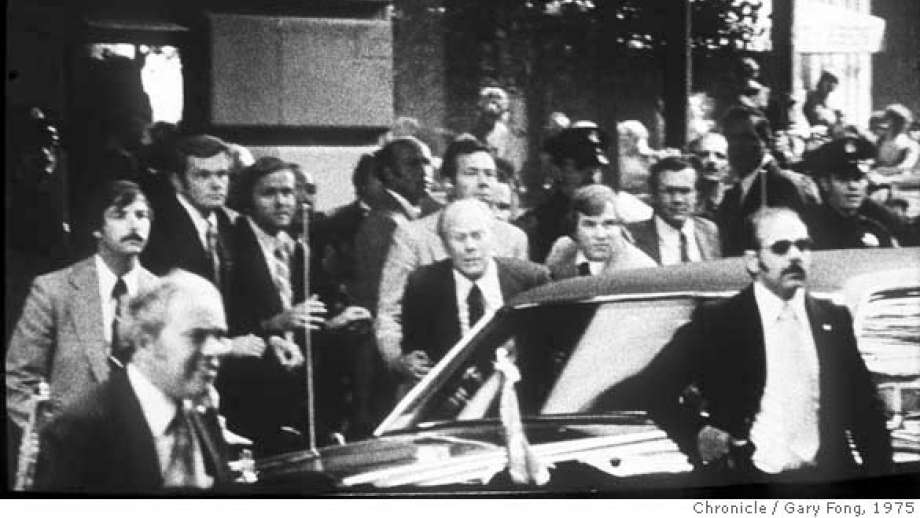 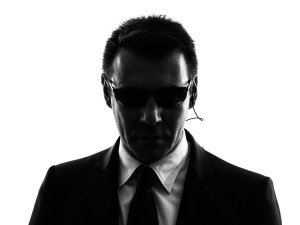 First impressions are important and often can tell you much about a person. President Ford always struck me as a no frills, no-nonsense, straight forward, kind of guy.  I knew he was an all-star center for the University of Michigan football team in the early 1930’s, and that he volunteered for and served in World War II and saw much combat aboard a carrier in the Pacific.

The first time I worked a Ford assignment was in 1997. The former president was staying the night at The Lodge at Pebble Beach. I was working the midnight shift outside his suite.  President Ford was expecting a 6 a.m. call from the general manager of the resort with whom he would be having breakfast and then a round of golf.  At about 5:45 a.m., Former President Ford’s suite door suddenly opened and the former president stepped out. He even looked like an old-school, former football player; big shoulders, square head and jaw and a crew cut. I said, “Good morning, sir.” He replied, “Good morning.” He then asked if the general manager had called (all calls to his suite were routed through our command post). I informed that he had not. “Okay, let me know when he does.” Ford then reached inside the door, pulled out his golf bag and golf shoes and placed them outside the door.  “I’m going to leave these out here” he said, then went back into his suite.

I couldn’t help but notice the condition of the gear the former President of the United States, who was about to play golf at one of the most famous and prestigious golf courses in the world, had just placed outside his door. His golf shoes were well-worn leather and old. Heck, I wouldn’t be surprise if they were actually his old football cleats from his University of Michigan days. His golf bag appeared to be of the same vintage and had definitely seen a lot of use as well as the golf clubs poking out from the top of the bag. Hanging over his driver was his golf cap. The official presidential seal was embroidered onto the face of the cap and “President Gerald R. Ford” was embroidered on the back.  The cap had once been black, but years of exposure to the sun faded it to a brownish hue. A sweat stain completely encircled the cap. There was nothing pretentious about this former president. He was there to play golf, not put on a fashion show. First impression confirmed: A no-frills kind of guy. 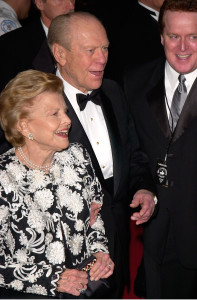 The next time I worked Former President Ford was about six months later.  He flew in to San Francisco via private jet from his home in Palm Springs to be the surprise guest speaker at an awards dinner for a large pharmaceutical company. Before the event, he would first come to the St. Francis Hotel where the pharmaceutical company had reserved a room for him to rest before the speaking event.

My assignment for this visit was “Site Agent.” As such, my responsibilities at both the hotel and at the event site, included coordinating bomb sweeps, name check lists, determining the number of agents and police officers that would be needed at the sites, where to post them, and to brief them on their individual responsibilities. Another of my responsibilities included being at the arrival site of the motorcade and ensuring the area was clear of all unauthorized personnel. The limo would stop with the rear right door directly where I stood. Once President Ford departed the limo, he and the shift agents would follow me into the facilities.

The entire evening went off without a hitch. However, there was one incident that amused me and further cemented the whole first impression thing. The vice president of the host pharmaceutical company and his secretary were scheduled to greet and welcome Former President Ford at the arrival of his motorcade on Post Street at the St. Francis Hotel. Both were so excited to meet the former president that they were a bit giddy.

(At this point I should interject a historical footnote: On September 5, 1975 President Ford attended a World Affairs Council meeting in San Francisco at the St. Francis Hotel. After the event, a large crowd had gathered near the motorcade on the opposite side of Post Street to catch a glimpse of the President. The cheering crowd was contained by Secret Service agents and officers of the San Francisco Police Department (SFPD). Agents were also pre-positioned at his limo and various other areas along the sidewalk and outside the hotel. Motorcade vehicles and Countless SFPD motorcycles had their engines running. It was a noisy affair.

Just before President Ford entered the armored limo, he paused to wave to the crowd. Immediately, over all the noise, the distinct sound of gun shots rang out from within the crowd. A deranged Sarah Jane Moore had fired two shots from a .38 caliber revolver directly at the President.   One of the shots came within a few feet of hitting President Ford in the head and instead struck the wall of the St. Francis Hotel just over his left shoulder. Agents immediately pushed the president into the armored limo and the motorcade swiftly evacuated the scene en route to the San Francisco International Airport and boarded Air Force I. President Ford later said that was the fastest trip he ever made to an airport.)

Now, without fanfare, media coverage, and a roaring crowd, Former President Ford’s  motorcade arrived at the Post Street side entrance of the St Francis Hotel. The limo stopped on queue so that the rear right door was directly in front of me. Minutes before, I had directed the SFPD to stop the pedestrian foot traffic on the sidewalk at a safe distance from the motorcade arrival point. The Detail Agents and the Detail Leader moved into position around the limo. When all appeared safe, Former President Ford stepped out. He was now standing in virtually the same spot he had stood 22 years before when Sarah Jane Moore attempted to assassinate him.

At this time, the exuberant vice president of the host pharmaceutical company and his secretary stepped forward to welcome Former President Ford. They excitedly shook the former president’s hand, introduced themselves and welcomed the former president to San Francisco.  They told him how honored they were to have him as their speaker.  As the VP rambled on, Former President Ford slowly turned his head and looked across Post Street. He then turned facing the pharmaceutical VP and gazed over the VP’s left shoulder at the St. Francis hotel, slowly up its height then across its length.  And in his slow, monotone voice, Former President Ford said, “You know, the last time I was here they shot at me.”

The VP and his secretary stood with their grins stuck to their faces, their eyes like two deer in the headlights. Of all the possible responses they had played out in their heads to their greeting of Former President Ford, this wasn’t one of them. The VP finally replied with, “Oh, right, right. Well, we have a nice room for you here to rest up before tonight’s dinner.” With that they began to walk to the side entrance of the hotel. The former president suddenly stopped, looked at his host and said, “I only have one request.” The VP asked, “Yes sir, what would that be?” Former President Ford raised his right index finger and replied, “That we be on time.” He then proceeded into the hotel and up to his suite.